Fett's past starts to catch up with him as the series' flashbacks recall more recent events....

While undergoing more healing in the Bacta-tank, Fett recalls his first meeting with Fennec Shand and the cautious deal that’s kept them together. As Fett goes in search of his ship and his armour, forces are rallied again them.

Meanwhile, in the ‘present’, the duo look further into forging alliances against the Pyke Gang – or at least keeping other influential forces off the table…

The latest The Book of Boba Fett episode is basically another entry of two-parts, one in the show’s ‘present’ and one recalling previous events – though the timing and scenes involved, suggests that the formula may be coming to an end.

The idea of seeing the differences between a Boba Fett who had just escaped the Sarlacc pit and the later one, changed by his time with the Sand People and determined to take over Jabba’s empire with a ‘fairer’ approach to profit-sharing, was an interesting set-up and it seems a shame that the show really only used the device to highlight the pragmatic connective tissue between the two strands until they came together rather than build on their individual potential. With viewers seeing the first meeting of Fett and Fennec Shand from a slightly different viewpoint (relating to the same events glimpsed at the end of The Mandolorian‘s fifth episode The Gunslinger) the window is closing and there doesn’t seem to be much more ground to cover unless the flashbacks get more abstract or selective.

After more contractually-obligated (if unnecessary) Bantha riding and the retrieval and ‘mechanising’ of Shand, Fennec wakes up back in the desert with Fett and his camp-fire (which seems an unusual set-piece along the lines of ‘Hey, wake up, I know you’re exactly where you fell over but you’ll never guess what happened and where I took you after you got shot and brought you back here!!!‘) and the duo make their formal acquaintances.The raid on Fett/Fortuna’s palace is okay, with some nice sets constructed for the purpose, though the duo get in far too easily. They are then confronted by ‘comedy robots’ that generally look more MST3K than ROTJ. Your mileage may vary on this time-filler sequence. When it’s time to get out, fleeing the base with the reclaimed Slave 1, the scene becomes a doff of the stormtrooper helmet to the Millennium Falcon exiting the Death Star docking bay as the ‘heroes’ come under fire from more nefarious forces. The piloting might not be as exact and the scraping along the walls is palpable, but it’s a good action sequence that should please die-hard fans.  There does seems to be some ongoing controversy over the name of Fett’s ship. It has been referred to as ‘Slave 1‘ but it seems that the moniker has caused some uneasy buttock-shuffling on seats with the notion that if you’re going to be portraying Fett as more heroic, he shouldn’t travel around in a ship that appears to celebrate forced servitude and the like. Thus Fett and the script refers to it here as a ‘Firespray gunship‘ just so as not to cause offence. Really?  It’s a ridiculous argument given that a) Fett was never meant to be (and still isn’t supposed to be) a generic good guy, even if the show is humanising more than the films…. he was a bounty hunter who willingly worked for the Empire and the least objectionable thing about him was the ship’s name and b) the Millennium Falcon clearly isn’t shaped like a Falcon either, so….

The scenes showing Fett and Shand subsequently returning to the Sarlacc pit to retrieve Fett’s original armour are also fun but make absolutely no internal sense. It’s been established that the desert-dwelling creature digests its prey over hundreds if not thousands of years and even if that’s an exaggeration (because, who’s going to check?) we already know that the material Fett’s armour is built from beskar/durasteel is likely the only thing that protected him while inside its gaping mouth/stomach/tendrils. Fett may not (apparently) remember exactly how he escaped and the role the scavenging Jawas played after he crawled out through sheer force of will, but logic dictates he must have been wearing the armour to survive at all – so the one place we could all agree the missing armour ISN’T, is in the Sarlacc itself.  By the end of the episode it all appears a moot point.

The medical care Fett has been receiving in the Bacta-tank (the flashbacks we see being played out in subconscious while he rests) is said to be over as well, though the system may have repaired his patchwork body-scars, there’s still at least one facial scar that remains which seems a convenient production design choice rather than the machine itself ignoring one injury because it decides it looks intimidating.

The Gathering Storm finally gives Ming-Na Wen more to do and bolsters the bond between Shand and Fett. Where we go from here in the next episodes remains unclear – there are three more instalments to go. Fett and Fennec are throwing together a rather rag-tag alliance with the Gammorean guards, Black Krrsantan (who, in the episode’s most dynamic interlude, demonstrates why C-3P0 wasn’t wrong with his gaming tips) and one late audio clue even suggests we might see some Mandalorian action… but whether this will all tilt towards more Magnificent Seven-like shenanigans or the more subtle Godfather-esque maneuverings remains unknown.  It’s still likely there are other forces at work behind the scenes and we certainly wouldn’t rule out a revelation that Jennifer Beals’ Garsa Fwip is an operator to keep an eye on.

The problem with the show is that in its all-inclusive homages that litter the production, The Book of Boba Fett sometimes feels like a sequence of footnotes and as a series it doesn’t yet have a clear identity all its own. All the ingredients are there and so is the budget to bring them to the screen, but Jon Favreau and his team don’t seem inclined to limit their scope. In the remaining three episodes he’ll have to decide exactly what it wants to be, rather than what it reminds us of… 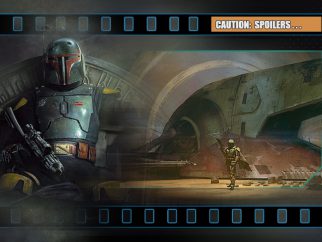