'Antebellum', now available on VOD, shows it takes a village to bring empowerment...

In a Civil-War era landscaped plantation, slaves are casually  abused and even killed by their ‘owners’ and despite every part of the brutalised Eden (Janelle Monáe) wanting to rebel she knows she must bide her time and otherwise remain silent, waiting for a key moment to rise again that she knows will come if she plans well.

In a modern city, Veronica Henley (also Monáe) wakes up in her comfortable bed, embraces her husband and daughter and readies to head-off on a trip to promote her latest self-help book. But when Veronica experiences some unsettling interactions with a female ‘journalist’ and then is abducted by people in a fake uber call-out – including familiar faces from that old plantation – could it be that the descendants of those old-time aggressors have come back for vengeance or is the truth something far stranger?

Antebellum: ‘occurring or existing before a particular war’

Over the last few years we’ve seen effective horror outings that speak not just to scares but also to the current social and cultural climate.  The likes of  Jordan Peele’s double-whammy of Get Out (2017) and Us (2019) infused classic chills and sometimes subverted, sometimes overt observations about race and empowerment. This year’s Antebellum, written and directed by Gerard Bush and Christopher Renz  (previously better known for video-shorts) and unfortunately denied a theatrical release by COVID, finally arrives this week on VOD and immediately asserts its membership to that legacy.  It’s likely a marmite experience: strong, confident and impressive, yet a mixture of  message and mystery, enigmatic in one scene and brutally on-message and to the point in the next.

The first third of the film is relentlessly depressing – it’s depiction of the brutality that people of colour openly endured in the pre-Civil War days of America is important and compelling but far from ‘entertaining’. Audiences may shift uncomfortably in their seats having expected a stylistic horror flick and and finding themselves in a powerful but a very different, human type of horror. The middle third, as the trailer for the film already revealed, involves that time-shift with some of the faces suddenly transposed to modern America. Monáe is now Veronica, a best-selling writer who has written books on coping mechanisms and surrounds herself with other self-help gurus and empowered women who may receive disdain from others but certainly won’t take it. It’s an awkward hand-brake turn that will likely have some cheering the overt and sassy, no-prisoners demeanor and noting the film’s comparison over how black lives’ matters have changed (or not) but wondering to where the film they’ve been watching so far disappeared… essentially unapologetically slam-cutting from Roots to Sex and the City. For the confused audience, we’re hopefully invested in seeing if and how the film will draw these disparate elements together, but it’s an ask.

It does so in the third act which explains the connection between these seemingly parallel lives and makes us reassess some of what we’ve ‘presumed’ rather than ‘know’.   It would be wrong – or at least too-revealing – to cite the influences you’ll recognise all-too-easily in hindsight, but it invokes themes and tricks rather than outright larceny – if only just. Your mileage will vary on whether that explanation is ultimately satisfactory and it’s likely that such an evaluation will make you see Antebellum either as the perfect, seminal film for 2020 or merely a well-intentioned, but heavy-messaged entry that doesn’t quite pull it off despite excellent efforts.

The performances are generally impressive. Janelle Monáe has been around for a while, known better for her cadence as a singer and voice-artist, but establishing her presence in films such as Moonlight and Hidden Figures. However Antebellum is her breakout performance and best showcase to date, demonstrating two seemingly diverse characters, Eden and Veronica, each with their own way of dealing with the world and what it requires to do so. In the modern world Veronica is the epitome of the modern version of success and a kind of ambassador for empowered black women, as Eden she’s almost totally silent yet able to cling on to that final inch of dignity with every fibre of her being. Two supporting players also make their mark: Gabourey Sidibe, who excelled in 2009’s Precious, is the battering-ram PR assistant  and Kiersey Clemons as the pregnant slave Julia each seize every opportunity they are given and run with them to notable effect.  Other characters such as Jack Huston’s Captain Jasper and Eric Lange’s Senator Denton/Him quickly establish themselves as the antagonist personas you’ll loathe, but the story runs the risk of making them so overtly villainous and immoral that they veer into caricature (despite us knowing such people existed and exist). That’s even more true for Jena Malone’s Elizabeth who clearly relishes her serpentine character but wears her sociopathy like a slingback and never really develops beyond various shades of “crazy bitch” motif.

Technically, the film is breath-taking in its ambition – from its opening long-track vista to its slow reveals  and constructed narrative blueprinting and with many aspects scoring a bullseye. Execution-wise… its reach sometimes exceeds its grasp because the film glides between deviously clever and sometimes too-clever merely for the sake of art, causing it to trip over itself as a contained story. Yes, there are some interesting ‘easter-eggs’ and continuing motifs that you may spot during a first viewing and which indicate which way the story may go if you take them at their  absolute word – and would likely make a second-viewing quite rewarding in its own right. But there are also needless quirks there only for mood – the presence of a young girl featuring in both time-periods and darkly fluttering around the edges of Eden/Veronica’s experience is largely there to tick a ‘Shining‘ visual check-box than play any real significance beyond that; the last moments of the story don’t quite fit into the final sleights of hand and some of the scenes feel like a bit of filler rather than necessary to an otherwise tightly-shot story. (Though the running time of about 1hr 45 minutes feels about right).

Definitely worth seeing, if only for the performances and ambition if not the complete result, Antebellum isn’t without some frustrating elements but certainly resonates. 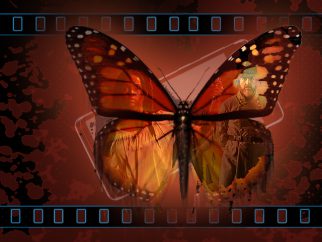