Tatiana Maslany will be heading up the Marvel / Disney+ television series based around the 'She-Hulk' character...

In what could be considered something of a surprise… it appears that Tatiana Maslany has been cast in the lead-role of Marvel‘s upcoming television Disney+ bound series based around their She-Hulk character.

The character was launched in 1980 as a simple female variant on the Hulk concept, Jennifer Walters being a lawyer who was the cousin of Bruce Banner and who received a blood-transfusion from him after an attempt was made on her life. The transfusion caused a reaction which made transform into a wilder persona and body-building proportions when enraged, though it quickly became established that she could retain her normal persona and not go quite as berserk as her famous cousin.  The character even joined the fantastic Four for a while. Even Marvel supremo Stan Lee acknowledged it was more an exercise in keeping the copyright than creative inspiration. However She-Hulk became a more nuanced character over the years and during the 1990s, under the guidance of legendary artist/writer John Byrne (who also shepherded her in the FF comic), she became a more self-aware, fourth-wall-breaking character. More recently she’s gone under more  serious and traditional trials and tribulations. 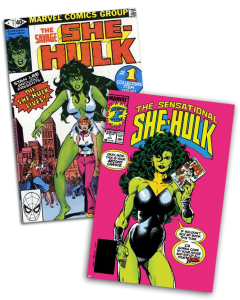 Though many fans were presuming that a more physically-intimidating actor might be being sort for the role it’s worth noting that it is not clear how much CGI will play a part in proceedings. For instance Mark Ruffalo’s facial features certainly factor in to his big-screen emerald alter-ego but the Hulk is largely realised in post-production.  Equally, Maslany has already proven a deft-hand at playing multiple-personalities and conflicted characters. She came to prominence in Orphan Black playing numerous clone versions of the same character, each with their own quirks. Most recently she was the troubled evangelical preacher in  the first season of Perry Mason.

Shortly after the news broke, Ruffalo tweeted a congratulatory “Welcome to the family, cuz!” message to Maslany.

It is not known the tone of the series, though the casting news comes only a few days after Kat Coiro (Shameless,  It’s Always Sunny In Philadelphia, Modern Family, Brooklyn Nine-Nine and Mozart in the Jungle along with the upcoming big-screen Valentine’s Day dramedy Marry Me set for 2021) was confirmed as one of the show’s  executive producers and main director.  Rick and Morty writer Jessica Gao will be heading up the writers’ room.

Other Marvel/Dinsey+ ventures in various stages of development/production include The Falcon and Winter Soldier, WandaVision and Loki.