Star Trek's 'The Red Angel' looks great and answers *some* season long questions, but is it as satisfying as one hopes?

There’s little doubt that the latest episode of Star Trek: Discovery looks beautiful, handled with grace and style by Hanelle M. Culpepper, who will also helm the opening episodes of the Picard spin-off (thus promising great things) . From shots of the ship’s interior to the wide open celestial areas of space to the grimy, warehouse hell in which Burnham founds herself bound, each shot is lensed with care and attention and a real sense of atmosphere. On a visual level at least, The Red Angel delivers on the weekly promise of quality.

We open with Ariam’s funeral which is lovingly shot, but once again there’s the issue of memorialising a character about whom we knew very little until last week and which is still being treated as a death of epic proportions akin to losing a beloved mainstay. That being said, the dulcet tones of  Saru (genuinely performed by Doug Jones) are as haunting as any on-screen eulogy you’ll ever hear. Then, as if someone checked the clock and decided there was limited time to deliver what they wanted,  we’re quickly on to the ‘Red Angel’ revelations.Story-wise?  This feels like an episode that is arguably more style than content – and that is despite major revelations (or maybe because of them as this starts to feel like a massive infodump of epic ‘Really?‘ proportions). It’s an episode that will likely continue to divide audiences because while the emotional performances may be as good as ever – Burnham’s quivering lips and look of sorrow get their weekly look-in and are delivered by Sonequa with the usual aplomb, Tilly’s motormouth is in full flow and Section 31 stride around with suspicious arrogance  – the story feels full of stunning ‘Why didn’t you didn’t mention this before?‘ conversations to conveniently paper over previous plot-points.

I said in an earlier review that the solution to the Red Angel phenomena, whatever it turned out to be, would probably prove a let-down for some and (while there’s certainly more information and clarity to come in next week’s episode) what we do found out here is somewhat awkward if technically woven into what we’ve already been told or just assumed. It’s undeniably adds some more layers to the story (which is fine) but also feels like an almost soap-opera contrivance. For most of the season Section 31 have been dogging our heroes footsteps and proclaiming their intrigue as to what the Red Angel is. Now we have a situation where they apparently knew all along what it was and its origins, but were merely worried about its intent and implications. Essentially we have a series of confessionals that join a lot of dots but feels rushed and convenient. It’s either a compelling, exciting twist or a convoluted contrivance depending on your viewpoint.

There’s also the repeated Discovery narrative quirk that seems to have scenes being written for the needs of the episode and then characters’ actions made to fit it: veering between leaning too heavily on expected character-quirks for exposition or making them act entirely out of character for the sake of that plot-point. For example, Tilly once again walks in to deliver her requisite ‘I’ve just found the one piece of information that could save the day and will deliver the news is the most awkward way possible‘  scene. Despite her phenomenal lack of bedside manner,  brusque Admiral Cornwell is suddenly revealed as having  highly unlikely training as a therapist (akin to having Captain Kirk be a spokesperson for abstinence)… and totally evil, ex-supreme ruler of the universe Georgiou is more and more being written as a slightly duplicitous but maybe-not-that-bad potential ally who , deep down, actually cares (presumably because you can’t make a new spin-off about someone who isn’t remotely sympathetic).  It’s as if the subtext has become the text, the connective tissue has become the muscle and all of it seems inelegantly stretched or squeezed to fit the allotted running time.

Newly reborn doctor Hugh Culber inexplicably walks around the Discovery as if he’s just walked off an Esquire photoshoot with the kind of suit that screams the highest 2019 bespoke tailoring but distractingly out of place on the ship (in any other show you’d expect a product-placement ‘Wilson Cruz’s clothing provided by….‘ in the closing credits.)

All time-travel stories (involving pre-destination paradoxes and the ideas of ’cause and effect and cause’) can induce headaches and there needs to be some internal logic whatever route you go down. It’s not entirely clear the state-of-play Discovery by which is steering, but it seems ill-advised that Burnham is kept fully-informed of all aspects of the ‘mousetrap’ being sprung if the entity is believed to be her future self and must therefore know of the plan. (Has you nose started bleeding yet!)  There does seem to be a danger that Michael is becoming more than just a compelling character, but the Trek equivalent of X-Files‘ Fox Mulder, with every narrative road legitimately leading to her or her lineage –  rather than Spock’s more astute observation that she’s simply got a pathological guilt issue and martyr complex. However, the final scene shifts expectations from what we’ve been told all episode and though it’s a legitimate surprise, it successfully shifts a purely science-fiction plot-point into a potentially rich emotional one. We’ll see.

Star Trek: Discovery is still a solid sf show deserving of your loyalty and full attention and is delivering on a lot of its potential – there’s certainly much to admire and praise – but here’s hoping that the last episodes of this run and the announced Season Three shift the focus into boldly going rather than spectacularly meandering… 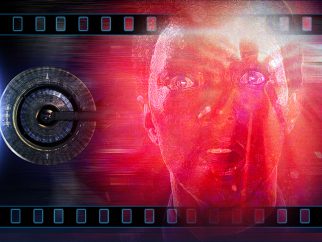