Something wicked this way comes, but is the modern Hallowe'en (now on DVD) more about message than massacre?

Forty years ago, Laurie Strode (Jamie Lee Curtis) was the only survivor of a horrific massacre as Michael Myers turned the holiday of Hallowe’en into a buzzword for bloody murder. Though her physical scars healed, the mental ones did not and she always believed that the almost supernaturally-empowered figure would find a way to escape his decades-long incarceration and come for her again. Despite two unsuccessful marriages, her personal life has remained withdrawn and troubled, her daughter removed from her custody years ago and with whom she has only the most tenuous connection.

Now her daughter Karen (Judy Greer) has a teenage daughter of her own, Allyson (Andi Matachak) and refuses to be drawn into the preparations for conflict that Laurie appears to live by and drilled into her offspring. Nevertheless, she persists.

But as the anniversary of the massacre arrives, two journalists arrive to dig deeper into the infamous events and the decision to transfer Myers away from his current prison brings fateful consequences. Now the Strode family and the town of Haddonfield will have to face up to unimaginable horror one last time…

There’s no doubt that the original Hallowe’en, directed by John Carpenter, was a milestone for the horror genre, casting a long un-killable shadow over the inferior clones that it inevitably inspired, some of which were its own sequels. So there was a great deal of unholy baggage to consider for a 2108 revisit of the now forty-year-old mythology. That it brings back original star Jamie Lee Curtis in both an acting and producing role is admirable and a good start, but let’s be honest, you go into the cinema with a hesitation that has more to do with the lack of expectation than anything approaching terror. The trend for mining nostalgia for a quick buck leaves more twitching corpses than almost all of cinema’s dreaded serial killers combined.

The actual result, directed by David Gordon Green, is far better than it could have been, a confidence that comes from its heritage and from mapping the original territory to begin with, all those years ago. It’s not the unfathomable, infernal mess that some expected and that far too many of its chapters had already fallen to. That being said, there’s something about the finished film that just misses the mark. In playing both to the beloved template of the original and tilting towards a story more geared to female empowerment, it never quite goes as far with either aspect as it could, settling more for uplifting moments rather than an all-out rallying cry.  There’s a line in the film where a character muses why the Myers story has lingered so long around the town of Haddonfield, given that a guy killing a handful of people with a knife is tragic but nowadays little more than an historical statistic… and beyond the sad and wider truth of that comment on society, it also reflects in the texture of the film. From the moment the titles appear to the ending itself, Hallowe’en 2018 is deliberately designed to reflect those 1970s blueprints. The marauding figure of Michael Myers, somehow a hollow human antagonist with only passing reference to the potentially supernatural, is still striking as a ‘name’ but he’s not so much scary as just an annoyingly relentless stalker, a Lifetime bad-guy with a sci-fi icon’s facemask. More fascinating is the decision to delay that remasking – letting us actually glimpse distance-shots or only small hints of the now unremarkable grey-haired bewhiskered prisoner who for all the legends about him could still be just another listless lifer living in silence. The scenes in the prison courtyard are the most unnerving, but once he dons the mask,  he and we are back on familiar ground with very few new tricks up its blood-stained sleeve. With the fantastical played down, he’s the horror genre’s equivalent of a computer pop-up – merely a slashing, hacking piece of malware that keeps appearing even after you’ve rebooted everything. He doesn’t make you want to run away screaming in terror so much as gnash your teeth, put your fist through the screen and get a restraining order.

In what is undeniably her movie, Curtis brings a weathered dignity to Laurie, the eldest member of the Strode family with Judy Greer and Andi Matichak also having their strong moments – the men of the piece fairly inconsequential and flawed – and in many cases, no real spoilers here… doomed. Though Michael’s victims aren’t all female, it would be churlish to not see the film framed in a #timesup and #metoo context. Hallowe’en 2018 spotlights Laurie, a woman whose life was dramatically altered by a terrible assault and whose life has been shaped and redirected by one horrible night beyond her control. Indeed, so convinced is she it could and will happen again, that every thing she has done in life since is with the presumption she is unsafe… and that she will be prepared when it all falls apart again. Unfortunately, that kind of story is not unusual, if usually less photogenic.

And as much as we see Laurie as a paranoid prepper, she’s sadly not wrong. A la Linda Hamilton’s Sarah Connor in T2, she has a clarity of unfettered vision – as a survivor of the unimaginable and unspeakable – that everyone else is missing.  Journalists want access to both her and Michael for their podcast to boost ratings, his doctor wants to see what makes Myers tick. Laurie’s mission, however, is simple and singular: she simply wants the ‘boogeyman’ gone from her life, her dreams and her memories. She knows that her family, the police and the community will be unprepared when he somehow seeks her out again. So she’s been making ready – or hopes to be. It is the moments that Laurie, along with Karen and Allyson, face their fears,  the way they play to and yet still subvert the stereotype, that actually prove the stronger and more memorable moments in a film that’s otherwise an affectionate tribute piece.

As a loving fan letter to the work of Carpenter, Green’s Hallowe’en is fine and if it drives audiences to look at some of the elder auteur’s other back catalogue, then that’s great – it’s full of classics. But as a horror film, let’s be clear: this one just isn’t actually scary.  You smile at the recreation of some familiar camera-angles and historical story-beats and you’ll enjoy some of the better pay-offs but there isn’t a single moment in the entire film that will truly raise your pulse. A few gorier moments cause its ‘R’ rating, but it’s telling that it would have taken a few meager snips rather than slashes to reduce the certificate to little more than a PG-13. In fact, I genuinely jumped more times in the more subtle and far more subversive Haunting of Hill House than at any time during this latest Hallowe’en.

There’s been a conscious decision to put ‘message’ before ‘massacre’ and that’s fine, but fear ultimately relies on surprise and anticipation and this latest film is powered more by nostalgia than nuance. 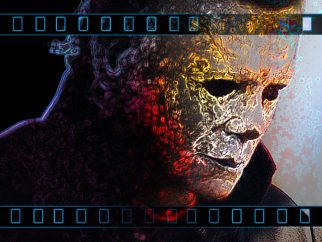 The Art of the Good Sheppard – Remembering ‘W. Morgan’…