Baby, it's cold outside and inside. M. Night Shyamalan serves up a dangerous domestic drama...

Dorothy and Sean Turner might appear to be the affluent Philadelphia couple with everything, but behind their front-door everything is not well. The truth is that they’re dealing – or not dealing – with a recent tragedy, one that has seen them start to secretly cope in very different ways. When Dorothy wants to hire a nanny for her infant, Jericho, so that she can return to work, Sean is reluctant but they go ahead. Leanne arrives, apparently short-listed from a friend-of-a-friend recommendation and appears competent but quiet and withdrawn.

However Sean notes how immediately devoted she is to Jericho and how seriously she takes a job, one that he feels could be far simpler in its duties than she makes it. But even as Leanne impresses Dorothy with her routine and nannying skills, Sean continues to have his doubts about this stranger’s place in their home and the changes taking place around him.

And then, one day, there’s a sound from the nursery… and their worlds begin to unravel.

While The Sixth Sense remains a worthy cinematic landmark that stands up to repeated viewings even two decades later, M. Night Shyamalan’s subsequent efforts have been decidedly hit and miss.  Critics liked Unbreakable, your mileage may vary on The Village and The Lady in the Water, but The Happening was universally slaughtered and the more recent Glass was generally a disappointment.  Something of a notorious multi-tasker,  I asked him several years ago as to whether he would be interested in either directing projects others had written or letting others direct his ideas. The response was a flat ‘no‘ which perhaps pointed to the problem that while Night has the gift of scary flair, he has often fallen in to the trap of not having a wider perspective on his results: just as clients are advised not to be their own lawyers, writers invariably benefit from not being their own editor and with no counter-balance, Shyamalan frequently fell into self-indulgence and ‘twists’ and reveals that were no longer original or that scary.

So it’s telling that while Apple tv+‘s new series Servant bares the Shyamalan branding it’s not written by him and  – so far – he’s only directed the opener (serving as an executive-producer going forward for the concept actually created by Tony Basgallop) and as much because of as despite that, it’s actually rather good: letting Night flex some creative muscles in the telling but also reining in his excesses, with other voices in the mix.

Cinema does standard tension well, but actual unease is a trickier more subtle cousin to get just right. Here, though, it’s delivered with just the right weight as we navigate through a house, a marriage and a series of events that are all just that little bit ‘off’. For a while you can’t put your finger on what’s askew. Yes, there are clearly problems in the marriage between Dorothy and Sean and new nanny Leanne is either an overtly- timid wallflower or up to no good (take a diabolical guess). But when all’s said and done, the first episode’s real ‘moment’ comes from something all-too-humanly shocking. If you know more about the initial premise of the story than revealed above, then you may see some elements coming, but the key ‘wtf?‘ attention-grabber comes about 2/3 of the way in and its singular power is more down to the sheer casual execution of a largely silent scene than any jump-shock could deliver.

Dorothy and Sean Turner are played with aplomb by Lauren Ambrose (Six Feet Under) and Yorkshire-born Toby Kebbell (War for the Planet of the Apes) and they essay a suburban couple just shrill and conflicted enough to be interesting – letting you walk the tightrope between sympathy and secretly wondering if they actually deserve their inevitable white-privilege, socialite, first-world problem suffering. Dorothy has the look of a wide-eyed, dinner-party hostess who’s secretly holding on to normality by the edge of her manicured finger-nails and Sean’s homebased, privileged pret-a-porter existence gives him a sense of entitlement. Essentially, they make the best kind of victims as their bespoke world is deliciously deconstructed in a very primal way from without and within.

Not that you’d know it from their decent American accents, but there’s other British talent at work here. The wonderfully named Nell Tiger Free (Game of Thrones) plays the new enigmatic ingenue nanny Leanne with just the right sense of foreboding, stillness and manipulative air to hold every scene and Robert Grint firmly shakes off his Harry Potter days as Dorothy’s somewhat subversive brother Julian who takes on the role of investigating Leanne’s background. Series creator Tony Basgallop was born in Brighton and is best known for writing duties on several incarnations of 24, Berlin Station and What Remains, so there’s a real transatlantic ensemble for a project that otherwise feels American down to its DNA.

It’s adult fare. There’s swearing, awkward intimacy, implied but not salacious nudity and some uncomfortable violence along the way, but the resulting mix of  considerable talents in one main location often feels like a piece of Harold Pinter theatre with more than a few touches of Shirley Jackson or an extended version of a Black Mirror entry. Servant‘s greatest trick so far is in the fact that its story could go in several different directions – are there real, supernatural efforts at play or merely a sinister, long-game plot? However that could also be its greatest flaw. It’s a balancing act and with a renewal for a second season already inked-in (and apparently a cliffhanger that will end the current run of ten episodes), the question becomes not only one of sheer creativity but practical pacing. The first three episodes were released together on 28th November with a weekly delivery of the remaining seven episodes takes us into early 2020. But mysteries often flounder when their reveal are dictated by the need for more ongoing content rather than the often more satisfying conclusion-led ending. At some point, Servant will have to make firm decisions and revelations rather than stylistic teases, because tensions and unease need pay-off to be truly satisfying.

So far we’re largely being masterfully unnerved rather than superbly scared. Yes, arguably it’s all patently absurd, borrowing elements from outings such as Rosemary’s Baby, The Doll and The Hand that Rocks the Cradle and there’s plenty of fair criticisms that could be laid at its creaking nursery door. However the mix is distilled down to some tasty basics that it serves with style. At the moment, this is a series that will keep audiences on their toes, not perfectly-paced (it could be too slow for viewers that often want everything sign-sealed-delivered in bite-size attention spans) but in no rush to spill all its secrets or conceits.

It’s not yet possible to draw firm conclusions, but if the rest of the run builds on the eerie promise of the early episodes, this could be a firm tick for Apple tv+ and for the fledgling platform after its other output had an uneven start… 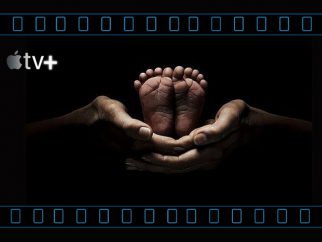