The BBC's alien-invasion drama finally made it to domestic shores...

It’s 1905 and George Lynton (Rafe Spall) is a journalist still looking for his first real scoop and facing the quiet wrath of his brother Frederick (Rupert Graves), a government spokesman, who has distanced himself from George over the latter leaving his wife for his truer love, Amy (Eleanor Tomlinson). Even if Amy could live on her own inheritance George is determined to prove to her and himself they can manage and survive the scorn of his brother and the local community.   However events that dwarf the sibling squabbles and townsfolk troubles are about to unfold.

Days after a local astronomer, Ogilvy (Robert Carlyle) shows George and Amy his photographs of Mars and some mysterious explosions he glimpsed on the red planet’s surface through his observatory, something streaks across the sky and lands outside Woking on the nearby common. At first the local townspeople and the gathering press think it’s a meteorite, or worse some sort of attack linked to the gathering storm of a European war.

They are all wrong… it is neither human weapon nor meteorite.  Beneath its crusty surface, unbelievably, is a vanguard vessel from Mars. Its passengers have come a long way… they have come armed and in great numbers. And they have not come in peace.

Now George may have a ringside seat on the story of a lifetime, but as the truth dawns…that the Earth has been watched for years by envious eyes… it may also be his last. As the countryside, the towns and eventually even London burn around them, can George and Amy’s love survive the aftermath of an apocalyptic invasion… and, for that matter, can the world?

As we recently noted, there are two versions of The War of the Worlds debuting before Christmas. ITV‘s alternative, contemporary take on the tale is set for a European arrival and was broadcast in other territories in November (with no UK date as yet) and the BBC‘s much-touted version, set in the original novel’s Edwardian England, has finally begun on British screens (after previous airings last month in both New Zealand and Canada).

Every generation gets the ‘War…‘ it deserves – Orson Welles gave us the infamous radio-play adaptation in 1938, Hollywood has the 1953 landmark movie that starred Gene Barry and Ann Robinson (that moved the action to  that era’s American homeland, but kept the basic concept).  John Christopher’s ‘The Tripods‘ books were clearly inspired by Wells and were turned into a BBC series for kids in the 1980s. Jeff Wayne’s concept album, originally released in 1978, but reworked multiple times since, still resonates. There was a US tv series that spoke to a second Martian invasion in the early ’90s and even Tom Cruise’s almost unrecognisable incarnation wanted a chunk of the aliens under Spielberg’s direction in 2005.

Nowadays, the modern Earth is saved on an annual summer basis by huge VFX and believable if fantastical cutting-edge tech, so there’s something quite important and meaningful about seeing this The War of the Worlds in its rare traditional time and setting… where there’s a genuine sense of a more basic lifestyle and people having the sudden shock and awe of attempting to survive against a far superior (at least in some ways) enemy. (Even the entertaining War of the Worlds: Goliath animated outing, set a few years later, went a stylised-steampunk route with its ‘sequel’) That’s not to say the mini-series’ period-setting removes relevancy, in fact – just as with period dramas like, say, Downtown Abbey – time and distance allow writing to mirror some current cultural parallels without coming across as preachy or too on-message. This is very much a version that looks at immediate impact crater and the bigger impact on lives and society; in essence we’re looking backwards on a society suddenly forced to look forward on a seismic level.

This Edwardian version takes a little time getting started… after views of what appear to be the Martian surface and something ominously exploding skyward, we intercut between an unknown object spinning through the great void and the more sedate problems of that era on our own terra firma.  The first episode spends much of its first half setting out the political and social landscape that we will later see so disrupted – the legitimate fear of conventional war coming to English shores, the ‘superiority of the white Anglo Saxon race’ being championed without irony and a class-system that doesn’t look kindly to horrendous ‘sins’ like divorcees or anything that doesn’t fit the traditional morals of the time.

And yet… while it scores highly in certain ways, there’s wholesale misses elsewhere. There’s definitely a feeling that this adaptation is less concerned with the middle-ground. We see how it starts and we see the aftermath, but anyone looking for a satisfying take-down of the Martian invaders might be baffled that to a large extent it is minimised, referenced obliquely and sometimes even off-screen.  In the books – a century-old spoiler alert! – the Martians are defeated by Earth’s microbes rather than firepower and though the same is technically true here, any sense of victory is edited out. The ‘victory’ is largely a phyrric one, arguably everything short of a wholesale defeat with humanity barely surviving, reduced to scrabbling around in the cold, red dirt. The revelation that we’re to-ing and fro-ing between those time-frames might keep audiences wrong-footed to begin with, but once their relationship is established, it’s clear how much connective tissue is missing and the result is largely a dour, almost nihilistic experience with only rare shoots of hope and regrowth.

As with so many projects nowadays, the wider problems are just as much structure. In other territories this was seen as a two-part story and in the UK it’s been divided into three parts and the sheer ability to be able to divide it in different ways  is quite telling. Few outings manage to broadcast the same material in different ways and keep the momentum feel organic and, by their nature -alien or otherwise – a two-parter and three-parter should feel different.  The two-part version perhaps suffers the most, with the second episode bearing the brunt of the weight of essaying the consequences of the initial invasion and yet the ‘future’ material, post-invasion feels like another beast entirely.

Cast-wise, we’re on firmer territory. Spall’s George Layton is a good if unremarkable man, escaping a bad marriage, resenting the restrictions society’s upper strata places on him but doing his best to navigate them. Spall plays him as an everyman, not particularly strong wise or initially brave, but trying to be decent in an age where reputations are everything and nothing. His new partner, the free-thinking, redheaded beauty Amy (Tomlinson) is a woman ahead of her time, also trapped in her own way by conventions and attitudes. But her character is utterly charming, her practical excitement at the arrival of the ‘shooting star’ is delightful and infectious…and it’s telling and foreshadowing that the opening lines of this mini-series – echoing the first words of the novel – are not actually spoken by George (or the unnamed male narrator of the Wells novel) but by Amy herself. In many ways, we find out soon enough- this will be as much her story as that of George.  This War of the Worlds tilts its focus to that love story, of two people separated by circumstance and, to an extent, time.

There’s able support from Robert Carlyle as Ogilvy the local astronomer who makes no moral judgements on George and Amy’s relationship and initially spots the explosions from Mars’ surface through his observatory. It’s also Ogilvy that wryly gets to point out to them that the chances of anything coming from Mars are about a million to one. Such meta-moments and touchstones are scattered throughout and it’s sometimes difficult to remember what’s from the original source and what came later.  Rupert Graves (Sherlock) provides a conflicted Frederick and the familiar characters of the priest (Nathaniel)  played by Jonathan Aris (also Sherlock) and the artilleryman (Harry Potter‘s Harry Melling) provide other perspectives.

All that being said, we’re on more of a Doctor Who Deluxe budget than feature-film finance and there are moments where the production’s ambition exceeds its grasp. It ultimately finds its levels through filters, judicious editing and strong use of location-work rather than that an all-expenses CGI remit, except when absolutely necessary. The tripods are a famous part of the classic story and they are intimidating, to be sure, but sparsely used and it’s more a case of what they represent – the great levellers of civilisation – that is scarier than their decent, if not actually spectacularly rendered, craft and weapons. (The height and stride of the tripods is impressive, but aspects like the initial heat-rays and their combustion effects smack a little of saving the budget for elsewhere).  The result, with a degree of irony – given its status and reputation as the grandfather of sf stories – is one that sometimes feels less like a faithful literary classic and more like an affectionate genre mash-up: one that can’t decide whether its greater influence should be the apocalyptic desperation of The Walking Dead or the stiff upper lip of Call the Midwife. It’s like tuning in for Downton and finding a dalek lurking in the grounds or Poldark suddenly being visited by a Predator.

Perhaps there has never truly been a definitive adaptation of this H G Wells classic story: subsequent story-tellers each using it as a different prism through which to view the problems of their day (this version tries to be speak to anti-colonialist ideals and unfortunately totally scuppers itself in the process) and a feature film in the original period setting is still the potential gold-standard if done right. But while the ambition in this BBC venture is admirable in some respects, the sum of its parts is desperately lacking, the pace is fatally uneven and languid and the execution inconsistent at best.

War is hell. But despite early hopes, this second-hand skirmish is too often purgatory… 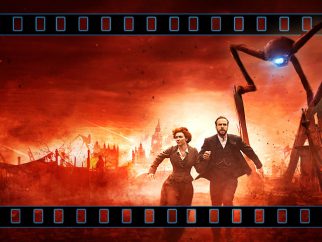