Tell don't show. Full of potential and yet full of indulgence, 'Old' is nothing new for the marmite M. Night Shyamalan...

A group of diverse holiday-makers have been given the opportunity to visit a secluded beach near their island resort. But when the children of one of the couples suddenly start to age, they realise that time is affecting them all.

They are ageing quickly, so much so that their life-span could be measured in hours not years. With no way off out of the cove and with the consequences of aging playing havoc on adults and kids alike, they begin to question what is happening and why… and more importantly try to work out a way to escape before it’s too late…

Years ago, fans loved the premise of LOST, a twisty ‘Guys, where are we?‘ desert-island metaphor for life and death and morality, but grew somewhat frustrated by six seasons of a narrative that also felt like it was making it up as they went along and ultimately swallowed itself whole. In many ways, M Night Shyamalan’s Old feels very similar – as if that entire run was condensed down into ninety minutes but with the same proportional degrees of intrigue and disappointment.

The idea of people trapped on a beach where they realise they are aging, almost an entire lifetime in a day, is full of potential on both a physical and emotional level – there’s both the mystery and the consequences of it, with which to play and dissect the human condition. There’s several ways to take the idea, but Old simply plays lip-service to most of them and, in doing so, creates a story that isn’t half as engaging as it believes itself to be.

Like or loathe, Old exemplifies ever opinion you have about Shyamalan’s main body of work and speaks to the problem of the film knowing its weaknesses and either throwing in dialogue to cover itself or ignoring the plot-hole completely.  Characters spout words that fall out of their lips like expositional excuses or forced foreboding (“I can’t wait to hear what your singing voice will sound like when it’s older…” is just one piece of  Chekov’s gun type dialogue)… so when someone wonders why their skin is getting thinner and yet hair and nails aren’t growing at the same speed as, say, an internal tumour, there’s a throwaway line to cover it… a ‘we’re asking you to ponder the great question of what’s important in life, but don’t ponder too much…‘.

That sleight of hand  is awkward enough but there are other moments in the film that will make you shift in your seat for all the wrong reasons.   Two characters who were pre-pubescent children just a few short screen-minutes ago (and just a few hours in story-time) end up having sex and getting pregnant. It’s mostly just off-screen with the camera insinuating what’s about to occur  but lingering like some awkwardly puriant eavesdropper, leaving no doubt of intent.  It might be meant to be chaste moment a ala The Blue Lagoon, but the quick inclusion of a line where boy-man Trent says he feels his brain and thoughts maturing so it must be okay, makes NO internal-logic sense and feels at best like a rushed studio note for some legal-covering ADR work caveat or, at worst, the equivalent of Michael Bay’s Romeo and Juliet clause / ‘honestly, not actually statutory rape‘ excuse dialogue in Transformers: Age of Extinction.

None of the characters are anything other than fairly crude archetypes, as stupid or as over-qualified as any scene demands of them, and therefore their maladies don’t strike home like they should. Gael García Bernal and Vicky Krieps play a couple on the edge of splitting up but lack any of the necessary chemistry to understand why they’re together at all. Their strained and sterile dialogue is almost as dry as the clunky way in which their children conveniently go around the resort at the start asking people their names and occupations in lieu of proper character introductions.  Rufus Sewell as an arrogant but clearly troubled surgeon dealing with his innate racism and what appears to be growing dementia, does his best, but there’s not a lot to work with. (If anyone wonders, the answer to his Nicholson/Brando musing is The Missouri Breaks, which doesn’t turn out to be any sort of clue).  Lovecraft Country‘s Abby Lee, as his trophy wife obsessed with her looks, gets the  predictable but better story-arc and ultimately stretches that PG-13 comeuppance as far as the certificate will allow. LOST refugee Ken Leung has a fairly thankless role, essentially an info-dumper until he’s dumped, heading off a supporting cast that slowly/quickly become collateral damage to the cause.

The ‘younger’ cast fare a bit better.  As Maddox, Alexa Swinton (who played AI Piper in NBC‘s Emergence) segues into Thomasin McKenzie  and then Embeth Davidtz as she ages to interesting effect. Nolan River, Luca Faustino Rodriguez and Hereditary‘s Alex Wolff and Emun Elliott follow a similar trend with the role of Trent.  Mikaya Fisher, Sharp Objects’ Eliza Scanlen have a little less to work with as Kara.

As in almost all Shyamalan films there are moments where you see the the superior thirty-minute Twilight Zone episode glimmering through – the core concept good enough to warrant the telling, but as a feature-film about condensed lives it’s ironically stretched way beyond its natural running-time by an indulgent writer/director who can’t help congratulating himself. It’s also hampered by a PG-13 certificate that limits the potential for visual horrors more than the psychological. For a while the unusual camera choices and framing techniques intrigue – sometimes less is more – but the more you get of the less, the less satisfactory it feels. Though adapted from the Sandcastle graphic novel by Pierre-Oscar Lévy and Frederik Peeters and containing many of the story’s original beats (so some of the good and bad aspects can’t be laid solely at the film’s sand-covered feet) Shyamalan still feels driven to put his stylistic, narrative fingerprints on it (and now the  almost embarrassing obligatory extended-cameo) and changes the ending to be less ambiguous than the source material. Its clinical footnote makes sense in some regards, but it feels like a quick-fix of a epilogue that’s being added that actually raises more questions than it answers.

At his ever-more-rare best Shyamalan demonstrates great and interesting cinema – at his worst it’s simply indulgent material hampered by affectation and stylistic ticks but often still worth seeing for singular moments and the task of working out how he just missed his intended target.  Old – which could have been a thoroughly thought-provoking and dark outing and even a minor tragic classic had its budget, certificate or a better script rose to the challenge – instead falls somewhere in between and, in that sense, is nothing new… 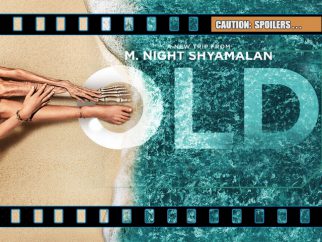