A super-powered actioner full of looney tunes... and an outing that certainly isn't painted by the num-numbers...

There are missions that heroes would refuse to take part in on principle. So when there are darker black-ops and questionable gameplays, it’s easier to send in a team where there’s huge deniability and no tears over their demise or carnage. They’re called Task Force X, but they often refer to themselves as ‘The Suicide Squad’ because if the mission doesn’t kill them, their controller Amanda Waller may well kill them herself.

When an unstable island nation looks to have an alien power in its territory, Waller sends in her teams to exterminate with extreme prejudice. But while there IS something star-fishy going on in the island’s almost-impenetrable bunker, there’s something super-fishy going on at an international level… and that means wiping out trace of involvement or complicity in a project that began decades before.

The ‘Suicide Squad’ will have trouble getting in… but who can they trust to get them out?

The Jackson Pollock of revenge outings, the Sex-Pistols of super-movies…let’s be blunt: The Suicide Squad is a total mess… but it is also an anarchic, spectacular, silly, R-rated mess that probably redefines ‘guilty pleasure’ on an epic level, depending on your mood. It might be a film you love or hate – and there’s ample ammunition for both sides of that argument, again, depending on your mood –  but it’s certainly, above all, an ‘experience’, a middle-finger to the comics-movie genre from a director whose career, trials and tribulations are mix-taped manifest on the screen. And it’s hard to hate any film that starts off its  soundtrack with a classic Johnny Cash number, Folsom Prison Blues.

You’ll have heard about the characters but probably remained in the dark about the plot. That’s no surprise because the story is hardly relevant to the film itself – the two hour running time essentially being a conveyor belt of set-pieces and banter. Concept-wise it’s largely The Expendables meets Deadpool. This is the third time Warners/DC has tried this potluck recipe – the first Suicide Squad was just an askew Avengers, Birds of Prey was Harley-centric and this outing feels, at least, like director James Gunn has fully-embraced the concept and put pedal to their mettle and let the subsequent vehicle plough through taste, decency and logic with a momentum that keeps the film and the audience engaged… possibly  because it’s intent seems more driven by anarchy than box-office algorithms. DC‘s weakness has been the lack of a coherent universe – Marvel fully trouncing them in that regard and making Avengers: Endgame one of the most satisfying pay-offs in modern cinema. But  Gunn seems to relish being free of those franchise elements and given breakable toys to clash together into pieces…  and there’s very little in the mostly self-contained The Suicide Squad that feels like the dictates of a studio wanting to set-up a wider narrative and future projects (excluding a, brief unlikely post-credit scene that positively wreaks of it).

Idris Elba assumes the central pillar of a conflicted anti-hero that Will Smith personified in the first outing – though through a different character, Bloodsport, not Smith’s Deadshot; John Cena has fun as the ironically-named Peacemaker with the likes of Daniela Melchior  impressing as  ‘Ratcatcher 2’. Viola Davis returns as the team’s ruthless boo-hiss controller  Amanda Waller (hardly more than a villain herself) with Joel Kinnaman back as Rick Flagg. There’s a lot of others characters to go around – though some are simply an early distraction destined not to survive the opening salvo and, in a trick of marketing that ultimately seems fair because of the premise itself, there’s some heavy-hitters and ‘star’ names reduced to cameo-like cannon-fodder casualties simply to make the point that almost no-one’s safe. Gunn mainstays Nathan Fillion, Michael Rooker and Sean Gunn certainly don’t fare well as you’d expect (though watch out for Pom Klementieff   – Guardians of the Galaxy‘s Mantis – and Taika Waititi in more subtle cameos) and you get the feeling that the director is actively embracing and undermining the absurdity of super-power selection and the survival expectations of the Marvel firmament.

Fun though she is, Harley Quinn has always been a difficult character for me to fully embrace. While she’s the poster-girl for fantastic turbulent wackiness, an almost walking-talking Looney Tunes character without the child-friendly stabilisers, her origins are as a thoroughly physically and mentally abused, used and fractured victim of evil, powerful men and too often the films have given us a bad-girl male fantasy made flesh and very little else.  One of the few characters you can guarantee will make it to the closing credits, this Suicide Squad decides to forego her origins or examination of her psychological issues and simply play to the ‘Napalm Barbie’ aspects and, ironically, it works better. In one escape scene, there’s some of the film’s best fight choreography and it’s combined with an almost Mary Poppins-like animation around her – again, working better as punctuation than some of the more overt CGI that populates the rest of the film.

There are certainly some bizarre and unlikely creations, though Gunn gives them some humanity – or perhaps huge manatee? Voiced by chief Expendable himself Sylvester Stallone (who hopefully wasn’t getting paid by the word this time), King Shark is a num-num delight. He may be no Draxx the Destroyer (essayed by Dave Bautista in Gunn’s Guardians…) but he serves a similar purpose as a character whose brawn (and bite) and lack of subtlety may be more effective than his understanding of the wider mission. David Dastmalchian’s Polka-Dot Man, who could easily have been played solely for laughs throughout, also has some unexpected poignancy towards the end.

Peter Capaldi has fun as The Thinker, with syringes sticking out every which way from his bald head and with a scientific arrogance of a specific gravity that almost needs another cranium. Gunn apparently hadn’t seen Capaldi’s turn in Doctor Who, but the actor delivers his requisite, passionate swagger and confident rant with all the gusto of a Gallifreyan anti-war speech or The Thick of It‘s Tucker in full flow and it’s a pity that the character doesn’t have more to do.

The film’s climax is actually a full-on CGI confrontation with Starro the Conqueror, the giant cosmic star-fish which was previously the maguffin of the film. The film pivots into a Ghostbusters-meets-kaiju conflict that takes the bizarre sf pulp-fiction look of the alien and manages to balance the absurd with the intense.

Like a bucketful of trifle, the entire package might be too much to ingest in one sitting, too overpowering and forthright despite its tasty ingredients, too much of a reaction against other superhero films in the genre. But the fact that  Gunn and his ‘crew askew’ manage to deliver such a crazy, visuals-led enterprise, yet still find time to sprinkle in some human elements and timely observations about nationalism and politically-hued underhanded hypocrisy is arguably admirable.

The Suicide Squad won’t be to everyone’s taste and it’s unlikely to get any Oscar love, but as super-silly, overt-OTT fun, likely to be seen by most on HBO Max but perhaps better viewed on the big-screen,  it’ll likely do adequate business in these still turbulent times. 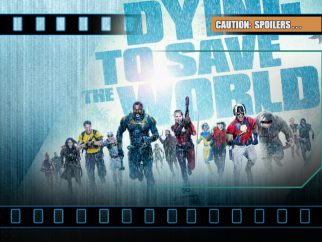