The spirit is willing and the action is wreathed in James Gunn's seasonally-silly but excellent advent-ure...

Far away on the planetoid of Knowhere,  Peter Quill is feeling a little lonesome. Gamora is nowhere to be found and his fellow Guardians realise that this strange human custom of exchanging presents may be just what their erstwhile leader needs.

But Mantis has a specific idea…. Peter has often spoken about his childhood heroes and their exploits, so what better gift to bring him than one of those? Mantis and Draxx head to Los Angeles in search of the legendary hero “Kevin Bacon”, determined to return with the gift-wrapped great defender of dancing rights. But first, they’ll have to navigate the LA night-club scene and the city’s police force.

And even if they succeed… can they remain fa-la-la-la footloose and fancy-free..?

And so this is Christmas – well, technically it’s still November, but given the creaking store shelves and the up-before-thanksgiving decorations, close enough. Though The Guardians of the Galaxy Holiday Special won’t suit everyone, the seasonal special mostly gets it right, treating itself as a fun piece of Marvel punctuation, never taking itself seriously, but absolutely taking its mission statement of being a fun, seasonal gift as seriously as anything you’d require at this time of year.

Yes, a lot of this is absolutely silly and absurd – but it’s also the seasonal kind of silly that gives it both something of a free pass from too strong a criticism and is of such a strong, singular mission of merriment that it absolutely delivers on the family-friendly atmosphere.  The secret is that Gunn  – sometimes a slave to the absurd – doesn’t remotely put the Santa-sized boot into Christmas, but embraces the spirit of it all. The Special takes the remaining Guardians and exposes them to contemporary Christmases, spotlighting an element of cynicism with characters who are perhaps understandably baffled (by the nature of society that fights for most of the year and then has a temporary gift-giving truce before returning to business-as-usual) and those who simply accept the idea of idealistic interlude full of wonder and hope in the moment.  Younger kids will love the unapologetic slapstick and fast-paced antics, older kids will love the banter and adults will enjoy the nostalgic elements, cloaked though they be in the modern Marvel manner.  A musical in all but official title, the piece is riddled with instantly foot-tappable and hummable tunes and songs that may have been created solely for the Special but (like Joss Whedon’s Once More with Feeling entry) somehow feel as if they must have been around for ages. One can imagine future Christmas mix-tapes getting a lot of replays. Kirsty McColl and the Pogues‘ rambunctious but weathered Fairytale of New York, with its bittersweet seasonal refrain, is perhaps the perfect book-ending music for the special (its timeless qualities intact, its more dodgy lyrics absent)

Some have accused Marvel of losing its way and having less sdirection than its initial Phase One stories. There’s some truth to that with recent entries feleing less than fully-formed, though it’s also clear that Marvel is flexing its muscles a bit, feeling its way beyond the generic superhero action remit that worked so well in its early years, but which culminated in the magnificent Endgame. In short, Marvel must try something different as they’re unlikely to repeat or surpass that unique mainstream achievement… and there will be hits and misses in the process.

Groot, often a mainstay of Guardians… outings, is more of a background player here and – once again – aged up. Given his more ‘oak-y’ physique, the character almost looks like an actual suited-up actor rather than being a CGI-creation voiced by Vin Diesel. Bradley Cooper’s Rocket gets some asides (and a great present at the end!) and Karen Gillan’s Nebula gets some nice one-liners as she’s dragged along as a wrangler of errant actors. There’s also some yesteryear framing in animated form featuring Kraglin (Sean Gunn) relating the story of how Yondu (Michael Rooker) apparently ruined Christmas for a young Peter Quill. Chris Pratt’s Peter is the crux of it all, the reason for the season’s mission, but his is more of a reactionary role, initially lonely, then angered then truly touched by what’s going on and why. But mostly this outing belongs to Dave Bautista’s Draxx and Pom Klementieff’s Mantis as they make a determination over what’s needed to cheer up their team-mate and then bulldoze through contemporary Los Angeles until they can deliver on it…  Their travels through Hollywood Boulevard and LA’s club-scene provides some fun if predictable scenes (two drunk Guardians was always going to be a set-piece waiting to happen) and their assault on Kevin Bacon’s compound goes as askew as you’d expect. But Klementieff is the anchor, nailing the silliness but also some of the heart-string pulling with a revelation that you’ll kick yourself for not putting together sooner.

Bacon, playing himself, is nothing less than a good sport throughout. The actor, whose resume is full of deeper, darker and critically-acclaimed roles over the years (and who, ironically, actually made his MCU-adjacent debut in Fox‘s X-Men: First Class) may secretly bristle every time ‘Let’s Hear it for the Boy…‘ gets played, but Footloose was indeed the master-track of many a kid of my generation… and though it’s familiar musical beats don’t feature here, the actor certainly embraces the spirit in good humour and throws himself into the mix with plenty of singing, dancing and prat-falls. Even his wife Kyra Sedgwick gets an audio cameo as he explains he’ll be late for dinner. (But, no, that’s actually NOT The Star Wars Holiday Special‘s Mark Hammil getting sozzled, though we thought it was too!)

The Guardians were largely wasted in the recent Thor: Love and Thunder feature. What could have been, with far less effort, merely a DVD extra, this new special – an epilogue of sorts to the current Marvel ‘Phase 4’ – amounts to something far better. Debuting over Thanksgiving and a month before Christmas Day itself, The Guardians of the Galaxy Holiday Special is an egg-nog antidote to the depressing news and the raft of darker series and stories that have been commonplace through 2022 and at around a forty-minute running-time, is perfectly pitched to entertain time and again, yet never out-stay its welcome… 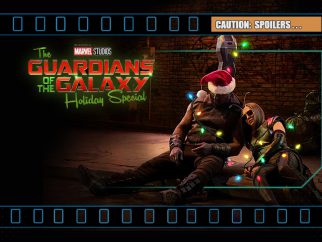