Two years ago, Scott Landon (Clive Owen) – the acclaimed mystery horror writer – was gunned down, leaving his wife Lisey (Julianne Moore) with only her memories of their life together. Physically, Lisey is well taken care of, a home an estate and her everyday needs met. But there are those who want Scott’s works to continue, for older unpublished manuscripts to be published, whether Lisey wants to or not – and will do anything to make sure that happens.

Lisey’s not interested in their scare tactics, but in slowly coming to terms with her grief, she’s wondering if her own memories and experiences of Scott’s life and work are as reliable as she remembers. What does she know, what has she forgotten? Scott’s works  came from a special place and may have a life of their own… and in them – and the riddles Scott seems to have prepared for her, may be the answers she needs…

Like all Stephen King  adaptations – or at least most of them – there are pluses and minuses to transferring his marvelous novels, mixing the mundane and magic that works so well on the printed page, to the show-don’t-tell temperaments of the screen. In this case, the screenplay for the eight-part series is also by the author and so the brickbats and bouquets can be firmly attributed to King himself.

Famously, King’s more modern work has been somewhat inspired by incidents in his life – a near-fatal accident in 1999 in which he was hit by a car (and suffered a punctured lung and a broken leg, hip and ribs) and, later, a serious bout of pneumonia in 2003 (the severity of which was linked to the injuries). Lisey’s Story came out of the latter as his wife Tabitha cleaned up his office and he conjured up the idea of how her life might have been if he hadn’t survived and constructed a fictional couple who have to deal with that.  King has said many times that Lisey’s Story is one of his favourites and most personal stories. But it’s a big book with its own problems in looking to change mediums.

Visually, there’s an otherworldliness about it all – the  frequent lens flare shifts perhaps a clue to the involvement of  executive-producer and King confidant J J Abrams, though the directing duties are firmly in the hands of Pablo Larraín (Jackie). The opening episodes feel almost like a stream of consciousness rather than a scene-setter and unless you’ve read the original book (and perhaps, even if you have) it’s a confusing, sometimes contradictory experience that meanders with no real imperative backwards and forwards across time, offering different versions of events that have more to do with memory than story. As a viewer adrift on that ocean with very little to cling on to and dictate a firmer direction, it’s initially frustrating from a story point-of-view – but those who have experienced raw, profound grief will likely recognise that abstract bittersweet feeling of something fractured and wrong, unchangeable yet fluid and difficult to put into conventional words. In essence, Lisey’s Story evokes a palpable sense of loss if not a sense of story-telling and it is that aspect that triumphs here while the latter treads water in familiar currents.

Julianne Moore is one of the best actors in the business, easily shifting between blockbuster films and more artful fare and it’s obvious why she was attracted to this production – both as an actor and co-executive producer. She fearlessly seizes every moment to embody a woman who’s been left behind in the wake of a tragedy, but also one already caught in the long shadow of a successful man whose influence, for better or worse, seems to reach beyond the grave. There’s dream-like moments, family issues also dealing with the fragility of mind and body, others of brutality and obsession – all King staples – and Moore handles them all with grace and grit.

If Moore’s performance is earthy, Clive Owen’s Scott Landon is more ethereal, a construct just out of reach and whom it is difficult to get a handle on when depicted through another’s lens. Moore and Clive Owen previously played a married couple in the acclaimed 2006 film Children of Men and though this is a very different story told in a very different way, it’s clear that they work well together and the on-screen dynamic as a couple navigating the hardest times continues.

The supporting cast are equally good. Lisey had three sisters in the original novel, though it’s wisely reduced to two here. Joan Allen and  Jennifer Jason Leigh play Amanda and Darla – with Allen’s Amanda drifting in and out of an almost fugue state but with some insights to offer and Leigh offering the kind of patient but acerbic wit on a sister can provide.  The quite prolific Ron Cephas Jones (think a less earnest Giancarlo Esposito) essays Roger Dashmiel, a literary professor who demands access to Scott’s unpublished manuscripts and who sets the unbalanced super-fan Jim Dooley (Valerian and the City of a Thousand Planets‘ and Amazing Spider-man 2‘s Dane DeHaan) on Lisey to achieve his aims. In that sense, all the usual archetypes are here, but they are background decorations, orbital intrusions to offer course corrections… and it’s Moore’s Lisey that wholly dictates the gravity.

All unmistakably Stephen King in its collection of elements, albeit in different concentrations, this feels more like one for the aficionados and those willing to settle in for a longer more meandering and less visceral  journey than the usual fare. Less ‘Misery‘, though there are some similar obsessive touch-stones, more  raw ‘grief’. Whether you’ll manage to go through all of the stages with Lisey, to finally find ‘acceptance’ will be the task.

The first two episodes of Lisey’s Story are now available on Apple TV+, with the remaining episodes being released weekly… 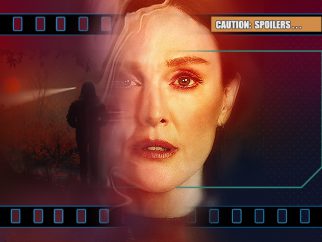