The devil is in the lack of actual detail conjured up in this third main entry in the modern horror franchise...

It’s the early 1980s and the exorcism of a 8-year-old David Glatzeis (Julian Hilliard) not going well. In a desperate attempt to save his girlfriend’s little brother, Arne Johnson (Ruairi O’Connor) tells the ‘entity’ to leave the boy alone and come for him instead. David appears saved, but in the months to come, Arne seems more and more distant, his plans to marry Debbie (Sarah Catherine Hook) thrown off-track by repeated hallucinations.

When a demonic entity appears to manifest in front of him, David strikes out, stabbing it 22 times – only to find out he’s killed his landlord Bruno Sauls (Ronnie Gene Blevins). David is immediately arrested, but paranormal investigators Ed and Elisabeth Warren, who were recording the original exorcism, are invested in his defense. It will be the first time that ‘possession’ has been used as a defense and it seems doomed to failure – so the Warrens try to track down the origins of the original incident and a longer history involving satanic rituals and curses.

But with the trial fast approaching and the Warrens met with ridicule and disbelief for their methods and investigation, can they hope to save David from a death penalty – or worse?

The Conjuring universe of films (which has branched out from the main movies – of which this is the third – to include ‘standalones’ such as the three Annabelle movies, The Nun and some shared-universe factors with The Curse of La Llorona) has done pretty well at the box-office with its old-school scares and decent VFX to scare up box-office receipts.

The recipe is relatively simple and involves an ethereal sleight-of-hand: take some real-life examples of reported hauntings, possessions and other assorted supernatural events and then under the banner of ‘inspired by a true story’ tell a far more fictional and embroidered tale that quickly pivots into more volatile and VFX territory. The standalone movies involve the origins of the legends and the main ‘trunk’ follows, Elisabeth and Ed Warren the erstwhile saviours of the piece – a devout suburban couple who just happen to be adept at taking on the sacred and profane. In reality, the Warrens were indeed established paranormal investigators, prominent figures in their controversial field of research, but they were hardly the bruised-and-battered reluctant action-heroes seen in this franchise. That’s not to say that the reliable Patrick Wilson and Vera Farmiga don’t give it their best shot, even if the material feels thin.

The Conjuring 2 involved a remapping of the infamous British case of the Enfield Poltergeist, done in effective style, but again slowly distancing itself from all but the bullet-points of historical record. For The Conjuring 3: The Devil Made Me Do It, the inspiration comes from the first case in US history where a defendant claimed he committed murder only because he was possessed by a demonic force (one that entered him after first traumatising his young brother).  That much – on a legal level – is true, the case is, again, a matter of public record  – but interestingly, instead of the film covering that case, it’s really an excuse: a starting point to send the Warrens off to discover the details of what the ‘demon’ might be and to track its history and origins.  Arne’s upcoming court case merely becomes a ticking clock restriction to their investigation.

The scares are fine in and of themselves, the VFX doing their job and the pacing cranking up moments of tension. An opening salvo showing David’s attempted exorcism starts a cheeky nod to The Exorcist and then plunges the viewer into spit, vitriol, twisted backbones and looks of terror. So far, every classic genre box-ticked. But then it all becomes far more sedate with lots of furrowed brows and flashbacks punctuated by dark shadows and gothic trimmings. Where previous director James Wan managed to make the scares and character-developments work together, Michael Chaves (whose work directing another urban legend-inspired outing The Curse of La Llorona clearly put him in contention for the main job) falls back into old-school tricks rather than making us invested. Truthfully, there’s very few moments here that unnerve in the way a good horror story should. Tension itself is fine and worthy and ‘boo!’ moments will always work to some extent, but a genuinely great scare comes out of nowhere, a jolt to mess with the equilibrium of a viewer whose already on the look-out for danger. Here almost every later moment is signposted  – and we’re simply patiently waiting for it to happen, so whatever the CGI-factor, it ends up proving far less effective.

The Conjuring franchise is slowly moving through the decades of ‘dead cold cases’, but there’s a danger of diminishing resurrections. One wonders if – with the proliferation of the paranormal tv shows,  we might one day be forced to watch The Conjuring: 13 with Josh Harnett as Zach Baggins in some widescreen version of his ‘look, just off camera, a demon!‘ Ghost Adventures, the original Ghost Hunters raiding some lost Ark or Hayley Atwell as Yvette Fielding shivering through a Most Haunted: The Movie?

The Conjuring 3: The Devil Made Me Do It is is in select cinemas and available on HBO Max… 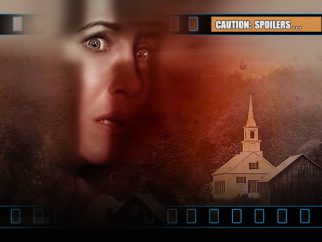