It's the pandemic apocalyptic fairy-tale we didn't know we needed and 'Sugar Tooth' tv adaptation excels...

The near future… and a virus spreads across the world, plunging society into fractured chaos. Though some seem immune, millions die and the world changes. At the same time, healthy babies start to be born – they appear immune to the virus but have animal characteristics, sometimes subtle, sometimes not. Labelled ‘hybrids’, it’s not clear how their sudden appearance is connected to the virus. Are they are a symptom or a cause? As is often the case, human nature fears the latter and the hybrid children are often abandoned, hunted… or worse.

A father, already tired of humanity, takes his infant son into the forests of Nebraska, hiding out in an isolated cabin far from other human eyes and slowly raises ‘Gus’ – who bears the ears and  growing antlers of a deer – doing his best to teach him to read and survive but keeping anything from the dangerous outside world at arm’s length, knowing what might happen if they are discovered. Nearly a decade goes by, but Gus and ‘Pubba’ will not be able to hide forever and when their world is eventually invaded by both the remains of the virus and unwelcome hunters, Gus’ understanding of the wider world is turned upside down.

His life is instinctively saved by the appearance of a tall, imposing figure named Tommy Jepperd, who understands the new world all too well, has no time for children of any sort …and certainly has no intention of helping Gus travel to Colorado to find his mother…

In an age where we’re all cautiously stepping out again, masks still clutched tightly in hand if not on face and nervous eyes and ears twitch for the merest sight or sound of a sneeze or sniffle,  a series about the aftermath of a pandemic that kills millions might either be the most prescient show or one that feels a little too close to home. But, in a hugely rewarding experience and unlike many of its genre contemporaries, Sweet Tooth arrives with something to say and goes for the heart not the jugular. In many ways, like its main character, Sugar Tooth is a hybrid of a concept – one part fairy-tale innocence, the other post-apocalyptic darkness. Perhaps best described as The Last of Us meets Bambi, or a JM Barrie-esque Mad Max it’s a combination that by all good reasoning, really shouldn’t work and yet it achieves that rare balance: a slice of whimsy amongst the wasteland, a show that might not quite qualify as an all-ages experience, but certainly one that should deftly appeal to a massive demographic.

It’s not entirely even throughout. For example, the  tension grows as we go along: third episode is considerably darker than the preceding two, upping the stakes and showing the real physical danger Gus and Jepperd face if and when discovered. (Up until that point, it’s been pretty one-sided and optimistic, but encountering a busy community brings actual, demonstrable peril). Equally the ‘side-stories’ that are slowly converging (sometimes interestingly, sometimes distractingly) including the continuing story of conflicted doctor Aditya Singh (Adeel Akhtar) and  a party inside a gated community shows just how far some members of his own neighbourhood will go if they even suspect there’s a possibility of ‘The Sick’ in the midst. The rather grisly outcome might firmly push the series into ‘Young Adult’ territory where, up until then, younger viewers might have been satiated by its hopeful content.

Amazingly, this isn’t some opportune project rushed out in the last year, inspired by covid.  Originally a DC/Vertigo imprint comic of the same name by Canadian writer Jeff Lemire, it was first published in 2009 through 2013 and has been around for almost a decade in one form or another, with a recent ‘sequel’.  The idea of a child and an ill-matched guardian sharing an emotional journey is hardly new. From Lone Wolf and Cub to The Road to Leon and countless variations in between, it’s a well-trod avenue and its individual successes are more to do with the tone and characters on that journey rather than the ‘quest’ itself. The on-screen adaptation began with the intention of it being a pilot for Hulu but a deal was made with Netflix for a full series and though the original comic-book was set in Canada series and the series – produced by no less than Robert Downey Jr. and Susan Downey – has Gus trying to get to Colorado from Nebraska, it was actually shot in New Zealand (one of the safest places in the world over the last year) finishing its filming early in 2021. The location also offers a pivot from the usual post-apocalyptic fare. Though cities get a look-in  as we follow other survivors who are destined to converge on the main story most of the scenes take place in expansive rural areas, mountains, hills, valleys and log-cabins, making the ‘end-of-the-world’ aspect seem almost a salve to current trials and tribulations. Certainly, it also has some timely observations on the human condition, good and bad.

Christian Convery as the young Gus walks/canters that difficult line of needing to be a wide-eyed innocent learning of darker realities but without making the character too twee nor too growingly-cynical. Completely engaging, he’s the kid who you root for even when he does something stupid or reckless, largely because of his total lack of guile, he’s on the same journey we are, to learn more of his origins and the changed world, but he does so with an optimism that’s long been missing from the likes of the more somber The Walking Dead. Nonso Anozie as Tommy Jepperd is just the right amount of imposing, a hulking figure but who plays Tommy as someone who is neither hero nor villain – just someone generally trying to survive with as little conflict as possible, but still retaining a sense of right and wrong in the process.

No supporting role goes wasted. Comedic actor Will Forte – not so long ago playing The Last Man on Earth – as Gus’ father brings a real humanity to a father trying to do the right thing in questionable ways. Though it will take you a second to place it, the book-ending narration aspect of the unfolding story ironically comes from James Brolin (the father of Downey’s nemesis in the Avengers movies, Thanos played by Josh Brolin) –  who here lends that gruff ‘settle-in and hear this tale‘ cadence to proceedings. It’s a kind of love it / loathe it framing device that will depend on your personal preference but shouldn’t interfere with your enjoyment of the wider presentation.

A well-managed package of good ideas and excellent execution, the pilot episode does have some effective CGI, but thereafter it’s mainly used for composite shots as some of the urban wastelands. Perhaps surprisingly, Gus’ ears are mainly animatronic, but while they could have been distracting in over-use, they are used sparingly enough to be very effective in conveying inner emotions.

Sugar Tooth is a series that gets under your skin – neither as saccharine as its title suggests nor quite as dark as the other  end-of-days shows that litter the landscape – but still feeling that alongside its animal magnetism, it has something deeply compelling to offer that will keep you invested and it’s hard to imagine anyone who sees first few episodes won’t want to stick around for the  full eight-episode ride…

All eight episodes of Sweet Tooth are now on Netflix… 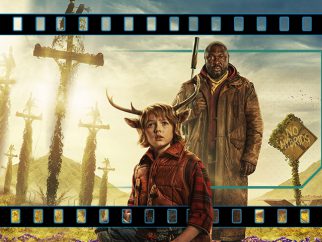