The chaos is definitely coming, but Loki's solo-series opener is more about middle-management than manic mischief...

If you’re given an unexpected exit strategy, you learn to make the most of it and when a captured Loki (circa 2012) finds himself shackled, surrounded by Avengers, smells two Tony Starks and yet suddenly has the Tesseract at his feet, he doesn’t ask any questions. He grabs the cosmic cube and ‘leaps’.

But unbeknownst to the ‘God of Mischief’, he’s now an anomaly, a ‘variant’ that shouldn’t exist. And that’s where the TVA – the Time Variant Authority – comes in, clearing up any messes that distract from the designated flow of time and avoiding the mess of a multiverse.

However, Loki (Tom Hiddleston) is used to making the commands not following them and this cosmic bureaucracy is his own idea of a personal hell. Not helping his own cause with his arrogance, Loki is about to be permanently deleted. But one of the TVA team,  Mobius M. Mobius (Owen Wilson), thinks that Loki’s complex survival skills might actually be what the TVA needs to defeat a force that seems to be playing wild and loose with history.

Can Loki play nicely or is he, more than ever, his own worst enemy?

For a character so built around being a force for manic chaos and self-interest, it’s unusual to find that the opening salvo of Loki – Marvel Studios latest and arguably most anticipated tv series – is positively restrained. Not so much burdened with Glorious Purpose more weighted by existential exposition. Much of its first hour is spent bringing the audience – and perhaps, more so, the title character himself – up to speed on what we’ve experienced since 2012. If you’re already here for the ride, the chances are you’ve watched Marvel‘s studio output and know exactly where we are already – even if it would be difficult to actually chart it out on a 4D Back to the Future like graph. (Time-lines! Infinity Stones! Multiverse! Great Scott!). The trick here is to be reminded that we’re now watching a version of the God of Mischief plucked from the end of the first Avengers movie and therefore bereft of any of the learning curves we’ve seen him navigate – returning back to a tarnished clean-slate, if you must. What’s past and future is prologue.

Loki is at his best when he’s sharpening his scorpion-like talons and duplicitous tendencies… and here he’s stripped of all the familiar tools at his disposal to do so. Though there are copious scenes snipped from various moments in the Thor and Avengers movies, they’re all anecdotes and flashbacks rather than genuine cameos. One could suggest that this cosmic incarceration is an opportunity to show Loki’s primal strengths and weaknesses as an agent of chaos – never more dangerous than when seemingly powerless – but though the whole series looks set to prove that very point, the problem in this ‘Glorious Purpose‘ opener is that he’s too casually and consistently thwarted throughout, too often swatted away like an annoyance rather than a credible threat. The God of Mischief helpless against a death by a thousand administrative paper-cuts from a bureaucracy that uses Infinity Stones as paperweights?  It’s a fun way to establish Loki’s predicament but it’s also constant ritual humiliation, further extended by often literal repetition, courtesy of fluid rinse/wash/repeat time-control. It’s a good idea to have Owen Wilson going for a metatextual, abstract ‘psych-eval’ to book-end the series and discover whether Loki is outright evil, misunderstood or driven by something else, but it’s all less compelling when you’re aching for more action than Loki darting down a corridor or looking indignant. By a third of the way in it’s been well-established that Loki is out of his depth and his own final realisation of that and his MCU-fate (and that of his mother) weighs heavy – but it could have been done in about half the time.

Given that Michael Waldron is show-running the piece it should be no surprise that it all feels like Rick and Morty do Minority Report and an almost Terry Gillamesque-meets-the-Coen Brothers convergence in style and tone. (Notably, Waldron has also penned the next Doctor Strange movie that deals with the multiverse, so expect some seams to be be bursting open along the way in that regard).

But, like all the Marvel Studios series launched this year, there’s a fluid mandate and it will likely be impossible to fully judge the show until it’s complete. WandaVision was an interesting, complex, pop-cultural conceit with marvelous moments somewhat let down by a morally-ambiguous finale. The Falcon and the Winter Soldier was marketed as a spy-fi buddy-picture that became more of a social-commentary reboot. A slow start is fine if it picks up momentum and, more than ever, a plot doesn’t have to be a straight-line, so there’s no reason it can’t keep asking some of the existential questions as long as Hiddleston is given a free reign to snark and raise his eyebrow in just the right way. Which is, if we’re being honest here,, what most have tuned in to see. Hiddleston, of course, is perfectly cast and can now do this role in his sleep and still entertain – but one hopes the script will actually encourage more. Owen Wilson’s Mobius is both fun and  also comfortably in the actor’s wheelhouse, this time a cosmic middle-management facilitator with an epic workload but a ‘let’s just get this done‘ approach that suggests ‘…as soon as I’ve got this infinite mountain of paperwork in order, I’m going to the beach‘.

There’s fun in the mix, though so far it punctuates the proceedings rather than drives them.  If you don’t blink, there’s a skrull cameo. The Ms. Minutes animation is essentially ‘Time-Travel for Dummies‘. Taking Quantum Leap‘s ‘kisses with history’, we already see Loki goes full smooch with the reveal that he was D B Cooper, the infamous robber/hijacker that stole money and disappeared from a plane in 1971, becoming an urban legend in the process and Loki’s verbal sparring endures. Somewhere in this mix there’s some very heavy questions about pre-destination. Loki rightly takes issue that every decision he’s made could lack any free-will and the very idea that his designated role in the cosmic order is to be the eternal loser, merely there to inspire people to do their best because he’s the obstacle they have to overcome. He scoffs, again understandably, with the notion of the TVA’s ‘Supreme Timeline‘ that must be protected, governed an stripped of any outliers that threaten its course – conveniently the cherry-picking TVA says the Avengers’ time-line-jumping was acceptable and part of the plan, but Loki’s dilemma is not. In/convenient – delete as appropriate).  He’s used to being a ‘god’ and being pushed around by bureaucrats is a fate worse than being Hulked.

By the end of the first episode we have some sort of idea of the possible identity of the deadly time-interfering force that the TVA is trying to actively thwart and to which our Loki is about to play his part. There are hints and mis-directions along the way – I can’t have been the only viewer to look at the stained-glass window in 1549 France segment and think ‘Aha! Theory confirmed!‘ only to have to severely question it later after more revelations. But so far the series isn’t soaring because it’s all ground-work, a first-day orientation,  an evaluation filed and rubber-stamped in triplicate, the balancing of the apple-cart that is needed before Loki can and will overturn it all.

Will Loki win? Should he? Despite himselves, it’s all to play for.

Loki debuts on Disney+ this week and will debut episodes weekly. 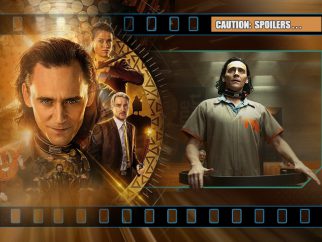