We're still on familiar, if soggy, ground as 'The Mandalorian' balances the scales for a fishing community...

The Mandalorian and his ‘cargo’ will have to lay low and to that end, the soldier picks a backwater planet where he figures they can pass a couple of months until the bounty-hunters pursuing them have moved on. But entering a small rural drinking establishment, he discovers that he’s not the only well-armed fighter in the vicinity. After an unorthodox introduction, Rebel mercenary Cara Dune (Gina Carano) tells him he’s stepping on her territory and the community isn’t big enough for both of them.

Readying to leave, The Mandalorian is approached by some nearby villagers who need protection from a group of marauders who regularly ransack their land. It seems like an easy job that he and Dune can share while biding their time, but it turns out that while farm-life provides a welcome diversion for the resting warriors, remnants of the Empire are never far behind…

A maverick stranger helping a group of imperiled villagers to stand up for themselves is another familiar trope from all things knight/western/samurai and general science-fiction and one that pushes no real boundaries here, ticking off all the essentials.  The Mandalorian and Cara Dune (played by Gina Carano, who was promoted as a major part of the series, but appears to be more of a guest-star) teach the rural fishing community to build barricades and traps (which, again,  seems like something that they would have already tried) and make them proficient kendo-stick waving hand-to-hand combatants in a single day. The story, entertaining enough, feels like an early Stargate SG1-outing, but with a  bigger production-design budget and with arguably better lighting decisions than Game of Thrones, even at night. The ensuing mini-mele, while hardly of Helm’s Deep – or even Endor – levels, is well shot in brisk fashion under the eye of Bryce Dallas Howard (star of Jurassic World, daughter of Ron and now only the second woman to direct a Star Wars project) on what appears to be the most restrictive budget so far – leading to a couple of memorable moments but mostly lots of pragmatic close-ups, standing dialogue and good use of props, taking the place of expensive and expansive wide-screen crowd-control.

Story-wise: set-pieces trump actual logic. For a plan to lay low, taking Baby Yoda strolling to a nearby bar, even on a backwaterlogged planet, might not be the smartest move. The whole idea that the Mandalorian never takes off his mask has mostly remained a quirky story-concept, rather than a practical consideration, up until this point. It makes total sense in the heat of battle or to disguise one’s identity, but code-of-conduct and tradition not withstanding, if you’re wanting to lay low, it would make more sense to lose the distinctive armour and I can’t have been the only viewer who wondered, when our hero was offered food, how exactly he was going to eat it? In the end, he does remove it for supper – we don’t see his face, but arguably a bunch of nearby ankle-biters could – so the exact reasoning does initially remain conveniently cloudy. However further conversations at least address the issue (It turns out he can remove the helmet whenever he wants, but if he goes out without it, he can never put it back on… the explanation to which Carano’s Cara delivers an almighty and somewhat understandabley unimpressed ‘That’s it?‘).

Carano’s Cara is a welcome addition to proceedings, giving us a character with an actual personality and a face and though designed for Carano’s action/MMA heritage (her introduction with a hand-to-hand fight certainly  playing to her strengths), we can only hope to see more of her and more development in future episodes- so far we know she was a Shock trooper, part of an elite squad who were tracking down warlords after the events of Return of the Jedi but who ended up unemployed and somewhat disillusioned. After more de rigeur cockpit cuteness to promote toy sales, Baby-Yoda is largely reduced to an observer here, though it’s clear he’s (she’s?) developing a worrying addiction to frog-munching. The other background creatures continue to weird amalgamations of different species conceived on a dare (this episode’s varmint is actually a remnant of Rebels, a Loth-Cat vaguely resembling a feline that’s swallowed a balloon).

It was tempting to think all the previous episodes had been set-up to a growing series mythology, but this continues the format of more simple outlier vignettes, the between-the-lines viewings of what happens when the cameras aren’t focused solely on Skywalker shenanigans, with future episode descriptions also sounding more like connective tissue drive-bys than actual fuller, evolving story-arc entries. In that sense, The Mandalorian continues to please but rarely surprise, offering welcome, well-executed staples of the genres it homages but ultimately little else. 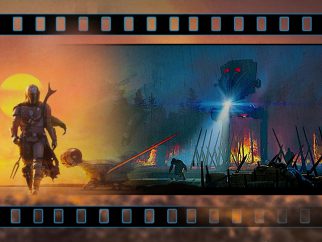 ET: Etc? There’s no place like Home for the holidays…