In the finale of this season of 'The Twilight Zone', meta meets anti-meta and a writer has to choose between a rod and staff...

A weary writer (Seth Rogen) ponders his inability to come up with a satisfying hook for his next project. Moving post-it notes around and staring at his computer screen doesn’t seem to be working… until he realises he can use a mushroom cloud and post-apocalyptic setting to start his story rather than end it. But when his tolerant wife (Betty Gabriel) enters and he starts to enthuse about overcoming his writer’s block, they go to the window to see a post-apocalyptic wasteland just as the writer described and then…

Y’know…this isn’t quite working for me… can we tweak this opening a bit? And can someone get me some more popcorn while we find out who that blurry guy in the back of the shot is? C’mon, let’s move it, people…

Yes, with a breaking of the fourth, fifth and umpteen walls,  this is certainly the most meta episode the Twilight Zonehas seen in its long history and the sudden – almost screeching –  left-turn (cleverly disguised in last week’s ‘coming next…’ trailer) as Jordan Peele’s stoic narration falters, signals one of those moments when viewers suddenly have to sit up straight and take notice that something unexpected is happening. So…. warning: spoilers!

Years ago, wunderkind writer Mark Millar was busy reinventing The Avengers into Marvel‘s ‘The Ultimates‘ in a side-universe story that would ultimately inspire the Avengers movies. Readers were not quite sure whether the version of Thor they were seeing was actually delusional about his origins and whether the idea of an evil-half-brother Loki was real. The eventual reveal that Loki was a genuine threat came with the nod to the fact that you could go back through previous issues and see a seemingly inconsequential but consistently-designed character in the background of several scenes who turned out to be Loki. It was a smart and savvy move that spoke to the designing of a subtle long game. If all else fails, then Jordan Peele has delivered a similar trick by putting a familiar black and white-suited figure in every episode of his Twilight Zone run to date – a character brought to the foreground in this final entry. (And, yes, this isn’t just a retrofitting for the finale, if you go back and check, the figure is really there, albeit sometimes without a ‘blurry’ effect.

Once again, though, the problems are that the episode stretches its main idea far too broadly. It’s telling when what could have been a genuinely affecting ten/fifteen-minute mini-episode tribute (a la Short Treks) to series originator Rod Serling, instead runs to nearly forty minutes with a good half of the episode being Sophie repeatedly stumbling through different studio sets (including a bafflingly abstract cameo from Jason Priestly).  Contractual restraints might have been the realistic stumbling block, but if the series shooting schedules had time to make sure it had footage of ‘monotone man’ existing each week, couldn’t a way have been worked out to get literally shoot a few seconds of Zazie Beete’s Sophie walking through an existing scene from each as it was shot, making her seem more cohesively integrated into the shifting Twilight Zone reality its promoting? That would have been more truly mind-blowingly meta than a few standing sets.

As a variation on the ‘Tonight on a very special episode of…‘ one-off stunt, the entry’s good intentions and obvious affection for the original show perhaps close-off some obvious and otherwise valid criticisms (and, after all, the last episode of Serling’s first series also saw a questionable merging of story and narration) and certainly there are moments to applaud and embrace as a fan.  However, beyond the unapologetic love-letter idea that probably worked better on the printed page, it lacks the sharpness and degree of true imagination of the subject-matter it is celebrating. once the point is made that Sophie’s reality is imploding as the real Twilight Zone ™ literally reaches out to her and the modern counterpart, it doesn’t need to happen time and time again in repetitive fashion. Equally it can’t overcome the ‘uncanny valley’ nature of deciding to recreate Rod Serling in CGI as the primo ‘gotcha!‘ moment  (creepy rather than wholly realistic). Again, if less is more, it might have been more savvy to keep the Monotone Man/Serling’s face out of sight and simply use the voice (more intentionally chillingly in its accuracy and provided by Mark Silverman).

More abstract in content and direction and largely devoid of the cynicism and cultural issues that have been the lynchpin of almost all the episodes to date, there’s no heavy message here except to accept your creativity and let that imagination shape your viewpoint and that such a sense of wonderment is always your passport to something better…. something that will ultimately be rewarded beyond sight and sound… in the Twilight Zone. 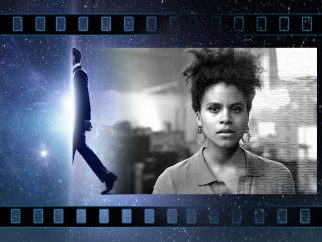