Charlotte (Allison Williams) could have been one of the world’s greatest cello-players, studying under the elite and demanding mentorship of Anton Bachoff (Steven Weber) at his exclusive musical academy. However her mother’s illness draws her away from that life and for well over a decade she becomes her mother’s primary carer. When her other eventually dies, Charlotte seeks to make contact with Anton again, trying to find some way back into a life that once nearly consumed her.  By now, Anton has a new protégé, Lizzie (Logan Browning), and they are in Shanghai to judge the final of a contest that will see the latest young recruit to receive Anton’s attention.  Charlotte is invited to join them and quickly makes an immediate, intense unexpected connection with Lizzie.

In the wake of the contest, they decide to backpack together for a couple of weeks, each relishing each other’s company and the chance to experience some freedom for the first time in a long while. But with news of a sickness in the country, Lizzie starts to experience symptoms that lead to a fateful choice…. and it soon becomes clear that Charlotte may have secrets and motives of her own…

It’s pretty hard to discuss The Perfection, Netflix‘s latest bound-to-be-talked-about film, without spoiling certain elements. It’s such a combination of styles that it’s also hard to know whether to recommend it as a grand-guignol slasher flick with a aspirations to be superior arthouse entertainment or a sophisticated thriller that eventually just decides to go for the jugular.

Sapphic pairings and rivalries are the in-thing in edgy drama (think Killing Eve) pulling in the ratings with sisters doing for themselves while also doing it to each other – for better or worse. It’s essentially burning the candle at both ends, indulging a traditional male fantasy while firmly creating strong characters for women to celebrate and that can work if there’s more to the wider story than such key elements. Here both lead actresses are talented actors with an obvious chemistry and the direction by Richard Shephard (The Matador) shows it’s entirely possibly to have an urgent, passionate sex scene that’s based on good visual and audio editing but showing far less explicit flesh than you initially think you’re seeing. Other directors could learn a thing or two. Indeed, Shephard’s skill – and those of his cast – also see him take a story that had appeared (from early marketing trailers) to be a budget rip-off of psychologically sinister Black Swan and imbue it with more than a touch of genuine, physical horror that you’d be more likely to see in the eastern markets.

Allison Williams was subversively cast in the Oscar-nominated Get Out and audiences will probably watch her Charlotte with more immediate suspicion because of that – but she portrays the damaged and frustrated character with a degree of depth to the extent you’ll like her to begin with, even if you have an inkling that you should question some of her motives. The fact she’d previously worked with Shephard on controversial tv hit Girls, probably helps. Logan Browning (Dear White People) gives an equally solid turn as the confident, more sexual and impassioned Lizzie who makes an immediate emotional and physical connection with Charlotte based on their similar experiences… before things get more complicated. Steven Weber, once a comedy stalwart, now often plays a flawed, seedy villain and here, as Anton Bachoff, the mentor for both girls, he certainly gives off a calculating cold and affected air, driven to seeking the titular perfection from his students and disappointed with any flaws. Alaina Huffman who plays Anton’s right-hand woman Paloma, has less to do, but still makes an impression.

The cello music throughout is intoxicating (with Williams and Browning learning to play convincingly for the camera with two months practice) and the young women’s bus-trip through a foreign country plays well  – the innate nightmare of feeling incredibly ill when you are far form home and not being able to get immediate help or understanding is one that’s probably been experienced by many to some degree and it adds an air of isolation to the story’s circumstances.  On the central story level, the film wisely doesn’t hold on to any of its deceits and sleights of hand for too long. There’s every chance you’ll see some of the twisted beats of the meandering (then careering) story coming, though it’s unlikely you’ll see all of them early enough to spoil proceedings entirely. The third act is something of a different beast and the ending itself is likely going to be divisive in more ways than one. On one hand there’s a nod to the #MeToo movement, encouraging women to take control of their own fates against those who would seek to oppress, but equally the style of the final acts of revenge may not be quite as easy to digest. Whether you roll your eyes, laugh or applaud loudly as the credits roll after a just-right ninety minute of orchestrated manipulation, will largely depend on your individual tastes. But though the film eventually overplays its finger-plucking hand – finally tipping from Brian de Palma styled scenes into full-on David Lynchian moments – there’s enough clever material to be note-worthy and it’s unlikely you’ll think you’ve completely wasted the entire hour and a half.

Perfection… no, but certainly a memorable melody that turns into a cacophony of carnage that proves a likely guilty pleasure… 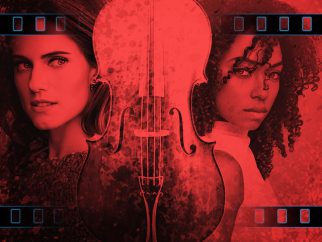