It's 'Not All Men', but does the latest 'Twilight' Zone tackle toxic masculinity with an actual toxin?

Annie (Taissa Farmiga) is a young woman who will usually bury herself in work, over-eager to make a good impression and will go more than the extra mile to convince her bosses how committed she is.  She’s not one to make waves. However when one of her colleagues, Dylan (Luke Kirby) asks her out on a date, the experience doesn’t go as planned. At first the expected meteor-shower across the sky proves a magical distraction, but then its intensity could indicate that there’s something else at work. After discovering pieces of the meteorite nearby, the couple return to Dylan’s home where he starts to come on to Annie far too strongly and resents her pleas to stop.

Annie manages to make her excuses to Dylan and leaves before he starts smashing up his home, but over the next few days it becomes clear that a lot of people are starting to behave badly…. they are more aggressive, ill-tempered and, frankly, dangerous to be around. And, Annie notices, it’s just the men.  Even her sister Martha’s (Rhea Seehorn) husband Mike (Ike Barinholtz) is suddenly willing to bludgeon someone into a bloody pulp. Only Annie’s nephew, Cole (Percy Hynes White), seems to be initially less affected…

What is causing the strange phenomena and can it be stopped before Annie and people she loves are hurt or hurt others?

Of all the Twilight Zones to date in this renewal, this is the one that feels most organic. It’s length might arguably still benefit from being a tighter 30 minute story rather than than the 60 minutes we get, but there’s a feeling of genuine mystery and organic momentum that’s been consistently missing from previous weeks.

Not All Men‘s best moments come when creating situations that the audience are, unfortunately, likely to recognise. Sadly, many women have had bad experiences on dates or in social situations, ones that range between awkward to downright scary and Annie’s fear when feeling trapped by a colleague’s insistent, forceful and entitled behaviour will likely send a familiar shudder.  Men are, by average, stronger and more physically imposing  – and moreso, often control social situations from positions of personal or work-related status and it’s that seething aggression and power-base that escalates as Annie looks for both answers and sanctuary.

Taissa Farmiga (The Nun) is good in the main role, convincing as someone who is wanting to please, but not devolving into an insipid, weak character. The men are largely brutes or rather ineffectual, as the story demands, though it’s good that Cole (The Gifted‘s Percy Hynes White) plays a young, gay character that manages to be neither victim or savior, but is the first to speak the truth of it. There’s a strong story here, a water-cooler subject to create discussion and it’s delivered well with a heightened potentially sf angle and a solid, important ending.

That’s not to say the denouement is perfect, the reveal/pivot is interesting and thought-provoking as any good ‘short drama’, particularly a Twilight Zone, should be… but the on-screen explanation could be just a bit clearer. The actual pay-off  has Annie noting that the scientific tests seem to suggest the meteorites were relatively harmless and essentially a placebo… that the growing levels of violence were more (literally) man-made not extra-terrestrial.   If there’s absolutely nothing in the rocks and it’s all just hysteria hinged on baser instincts (which the placebo line would suggest and is what I took away on first viewing) then it’s truly strange and unlikely that it is only men affected. (After all, several female characters earlier show they can be quite lecherous, but don’t end up going beyond that). It would seem more likely that the meteorites weren’t actually a harmless placebo but better described as a simple element that in the wrong hands becomes a fateful trigger: dramatically increasing testosterone or similar, maybe… It’s an important distinction that does nothing to dilute – and indeed should make clearer – the two points the important episode seeks to make: that women are often the targets of aggression and skewed dynamics…that  the physical acts of violence and aggressive behaviour are always a choice of the aggressor and that individual’s responsibility. Cosmic rock-falls or not, the actions of Dylan, Mike and many locals are because they allowed themselves to go with their heightened, entitled aggression, while Cole felt the impulse but actively stopped himself by choice.  The cure is not just restoring a chemical balance, it’s actually being a better person.

But of all the entries so far, Not All Men – directed by Christina Choe (Nancy), feels the best balanced and worthy of watching… 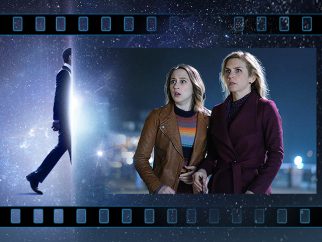