From Peter Parker to pixels parkour, Tom Holland is fun but wholly miscast in a generic PS4 adaptation...

Nathan Drake and his brother Sam have been shuttled around foster homes and orphanages since the demise of their archaeologist parents, usually getting into trouble and only narrowly escaping the consequences. When Sam uses up his last chance, he disappears into the night promising to come back and rescue his brother – but a decade on and ‘Nate’ has had to find his own way in the world – even if that includes some pick-pocketing and confidence trickery.

Then, one day, a man named Sully offers him a job he can’t refuse – the chance to put his skills to the test and also to find out what happened to Sam. But trying to locate long-lost buried treasure was never going to be easy and when you have competition that will gladly kill to stop you getting to the prize first, you’re going to have to be at the top of your game just to stay alive…

In the modern era, one medium feeds off another – and the film industry has been taking its cue from not just books but comics and games and vice versa. In many ways, that’s nothing new… but with the rise of technology (in both the gaming and cinema realms), the relationship is getting ever closer. Which makes the debut of Uncharted both an inevitability, a diverting-enough ninety minutes and yet something of a disappointment… because though the film (released at the multiplexes in February and now hitting the DVD and streaming platforms) manages to spectacularly reproduce elements of the original game, it does so so slavishly to the point of silly spectacle over solid story.

The film, playing like a nostalgic throwback, is already late to proceedings, having originally been scheduled for December 2020 before COVID ruined so many plans. But coming off the also-delayed Spider-man: No Way Home, Holland is a bigger commodity and selling point than ever.  It’s easy to see why the studio picked him on a pragmatic front and there’s nothing wrong with his performance here (playing a slightly less scrupulous and more sticky-fingered version of Peter Parker). Despite some more edgy fare on his résumé, he’s famous of that solid boyish screen presence and is fine as an earnest adventurer and parkouring, charming pickpocket. But even with all of that, he’s spectacularly, amazingly wrong for the main part, possibly the worst casting since someone said ‘Hey, that Tom Cruise would be ideal as Jack Reacher…’

The original game in the famous and groundbreaking PlayStation franchise had a burly Nathan Drake in his early thirties looking for ancient treasures… with plenty of flashbacks to his childhood and younger years, running away from an orphanage in search of his brother and the various global questings that followed. It wasn’t unreasonable to think Holland would likely play that younger version with an older actor playing the more veteran adventurer – think the River Phoenix sequence in Indiana Jones and the Last Crusade.  Indeed, Nathan Fillion had already made a pitch-perfect pitch for the older role in a glossy, if unauthorised short he made with Stephen Lang). Instead, bafflingly, Holland is the older Nate with Tiernan Jones as the adolescent.

But, in truth, there’s more heart in the fifteen minute Fillion effort – which effortlessly blends humour, action, attitude and nods to the game – than in the entire ninety minutes on show here that merely act as a show-reel for the visual-effects department or a travel brochure for those who never want to go. More concerned with tenuous and maguffin-led sideways glances at history rather than anything approaching even Hollywood’s version of acceptable science, even the most tolerant audiences are less likely to forgive the middle finger being shown to gravity and common sense. In the games it works better as the stories – however kinetic – actually make you care, the puzzles to solve require thought and the player takes some control via their consoles and buttons. Here the audience merely has to act as passive observer as pixels and post-production allow a sky-bound Tom Holland to jump UP and across plummeting cargo pallets and helicopters play ‘conkers’ with amazingly resilient ancient galleons as the quest for ancient treasures continues. There’s a thin line of longitude between fun silliness and abject nonsense and even giving it latitude, Uncharted sails across that marker as if storming the equator for fun.

Wahlberg, originally penciled in the earliest plan for the Drake role, instead essays Sully, the somewhat unscrupulous treasure-hunter who brings Nathan into the fold after a possibly ill-fated expedition with Nate’s brother Sam. Wahlberg and Holland make a good team with their banter, but it’s exactly the kind of generic chemistry we’ve seen before in countless movies and while they’re having fun, it feels like both men working on autopilot. Antonio Banderas makes a fun moustache-twirling bad guy but has less to do than you might think from his billing and The Chilling Adventures of Sabrina‘s Tati Gabrielle plays to form as a formidable and antognised antagonist. Sophia Ali as Chloe Frazer (voiced by Cludia Black in the game) makes an impression but in an uneven film, she’s sidelined for the climax. Actors such as Steven Waddington (as an-named Scottish henchman nicknamed ‘The Highlander’) have fun expanding their limited roles and largely marking time as punching and shooting fodder.

There’s no escaping – nor an intention – to distance itself from the obvious influences. At one point even Nate notes the Indiana Jones motif, which is an ironic reference as – shockingly – a large section of the audience being targeted may not have even been born when that debuted. The globe-trotting clues are recycled from National Treasure and even the discovery of the galleons brings to mind a similar sequence in The Goonies.

Uncharted  does the derring-do and does exactly what it depicts on the poster, except – ironically – in the case of that pesky title which couldn’t be more contradictory, its template set-pieces never taking us beyond limited expectations and staying firmly in the most familiar territory possible.

Uncharted is released on Digital HD from Amazon Video and iTunes on 26th April, 2022 and on DVD/blu-ray on 10th May, 2022  distributed by Sony Pictures Home Entertainment. 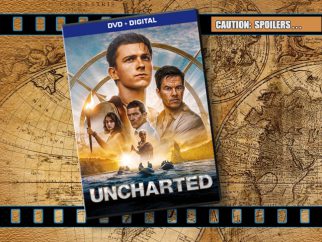