Picard and Guinan are read their rights while Agnes/Borg Queen looks to kick-start a new empire ahead of schedule in the latest episode...

Picard and Guinan are interrogated by an FBI agent who is convinced they are both aliens – but has personal as well as professional reasons for pursuing the truth be believes is ‘out there’. Meanwhile Seven and Raffi are on the trail of Agnes, but find her new form more formidable than they expected.

With help from Q, Kore confronts her father about the truth of her origin and Q himself begins to explain his role of a lifetime…

The second season of Picard is only ten episodes long, so it’s a little frustrating that while last week’s dreamscape episode – Monsters – was interesting and well-executed, it essentially sidetracked the main story… and fast on its heels comes another episode, Mercy, that while quite different from its predecessor, also seems to be about delaying or drip-feeding real progress.  It’s fun enough but it does little more than inch each storyline a little further forward, but with little sense of accomplishment or real urgency to the main story.

The Jurati/Borg thread is possibly the storyline with the most potential. Raffi and Seven’s encounter with the possessed Jurati (Borgati?  Queen Agnes?) is okay but probably reads better on paper, doing the job of a preliminary, survivable encounter between them to raise the stakes… but doesn’t quite work in its actual choreography. However long it took to drain car batteries, it’s a little unlikely /convenient that she’d still be literally around the corner from the establishment she ransacked the previous night and, all editing aside, it’s quite obviously a stuntwoman of different proportions that does the run across the cars in the parking lot before somehow raising Raffi very high off the floor. However it does raise the question as to how a solution is going to be found. Will there be a technobabble answer to separating the two entities and letting Jurati regain control or – as many have offered – are these the early days of the other Borg Queen that we saw arrive on the Stargazer back in the first episode to kickstart a predetermined journey? Pill was quite exceptional in her first scenes exploring the Borg Queen’s mind and it’s clear that she’s likely the MVP of the entire second season, but Jurati’s psyche is now so submerged that we’ve lost the opportunity to see her demonstrating that conflict in her acting. She may be in there, holding on by her ethereal fingernails, but the only narrative proof is that she’s not fully killed her former crew-mates as she scowls with a face that looks out with pitch-black eyes. (From the preview of next week’s entry, Pill may get her chance to do far more in the penultimate episode).

The other main thrust of the episode is something of an obvious homage to The X-Files. Wells, the FBI officer who took Picard and Guinan into custody at the end of the last episode, turns out not to be a nefarious agent but one who had an alien encounter when he was younger and has remained on the fringes of the agency (and in a basement) while he takes every opportunity to note and catalogue anything that might provide answers or closure. He has footage of Picard materialising near 10 Forward Street so he’s not convinced or distracted by the denials and shrugs of his ‘prisoners’.  As Wells, Jay Karnes essays a more crumpled version of Agent Mulder (sadly Karnes isn’t reprising his role of a temporal agent Ducane from Voyager, though it’s likely the connection helped with the casting) and provides a sympathetic character without real malice.

It’s an interesting enough diversion, played for both comedy and pathos but unless Wells/Karnes is going to feature in any significant way in the last couple of episodes of the run, it also feels like a brief distraction and a delaying tactic in an outing that’s already chock-full of ‘B’ stories competing for time and space.

There’s a scene between Guinan and Q that should crackle with confrontational electricity between powerful entities, but though it reveals a little more about the omnipotent one’s current problems (he’s dying, but is frustrated he can’t find meaning to his life) it  doesn’t quite seem to give Ito Aghayere and John De Lancie the grist they need to get beyond basic snark. They may be technically meeting for the first time, but they are established,  formidable characters and yet there’s never any sense of danger, just some posturing and instant dislike.

We do get to see Kore (Isla Briones) confront Doctor Soong (Brent Spiner) about the experimental aspect of her heritage (with a little help from Q who seems to have both unexplained specific, detailed knowledge of her origin and has managed to insert himself into a impossibly interactive old  computer file). The nuanced aspect of Soong’s conflicted character seems to have been reduced to an almost messianic need to perform experiments …which should be no surprise given the knowledge we have of his descendants’ activities but it seems a shame that we lose those shades of grey for more basic bad-guy snarling. (One wonders how his future bloodline works given he seems to have no wife or kids so far). Kore also seems to waltz out of captive compound far too easily if Soong is as deranged and desperate as he now appears.

Perhaps the main problem with the season – and, to be fair, one that’s hardly unique to this series  alone – is that despite a talented ensemble in front of and behind the camera, it doesn’t have quite enough story to evenly fill out its episode count and therefore it regularly shifts its focus and priorities in a way that lifts a viewer out of the arc. Characters are introduced and are inconsistent – doing things necessary to the moment rather than the arc, but then either standing about having contrived things to do or  – the reverse – become hugely important and then conveniently disappearing off camera or do something unlikely. Lynchpin Renee Picard is once again discussed but not seen (the last we saw of her was a look of horror as Picard was mown down by a car); Tallinn, despite forming an intimate connection with Picard last week is surplus to episodic requirements (except a last minute nod to using her transporter badge) and Rios, having brought Doctor Teresa Ramirez (Sol Rodriguez) and her son onboard the La Sirena (against all logic) is kept busy by playing host and smouldering with his guest. And apparently Doctor Soong is not only a geneticist, he can also get chummy with an army general and hire top-notch mercenaries willing to be injected by a woman in a cocktail dress at a moment’s notice?

The next two episodes have a lot to do. They must safeguard 2024, explain more about Q’s ‘health’, sort out Rios’ fledgling romance, address Jurati/Borg Queen’s joining, present a way for the crew to get home and that’s even without more examination of Picard’s inner turmoil or addressing how far  most of the crew have explicitly ignored the ‘butterfly’ effect by telling everyone they can find about their mission.

Again, it’s all fun enough… I’m enjoying this more than some of the other series on my radar and the cast are doing their best, supplying acting that’s better than the plotting – but the smart choices of early episodes seem to have given way to a more basic generic template and one hopes it’s now not going to be a loose-knit, mad rush to the end where the viewers have to fill in the blanks… 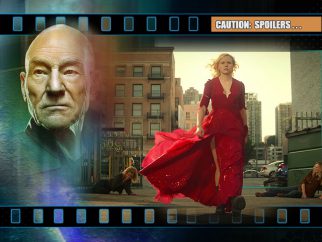