The latest 'Moon Knight' has a tomb with a view but it's the ending that people will be excavating..

Having survived the gun-toting perils of the desert, Layla and Marc/Steven head to find Ammit’s tomb before Harrow’s team can accomplish their goals. But descending into the darkness brings with it new dangers… some of them human and some that merely used to be human.

If they can avoid being sacrificed, falling to their deaths and navigating a deadly maze, can the erstwhile tomb raiders survive to uncover the truth about Harrow’s quest and also the secrets they’re keeping from each other?

If you coldly analyse the latest episode of Moon Knight it’s true that very little actually happens until the end. Previous installments have zig-zagged in manic and confusing fashion, but for all intents and purposes The Tomb is forty or so minutes of quite traditional connective derring-do:  Marc/Steven (Oscar Isaac) and Layla (May Calamawy) doing some tomb raiding through corridors and crypts and talking through some of their personal issues.  Given that concerns two personalities sharing the same body and the woman caught between them… there’s certainly issues to be resolved.

In a series full of surprises, it should come as no shock that Harrow eagerly confirms that Marc was involved with the events that led to the death of Layla’s father. Though Marc assures her that he wasn’t directly responsible, it does seem that he was there and that the incident is tied to Marc becoming Moon Knight, or so we are to currently believe. Layla’s not entirely sure whether to believe him – and neither are we – but it seems all the gods and their avatars have their hands dirty to some degree.

The exterior locations of Jordan are as marvelous and widescreen as you’d want and the show hugely benefits from being able to shoot in such locales to establish all its mythology – and there’s some solid research being done with regards to reverential nods to genuine Egyptian history. The interiors we see during this latest phase of the quest are well-lit and claustrophobic – just the way you like your creepy ancient tombs. They are generally well-shot, with the ‘scarier’ moments being of the old-school, almost Hammer-esque variety:  sinister shadows, necessary crumbling cliffs, cryptic crypts and dangerous walkways hiding undead terrors and rotting, reaching hands… but as for moving the actual plot forward, it’s more running around in dangerous circles – or, in this case, mazes.

It feels like this fourth episode is taking just a minute to catch its breath, not stopping the action but filling elements in rather than propelling them forward with earnest.

Of course, it’s the last couple of minutes that will prove the talking-point. With Steven/Marc shot several times at point-blank range by Harrow, he suddenly finds himself in a sterile asylum, surrounded by faces he seems to recognise and with a cheap ’80s adventure flick on the gogglebox echoing the wider themes of his recent trials and tribulations. Is he dead (the moon god Khonshu does seem a dab hand at reviving the dead). Has everything we’ve seen been some kind of psychotic break?  The latter idea initially makes some kind of sense… but given there’s still Egyptian iconography all around (and, wait…. a talking Hippo goddess?) the chances are that the simple answer is not going to be the correct one. Those with a fuller knowledge of the more modern Moon Knight comics (especially the 2016 run by Jeff Lemire and Greg Smallwood) will probably know where all this is going, but it’s a screeching handbrake turn that gives a water-cooler moment to an otherwise fun but tread-water episode. 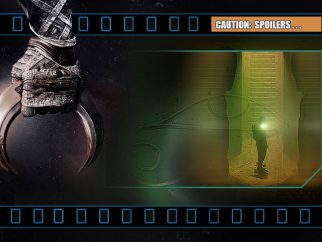