A long dark Knight - and a moody story that would have worked even better as a noirish mini-series...

People are dying in Gotham and though that’s nothing new in a dark metropolis with a growing problem of crime on its streets (and in its corridors of power) it appears that a man calling himself ‘Riddler’ is taking perverse pleasure in a campaign that takes in the city’s highest and most influential members. Neither Batman nor career police-detective James Gordon have any illusions about how widespread the corruption is, but do they know how high it goes? What is the connection that binds together Riddler’s targets and victims?

As Bruce Wayne struggles with revelations about his own family’s rise to power, his alter-ego is about to go up against the worst that Gotham has to offer. He’s making new and powerful enemies as well as encountering a select few who share his cause… but the question is how long can everyone keep their secrets as the bodies pile up and the city begins to crumble around them?

More akin to Seven than traditional ‘superheroes’ fare, Matt Reeves’ grim, down and dirty take on the Batman mythology will likely divide fans, but could arguably be the most honest, true-to-source vision of Gotham and its resident vigilante to date. Its post-modern, timeless unease is light-years away from the goofiness of the 60s show, a solid distance from Tim Burton’s more abstract kind of gothic and a different avenue to Christopher Nolan’s more visually sterile and clinical approach. Taking little bits from all those previous big-screen outings – but only as a courtesy – it simultaneously goes to the heart of the original source material and its tone and feels like a genuine attempt to take the most enduring parts of the Batman mythology and imbue them with the crime noir aspects that stalked the origins of the character at the very start. This Batman isn’t for kids. There’s an adult, abject brutality to proceedings from the start, the visceral kind where you can almost feel bones snapping and bruises being formed. There’s a heightened, twisted sense of urban decay and little of the modern ballet-like grace here, mainly bare-knuckle close-quarter fights that hurt. Though there are whispers from other eras, this is an interpretation that’s contemporary and nostalgic in one go. (There are some nice easter-eggs along the way that add rather than distract. In a scene where Bruce calls Alfred to warn him of Riddler’s approach, the old-fashioned phone next to a bust of Shakespeare quietly recalls the Adam West era and making Martha Wayne’s maiden name Arkham – elements that are a nice touch without ever being too pleased with themselves).

In the past the movies have been strategically about Bruce Wayne and examining the damaged psyche that drives a man to stalk the night seeking vengeance against crime itself – perhaps the hook for Keaton, Kilmer, Clooney, Bale, Affleck et al finding their footing. Though the sins of the Waynes and Bruce’s own mission are, indeed, central to the whole story at the heart of Matt Reeves’ portrait, this isn’t so much Bruce Wayne’s world… for better or for worse it’s Batman’s… and of the two personas, it’s the cowl that has most of the screen-time. Robert Pattinson is subsequently left with a different job than his predecessors. There’s no mention of the more mythical aspects of his training or elements of his origin other than the events surrounding his parents’ murder – instead he’s essaying a younger, angrier vigilante, less concerned with his family’s fortune than its innate reputation. He must trawl through Gotham’s underbelly in search of not just Riddler – the maniac terrorising the urban hive of scum and villainy – but those whose illicit deals fuel the city and who gave him cause.  This is a Batman who’s started to establish himself as a real presence, who can walk alongside cops, entering crime-scenes with James Gordon, but still with a sense of unease. Half the cops quietly respect his efforts and the others vocally resent the bizarre spectacle, bemusing the disregard for chains of evidence and wondering why a guy who dresses as a winged rat isn’t locked up himself. Pattinson handles the civilian identity in a fashion, a young man already tired and aware of a heavy legacy, but it’s clear that both he and the director don’t want to dwell on the everyday trials and tribulations of a bored billionaire in a high castle and instead on the mission at hand, one that takes him back to the streets that indirectly made him.

Pacing is everything and there’s no arguing that The Batman is (and feels like) a very long movie. Even in an age of regular 150 minute blockbusters, The Batman comes in at barely under three hours and such a runtime is still enough to create fatigue on the best of productions and audiences.  It’s ultimately  too long and too uneven but not to devastating effect. Before a more mandated action-element climax, there’s Aaron-Sorkin-on-lozenges levels of walk and talk, some of which is indulgent exposition and bravado and could have been clipped for time but there’s also enough style and passion surrounding it to make it all work if you’re patient enough. However, there’s probably a solid argument that with only minor adjustments the same story would have been far better serviced as a superior mini-series in format and would have immediately negated the feel of the drag on proceedings.

As noted, if not as memorable a Wayne, Pattinson is as arguably good as any of the Bats before him… but Reeves populates the production with an ensemble of equal talent.

Zoe Kravitz as Selina Kyle is perfectly cast – sultry and determined, all pussycat and pouting but with the steely edge of a wronged ingenue or duplicitous dame from a Chandler tome.  Sure, one wonders how she manages to wield a gun with finger-nails that unfeasibly long, but Kravitz has all the right moves  (the singular example of dancer-like-panache against the bare-knuckle brigade) and manages to hold her own in both the emotional and physically-demanding scenes.  Colin Farrell is utterly unrecognisable as Oswald Cobblepot, aka The Penguin, a rival, middle-level operator, sleazy and opportunistic, a physically-twisted  would-be crime-lord who looks like he could have been pulled out of hall of mirrors in a Godfather franchise. Jeffrey Wright makes an interesting if mostly reactive James Gordon, one of the few honest cops in the city.

Paul Dano’s Riddler is, as the character’s moniker suggests, a multi-level enigma or a simple nut-job, depending on your viewpoint.  On one hand he comes across as a totally unhinged, deranged social-inadequate using social media to promote his radical domestic-terrorist insurgent messaging (far too topical, unfortunately) but also the kind of  meticulous serial killer who would likely find a home on a true-life crime cable entry or Criminal Minds if the show had had a full HBO remit and was directed by David Fincher. He’s Gotham’s take on the Zodiac killer with an added sovereign nation delusion. After the likes of Frank Gorshin and Jim Carrey, it feels like the darkest, creepiest of turns, removing every inch of the comical and replacing it with the sadistic. It’s a different, sleazier character… but it’s not impossible to imagine Dano’s Riddler sitting with Heath Ledger’s Joker and sharing their meds in the same wing of Arkham Asylum.

Andy Serkis, the latest Alfred is less Gough or Caine and more like  an older, weathered version of Jack Bannon’s interpretation seen in epix‘s standalone Pennyworth. He’s not used as much as you’d expect and certainly not enough,  but Reeves nails the father-figure/adopted son dynamic that makes Alfred far more than a stereotypical butler.

Yes, the bombastic drums and symphonic strings of the background music (courtesy of Michael Giacchino) frequently come on too heavy and overwrought at times and the over-all soundtrack is far too loud throughout, sometimes drowning the atmosphere as much as the consistent downpour. Yet there’s genuine spectacle here too, but not the kind of glinting chrome carnage and mayhem delivered by Michael Bay. The Batman is arguably too dark, literally most of its story taking place in the physical and metaphorical shadows, but Reeves and cinematographer Greig Fraser use light in that darkness to good effect. The Batmobile is stylish and efficient. The fiery chase along the Gotham freeway and the Dark Knight silhouetted at an angle against the flames as a suddenly humbled Penguin cowers in an upturned car is memorable, as is Batman striding through the wreckage of a flooded stadium with a flare in hand, guiding people to safety like a beacon. That’s essentially the core of the movie – how you choose to beat back the relentless shadows.

Not a wholesale reinvention as much as a realignment, then, this is a dark and dirty story that feels immediately less commercial but a more honest interpretation of the Batman myth. Visually it deserves to be appreciated on the big-screen… running-time-wise, its three-hours are more likely suited to this week’s release on HBO Max.

My late friend, the great John Bierly was the kindest soul and the biggest Batman fan and despite the nihilism that permeates much of The Batman at first glance, I suspect John would have loved its over-all arc of finding and taking control of one’s true path and that, ultimately, success is not measured by achievement alone but sheer intent and the ability to change.

For better and for worse, all of us will always need a Batman in one form or another – and this may be the one we deserve right now… 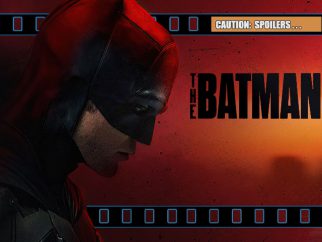