The Last of Us: Inflection, ‘Infection’ and the roots of all evil…

There's great tension and bad vibrations as Tess, Joel and Ellie head out of the city in search of the Fireflies...

Joel and Tess are wary of Ellie and the threat they think she may still pose, but they have agreed continue their journey out of the city and to keep their promise to deliver her to the Fireflies resistance group and receive the supplies they need in exchange. However, all their usual smuggling routes appear compromised and so a new way has to be found to get them even a few blocks further away from the Quarantine Zone (QZ) and FEDRA.

While they might be able to escape their immediate human pursuers, there are other more immediate dangers to face. As Joel explains the practical trials and tribulations of traversing the landscape, a resistant Ellie learns that even a slight mis-step could alert a whole swarm of the infected and bring them down en masse upon the weary travellers.

However, even when they reach their designated rendezvous with the Fireflies, it seems their problems are just beginning…

The Last of Us‘ second episode (‘Infected‘) is a solid enough entry and won’t disappoint those who loved the opener (making it the second highest debut in the last decade after House of the Dragon and a notable ratings-winner on any awareness level), but also the kind that further establishes the credentials of its acting and its VFX department while probably not converting those who are worried it might be travelling generic territory. In short, the plot isn’t moved substantially forward but what does happen is presented in a consistently stylish and impressive way, bolstering the existing foundations and keeping you hooked if you’re already onboard.

As with the opener, we start with something of a flashback to the emergence of the virus. This was never directly shown in the game and there’s definitely a feeling that the Eastern origins (here it’s Jakarta, Indonesia) was informed by the experiences and investigations into how COVID might have begun. Here, in rather explicit detail, one of the first corpses is examined and there’s a different kind of quiet, horror as a viral expert quickly understands the biological implications of the cross-species transference of the Cordyceps condition. With no joy whatsoever, the scientist Ibu Ratna (Christine Hakim), informs the local commander that this is the worse-case scenario: the previously unthinkable has become real and the only realistic reaction is the most extreme extreme measures. There is no antidote, no vaccine that can handily deal with such a scenario and the only responsible thing to do is to totally carpet-bomb the city, annihilating the entire population and stopping even the smallest chance of it escaping the area… and with that she heads home for what might be her last hours with her family, likely knowing her own fate is sealed. It’s the sheer cold, starkness of the confirmation and acceptance of the inevitable, the biological equivalent of getting a four-minute nuclear warning, that sends a chill down the spine.

Then we’re back to the show’s ‘present’ with Joel, Tess and Ellie as they continue to navigate their way out of the city. The progress isn’t physically far, but with their normal smuggling routes compromised by troops or debris it’s a case of creeping through unfamiliar corridors and buildings – though they’ll be familiar to players of the original game, with key designs and interactions recreated. It’s also worth noting the strong, up-close choreography that increases the claustrophobic tension.

It’s worth noting that though Pascal’s Joel and Ramsey’s Ellie are the key characters of the story, it’s Anna Torv and ‘Tess’ that matches them beat for beat and powers them forward so far…the great thing about the interactions between Torv and Pascal is that you also don’t need to have witnessed their characters’ complete history to understand it – so much in conveyed by inference, stance, glance and cadence…

As much of interest is the actual dialogue, the two adults deciding how much they can truly trust their ‘cargo’ given the revelation that she’s been bitten. Joel is all for turning back, feeling they’ve been lied to and compromised and that Ellie could still be a danger. Tess, the pragmatist, thinks there’s nothing to lose by continuing and seeing the mission through… noting that the Fireflies are willing to pay them for their mission regardless of whether Ellie actually represents a real-deal cure or not.  Ramsay’s Ellie continues to be petulant and sarcastic, but in her own way she’s also a pragmatist, knowing that her survival now depends on these strangers who could easily just leave her or kill her if she twitches the wrong way. (So perhaps pretending to twitch isn’t her best move).  There’s also more descriptions of the way that the fungus interacts with body a human body and the environment – making every move a risk for our survivors.

I have to admit that I have slightly mixed feelings about one of the biggest change to the mythology we see here, but mostly because, as of this episode, it’s not as clearly defined as it could be. In the game, the virus was spread through both bites and spores in the air. Though the gnashing of teeth is still a viable and painful transfer method, the idea of breathing in those spores was deemed narratively impractical (perhaps, after recent experiences, Pascal didn’t want to spend too many scenes with his face hidden behind yet another protective but limiting mask?) and a less exciting visual than concentrating on the idea of something more sinister… a more overtly interconnected organism with a tendency for tendrils. Essentially it’s like an infiltrating, insidious root system where one part of the organism reacts to sensing something elsewhere in its network. In that sense it makes it more interesting and dangerous than generic zombies though there are moments when it feels more science-fiction that potential science-fact (though if you want a real scare look up the real Cordyceps, be prepared to never sleep again, so…) . During an attack by the ‘runners’ (making these ‘zombies’ far more of a legitimate fungal flash-mob threat), tendrils can deliver something of a judas kiss to a victim and that’s an obviously scary visual, especially when it claims one of the central characters. (I’m still wondering how and when that initial infection specifically happened, likely during the first encounter with the Clickers?). But it might make viewers wonder just how this method would be so quick to take hold as to cause such an uncontrollable pandemic, one that relies on speed as much as the nastiness of the result. However, all in all, it works as a purely scary device and if some of the concept initially felt like The Walking Dead, this evokes more of an Invasion of the Body Snatchers vibe.

It’s worth noting that though Pascal’s Joel and Ramsey’s Ellie are the key characters of the story, it’s Anna Torv and ‘Tess’ that matches them beat for beat and powers them forward so far.  In the game, the character was originally voiced by the often-underestimated Annie Wersching (24, Bosch) but Torv (an equally versatile actor best known for Fringe and Mindhunter) is given even more room to flesh out the smuggler. She gives us a Tess who is clearly the smartest character among the fugitives. Pascal, as an actor, has an undeniable imposing presence in every scene, but it’s Torv’s Tess, Joel’s partner in several senses of the word, who is the dominant persona, aware of Joel’s hardened instincts and willing to let him be the capable muscle… but she’s won’t let his pain and reactive impulses destroy them if there’s a better, less-adrenaline powered way. She thinks ahead and evaluates and she’s also the one who realises they don’t have to like or trust Ellie to understand how important she is and what it’s worth to keep her alive at all costs. The great thing about the interactions between Torv and Pascal is that you also don’t need to have witnessed their characters’ complete history to understand it – so much in conveyed by inference, stance, glance and cadence. Torv gives Tess – assessing her fate and wanting to make her last moments count, desperately flicking at that lighter – a real emotional wallop…

Most of this episode is self-contained within a small area and the efforts to navigate no more than a few blocks. The cat-and-mouse around the Bostonian Museum recreates the similar sequence in the game. Two of the fungal-headed ‘clickers’, reacting not to sight but sound, make a dangerous threat and manage to generate more immediate tension and sense of peril than The Walking Dead did in a long while. These monsters are threats that can move at speed to kill you but can stagger by within inches without detecting you… unless you’re unlucky enough to rattle debris (which, of course, is inevitable). The game-version makes you act quickly in your own ‘self-defense’, but watching others take on the threat and not being able to affect it for them is a different sense of drama.

Infection is a solid second entry (rating-wise already setting new HBO records and increasing its ratings from the already impressive premiere) and further proof this is a journey where it’s worth following in the characters’ footsteps… but, carefully. 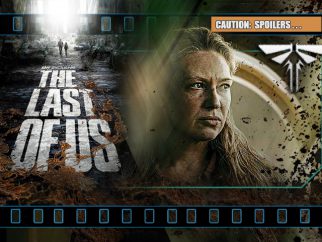