There's legal dramas a'plenty in primetime, but at least 'Accused' asks us to cast a more nuanced verdict...

It would be tempting to say a drama concerned in any way with a potential mass-shooting seems unusually tragic in a week when there have been two (now at least THREE) multi-victim incidents grabbing the real-life headlines – but sadly, the truth is that you could place such a drama in any week of the year and there’s a solid chance you’d be able to draw such parallels. And, indeed, Howard Gordon – the showrunner on Fox‘s new anthology drama Accused – is no stranger to having his prescient finger on the pulse of the American psyche with the likes of 24 (in the immediate wake of 9/11) and Homeland (a drama about the psychological damages of war).

Based on, or at least inspired by the British drama series of the same name – originally created by industry legend  Jimmy McGovern and running for two seasons in 2010-2011 – Accused is a show that takes a separate case each week and guides the audience through the person on trial for a crime of which they may or may not be guilty, but also looking at the nuance of what ‘guilt’ actually means. It takes the monochromatic judgement and introduces a slew of greys that speak to the ‘whys’ and much as the ‘whos’ of the matter.  The original series boasted the likes of Christopher Eccleston, Peter Capaldi, Mackenzie Crook, Juliet Stevenson, Marc Warren, Olivia Colman, Robert Sheehan, Sheridan Smith and Sean Bean and the American version follows suit with impressive names such as Keith Carradine, Abigail Breslin, Margo Martindale, Malcolm-Jamal Warner, Rhea Perlman, Rachel Bilson and Wendell Pierce.

Accused is a somewhat unusual primetime show, one that takes a sentence and makes it a paragraph – taking a legal concept and filling it out further, pivoting its audience into far more interesting and nuanced territory. To say the story is concerned with a school-shooting is a bit of a misdirect – it’s more accurate to say it’s largely about everything but that. It’s about the innate and unnerving suspicion that someone you know and care about is about to do something horrific and feeling unsure, conflicted and helpless in what to do about it.

‘Accused‘ is a somewhat unusual primetime show – one that takes a sentence and makes it a paragraph – taking a legal concept and filling it out further, pivoting its audience into far more interesting and nuanced territory…

The first entry – Scott’s Story – opens with Michael Chiklis – as well-respected surgeon Scott Corbett – being rushed into court, clearly the target of anger from a crowd and even ‘shot’ with a paint pellet as he makes his way through the courthouse. Whatever he’s accused of, it’s clear the case is getting a lot of attention.  Looking back over the weeks prior to the trial, we see Scott becoming more and more concerned about his youngest son, Hunter (an excellent and edgy Oakes Fegley). Scott and his wife Lynn (Jill Hennessy) are called to the school by the principal. Despite evidence that Hunter has been the target of some bullying within the school, the faculty are concerned over social-media posts in which Hunter has made comments about spraying acid into the face of his chief bully and ruining her life. It’s a serious escalation – but while Scott sees the warning signs, his wife is more protective of her son and thinks the solution is to merely get him out of the school and into another. Scott realises that this incident is only one in a long line of moments over the years where Hunter seems disconnected to consequences and that the various therapists they’ve seen have had little impact on the loner. Feeling guilty about the way his job has often come first and anxious to reconnect with his son, Scott ends up finding Hunter’s journal full of scrawlings about violent retribution against his oppressors and it makes him terrified the Hunter may be about to escalate things even further.

When a neighbourhood dog goes missing after Hunter declares it should be killed for its incessant barking and he refuses to deny he’s responsible, Scott becomes convinced that the problem can’t be ignored. He seeks advice from respected colleagues and even talks to the police, but as no crime has been committed, there’s little that can be done in any practical way – especially if Hunter isn’t in the mood to cooperate. Scott senses that a breaking point is coming and fears the consequences. He remembers the trips they took as a family years before, hiking around a gorge that has, in modern times, become infamous for those killed on its increasingly dangerous terrain and decides to take Hunter there… because one way or another he has to stop him.

Back in the courtroom we begin to wonder if Scott killed his own son and that is what the trial is for, but as the story flashes back again to a moment on the hiking trail when it’s clear Scott may be about to do the unthinkable and push his son off the cliff-face. Then we see Hunter explaining that he knew his father would find the journal and that Hunter is just desperate for attention and his father’s love, explaining away the various suspicious activities (such as needing money) as nothing more than a plan to head off with friend on a trip to Iceland to clear his head. Scott, feeling guilty of what he nearly did, doesn’t kill his son and breathes a huge sigh of relief when it turns out that the neighbour’s missing dog has been found unharmed after running away.

And a few days later, after manipulating his father on a primal level, Hunter and his online friend use Scott’s offer of money to help fund the trip to buy an arsenal of weapons and kill a swathe of classmates, just as Scott feared. It becomes clear that Scott is on trial for being complicit in the event and not doing everything he could to stop it.

Scott’s Story is a powerful entry, all the more so because it balances both the easy access to weapons with the problems of mental health and asks some very difficult questions about the insufficent guard-rails to both – offering no answers but astute observations about perceptions and preconceptions. It is neither political in its approach nor casually sensational, but pulls at the headlines that often want as linear judgement as a trial itself.  The audience’s ‘loyalties’ are pulled one way and another, horrified in turn by both the possibility of what Hunter may do (because all the warning signs are there) and also what Scott may do to stop him (because, hey, what if he’s completely wrong?) – all based in some way on nothing more than feelings based on an incomplete story until it fully plays out. When it does reach its conclusion, we  – like Scott – are left wondering if we would have acted differently not knowing the truth until later. Given that some recent news-stories have reflected on the role of parents of accused shooters, Scott’s Story is a sign that we often have no clue about their culpability or lack of it until much later and even then it’s often a personal take on it all. That Gordon’s tale (ably directed by Michael Cuesta) spins out of a real-life story in Japan where a man pre-emptively killed his son to possibly prevent a massacre just makes it all the more chilling.

Chiklis has made a career out of wrong-footing audiences – able to play both the funny and the horrific, everything from The Commish through to Vic Mackey in The Shield (and, of course, being the best Thing in the Fantastic Four!)  As ever, he’s great here – totally convincing as a father who feels he’s failed his son and is desperately torn between trying to save that relationship and protecting others. Jill Hennessy lifts what could have been a one-note defensive character into a parent who realises how much she’s missed the family fracture and  – as noted – Oakes Fegley as Hunter is mercurial enough that we’re not quite sure until the end what is going to happen to him. On closer examination the court-case itself might be a little thin (if Scott had approached the police before with his concerns, surely that would have come into play, despite his money ‘financing’ the event) but the rest of the proceedings does feel like an accurate way we decide things from afar.

Accused has had impressive overnight ratings in the US and deserves to be applauded for not being the kind of safer network fare that often populates primetime. Yes, it’s a drama, not a documentary or a prescriptive solution for what ails modern society and it’s likely that some entries will be more effective than others, but so far, it’s nice to see a show challenging its audience to look deeper rather than mollifying them with the predictable. 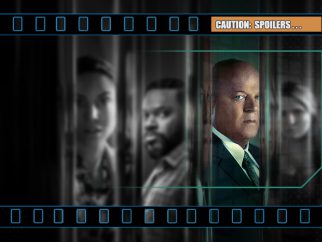 The Last of Us: Inflection, ‘Infection’ and the roots of all evil…