A critically-injured Layton finds he's the victim of mind-games in an alt-track Snowpiercer...

After collapsing during his tending and preparation of Pike’s corpse, Layton is eventually found and rushed for medical attention. However his situation is critical, even life-threatening and he appears to have slipped into a coma.

Layton hovers between life and death and experiences a lucid dream aboard a train that contains quite different carriages, populated by faces he recognises, though their personas seem askew. The Librarian (this alt-version of Till) says that he is running out of time and to make it back to the other version of Snowpiercer, he’ll have to get to the Tail-section.  Given the guards and other interested parties, will Layton be able to navigate his way through the carriages and agendas?

And in the real world, which unexpected sources can be counted on to help Layton and the train?

Snowpiercer consistently packs a lot of story and twists and turns into its story-arcs, episodes and seasons, so perhaps we have to give it some latitude that, sooner or later, there’d be an episode that was more about style than substance. It’s not that Ouroboros isn’t an enjoyable episode in its own right – this is a show with a more than impressive hit-rate – merely that we’re at the almost obligatory ‘dream’ episode that is creative, looks big and is ambitious in its own right but actually delivers only minor nudges to anything important – the kind that, bar a few scenes, you could skip and it wouldn’t do much to scupper your understanding of the wider run and bigger picture.

I think I’m right in saying this is the only episode in recent memory that doesn’t start with a monologue (it might have been a nice surreal touch to have it finish with one instead?). Snowpiercer has always had a heightened-reality – even its basic concept is somewhat fantastical. It did some ethereal work in Bound by One Track, where Jennifer Connelly reprised a spectral Melanie, an imagined sounding board for several characters. Ouroboros is far more invested in the fantasy aspect and around two thirds of the episode take place in Layton’s mind as he hovers between life and death and tries to navigate a train that is at once familiar and askew. He and a varied band of collaborators work their way through deals and ‘locations’. He needs to reach the Tail of the train and discover who’s there, but he has to get there first. His ‘cover-story’ in the dream is as a dancer (perhaps a nod to Diggs’ work on Hamilton) but though it only feels like a matter of time before a bonafide song-and-dance number breaks out, it never happens… which is arguably both a relief and disappointment. (One suspects that though there have been torch-songs sung in the Night Car and soundtracks played in key scenes, an abstract/surreal routine would have been impressive but still feel too far outside the normal box-car).

The lucid-dream world comes off as a cross between an Ernest Hemingway novel and Alice in Wonderland, the train transformed into a sweaty Banana Republic like environment complete with military checkpoints and Sean Bean donning a cream suit and Panama hat for the occasion. Mickey Sumner’s Til is the sage guide, pointing him in the right direction like Wonderland’s caterpillar and Annalise Basso is a decent rebel a la Red Queen. The destination turns out to be a grown-up Liana (Kandyse McClure), though if that’s any foreshadowing remains to be seen.

In the ‘real’ world, there are some interesting conversations. Lena Hall’s Audrey – for reasons that don’t seem clear – agrees to help to try and reach Layton through his subconscious and also offers some insight into Till’s personal state of independence and Zarah (Sheila Vand) and Josie (Katie McGuinness) find their respective feelings for Layton bond them rather than drive them apart.

Visually it’s quite a treat – the different hues distinguishing the realities, the soft focus in the dream and the harder, bluer edges of the ‘real’ Snowpiercer. A lot of set decoration far more detailed than it might need to be (look for brief images of the Eden tree that Layton rushes past and an assortment of extras, photos and posters that could well be production in-jokes as much as nuanced mind-games. (There’s a sense of not knowing how much is Layton’s mind playing tricks and what might be genuinely ethereal – there’s the suggestion the visions of the Eden tree could simply be a subliminal reaction to an old photo, but there’s also the question of how Layton knows the content of Zarah’s note to their daughter?) Again, it’s a solid episode in its own right on many levels, worthy of the show and ensemble of characters that have probably earned a stop-gap, but, if we’re honest, it’s still largely filler in the narrative department.

The final seconds do offer a swerve: it would appear to suggest that – as we speculated – Melanie isn’t dead, though there’s still a lot of wiggle-room in how the possibility will play out. Wilford is a master manipulator, but even he appears to be genuinely convinced that Melanie is the source of a mysterious signal that he picked up some time ago (and now, with an idea of where Snowpiercer is globally, is putting the pieces together). It could, of course, merely be a delaying tactic to literally derail Layton’s plans to get the train to New Eden as soon as possible, but having Mel back would certainly play into the complications that are already in play. 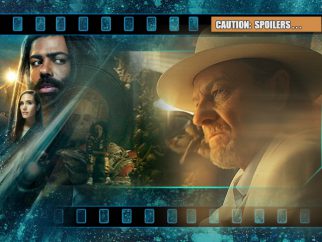