We FINALLY make 'first contact' in Discovery's penultimate episode - but is it too little, too late?

It appears that first contact with Unknown Species 10-C is imminent but as the Discovery approaches the creatures it has come to meet, can it even get their attention?  With time ticking away, can the team overcome the most basic problems of language to save their home planets and the wider galaxy?

Meanwhile Tarka is ready for a far less wait-and-see approach and is determined to strike at the first opportunity. Will diplomacy win out?

If the latest season of Discovery had been written as a better-paced movie instead of an entire television run, then the latest (penultimate) perfectly serviceable episode would be the five-ten minutes before the climactic battle commences. If the overall story was a singular episode of Trek, concerned with the perils of a first contact situation (and the real irony here is it that for all the weight, high-stakes and angst involved, the central concept – reduced to the basics – could well have been strip-mined to fit an extended episode) this would be the last scene before the final commercial break. It’s the stand around and talk about the problem stage while various characters offer suggestions, insight and some disagreement about how to continue – extended to a full episode. And in that regard, the truth is that it’s interesting as a concept but not very exciting in presentation or execution.

Yes, the idea of a completely alien race communicating through chemicals rather than a vocal language is deliciously high-concept and far from the traditional interactions we’ve come to expect, but it feels more suitable as a thesis rather than a tv series. There are obvious touchstones here – including 1977’s Close Encounters of the Third Kind and 1997’s Contact.  But it’s the 2016 film Arrival (which specifically dealt with the difficulties of language and finding common ground with extra-terrestrials) that feels like the likely inspiration for this episode in particular. However, while many liked its attention to detail, many found that two-hour movie to be aching slow… so consider, then, that this season of Discovery – with all its diversions and stretching out of its ‘mystery’ – collectively runs to around ten hours and you start to see the multiplied frustrations in having got to even this point. Many movies squander their pitch by lacking a satisfying third act. Unfortunately, Discovery never really found its second.

The other real problem here is letting potentially complex characters fall into a standard archetype role, lacking promised nuance, as we approach the end.

When first introduced there was some potential in Tarka (Shawn Doyle), a character that absolutely no viewer trusted but one with a nice line in snark and enough shrouded back-story to make him interesting and complex. But though episodes such as The Galactic Barrier attempted to cast some sympathy for the man adrift and the choices he was making, almost every other beat has successfully painted him as not just arrogant but homicidally reckless… to the point that he shrugs off any statistical date that points to an Armageddon-like scenario, in favour of his history-defying confidence that his equations are completely correct. Time after time people give him the benefit of the doubt (Book, we’re looking at you) only to be deceived. At some point, you don’t feel sympathy for the inevitable betrayals that happen again and again. Here then, Tarka just become a rather generic bad-guy with a self-justifying, boo-hoo excuse and one that seems unlikely to make it out of the finale alive when he surely faces his inevitable, karmic comeuppance.

One could argue that having a more aggressive back-up plan in case diplomacy doesn’t work is a valid, pragmatic move in such a situation. It’s understandable that Earth representative General Ndoye (Phumzile Sitole) is inclined to ally herself with Book and Tarka as a go-to if things fail, but she really doesn’t require much arm-twisting to abandon the diplomatic route the minute Burnham, Saru, President Rillak (Chelah Horsdal) and President T’rina (Tara Rosling) depart for a cosmic chat in the unknown. The betrayal is needed to provide the impetus into yet one more episode, but it feels contrived as much as inevitable given the set-up.

Tig Notaro returns as Commander Janet Reno and it’s always a pleasure to watch her rise to any material she’s given – both comedic and heartfelt. Here she explains to Book about the dangerous power of grief – telling him it can lead to bad decisions involving actions and supporting others too blindly, even if they have good intentions. She tells him that shortly after her wife died she was attempting to treat a horribly burned officer and kept him alive for over eleven painful hours, finally realising that the only reason she was holding on – in vain – to the mortally-injured colleague was because his eyes reminded her of her wife. It’s a good scene, which she sells completely, but it rather puts the rest of the episode’s dialogue to shame. Later she manages to send a quick message to Discovery via her com-link but it’s amazing how we see her typing for a few seconds and the message the ship gets is Reno’s voice talking far more than she should have been able to. (Other members of the bridge crew get a few lines of dialogue here and there – largely as a further act of charity…)

Put aside more power-walks and there’s an individual episode with some actual power here – for once Trek truly is going where it hasn’t gone before and these have to be the most alien aliens we’ve (partially) seen – but it’s taken so long to get to this point that the worthy discussions don’t help speed the plough. If this season of Discovery really wants to take a pseudo-high-brow, intellectual approach, that’s fine – there’s room for all sorts of sf and intelligent concepts should always be welcome. But it does make one wonder how next week’s finale will wrap things up. A slow-burn, further pondering of life, the universe and everything may not be the climactic ending needed (and which the powers-that-be will surely push for). But perform a screeching U-turn into that more traditional gigantic, explosive VFX ender, then it’ll feel like surrendering the ‘big message’ for some lightweight fireworks. To some extent, Doctor Who attempted something similar (albeit far more nihilistic) and more abstract with a chilling first-contact situation in Torchwood: Children of Earth but had the unexpected conviction to deliver just five episodes and its brutal ending in the most surgical way… and it’s unlikely the end of this season of Discovery will offer anything more profound than another reset for next season.

Again, the most annoying thing here is that a smaller cast, a shorter running time and a more decisive narrative could have produced a strong-enough story with a similar theme that was less drawn out. There’s always a handful of scenes and bits of dialogue in each week’s entry that demonstrate those strengths, just not enough to support the baggage that’s been hauled alongside them or the constant distractions. 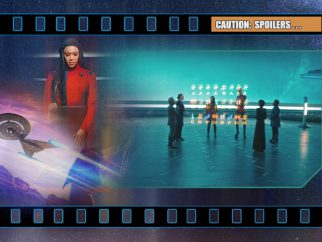