Our heroes will need all the Reich moves and skills to survive their new twisted reality...

The Stargazer has exploded, but apparently the consequences are rather less final than anticpated. Picard has awoken back at his chateau, but it’s not quite the same as he remembers it and with ‘Q’ arriving, it becomes clear that something is askew… though the almost-omnipotent visitor is less in the mood for quirky ‘games’ than usual.

Seven, Agnes, Raffi, Rios and Elnor also find themselves in new territory and positions, quickly realising that the universe has changed around them – and in most cases, not for the better. Earth is now the centre of a ‘Confederation’ that has subjugated and brutalised the galaxy with this reality’s Seven/Annika and Picard as senior figures in the regime.  As the execution of a captured Borg Queen draws near, Picard and his friends must play their parts while working out a way to escape and put the timeline right.

But with time ticking away, will the Borg Queen offer answers, or will any form of resistance prove futile?

The first episode of Picard‘s second season, arriving last week, was generally considered a barnstorming return to form, an opening salvo of epic proportions. Not so much a course correction (there was plenty to like in the show’s first season even if it didn’t come together in a completely satisfying way) but definitely a statement of a boldly-going intent to celebrate the mythology of the show and its central character.

The second episode might not have quite the cosmic cinematic scope of the opener – less outer space vistas, more inner conflicts – but there’s still an obvious sense of ambition and interesting world-building that has been missing in Trek for a while. Doug Aarniokoski continues his directing duties giving life to charming chateaus and sterile presidential palaces alike and the result is an outing that feels like an ambitious TNG episode given room to breathe – traditional beats and moments but bolstered by modern VFX and decent beloved character dialogue.

Given the amount of time Trek has visited its Mirror Universe, the very idea of evil variations of main characters often feels over-used. However, it’s precisely established here that despite the power-grab politics and back-stabbing nature on show this isn’t the MU but the normal reality that’s being altered because of a specific event-change in the past. It’s a subtle distinction probably lost on their victims, but given that this all feels like a pivot-point rather than the main problem (ie:  reason to head off elsewhere/when to set everything right) then it’s a premise that’s fun to watch play out over the episode. Continuing the sense of legacy, there’s some reverential wordplay in the mix, citing phrases like Yesterday’s Enterprise and In a Mirror Darkly that echo key franchise entries and savvy viewers will catch a distant but massive projection of Brent Spiner’s Adam Soong with the actor’s voice echoing the Confederation’s mantra.

Pacing – such a problem for Discovery – is less problematic here. True, much of the marketing for the show has pivoted around the time-travel aspect of the story-arc, but by the time we’re at the end of the second episode, there’s been no Quantum Leaping or Time Tunneling of any kind, though there’s been  a decent set-up for the need. It’s a fair point that while time-travel is never easy in Trek, it’s also questionably not that difficult either – almost every aspect of Trek has found a way for its characters to do so to the extent that you’d expect time to be rewritten on a daily basis. But here, at least, there’s dialogue that walks the line well… pointing out that just because you’ve worked out how it can be / has been done in principle, it’s far harder to actually execute as needed.

Obviously one of the delights is the repartee between Sir Patrick Stewart’s Picard and John de Lancie’s Q. It’s always been a sparring-match as the almost-omnipotent being toys with reality and Picard’s life in particular, but De Lancie adds a sinister element to proceedings. Rather than chaos-causing fun, there’s some wide-eyed venom in his looks and spittle in his dialogue and Picard notes that there’s something different  and ‘off’ to their interaction. Given that Q uses the title of the episode (Penance) to describe why events are happening, it speaks to an animosity that doesn’t make a lot of sense as yet… and is likely to be explained as we move forward (or, as it were, backwards).

Having reunited then separated the main cast at the end of the opener, Penance spends some time locating where they ended up and detailing how they each react to their new status.  Yes, it’s highly convenient that Jeri Ryan’s Annika (aka Seven of Nine) is suddenly the President of the Confederation, but if this alt-world has anything directly to do with Q then it smacks of his warped sense of humour. This new version of reality is well rendered on a solid tv budget. No, making the immoral, fascistic regime the ‘Confederation’ rather than the ‘Federation’ is not exactly subtle, nor are the black, white and red flags that often populate such alt-history power-grabs, but it doesn’t take long to establish their other supremacist credentials. Jon Jon Briones (father of Isa Briones who plays Soji) makes a convincingly brusque Chief Magistrate / Enforcer (and husband of the President) who could easily have just been a one-line henchman in other hands. Once the new status-quo is established, it doesn’t take a huge amount of time to unite the main cast but there’s some fun deception to make it work.

Alison Pill makes her Agnes Jurati just the right side of annoying, able to use both her scientific knowledge and scattershot talking to work in the story’s favour. Evan Evagora as Elnor demonstrates some solid (and well shot) close-quarter fighting skills and the slice-and-dicing amongst the punching is more bloody than Trek usually gets. Annie Wersching (24, Bosch) makes an effective Borg Queen – not the insectoid version we saw last week but the more traditional version (previously brought to cybernetic life by Alice Krige and Susanna Thompson). Given that the Queen is transported around in a container that occasionally conjures up visions of Futurama, it would have been easy to lose any sense of menace. However there’s still a cold detachment at work, even as the Queen looks ready to be executed and Wersching, almost unrecognisable under the prosthetics gives the kind of icy stare that says that she isn’t about to accept her fate or if inevitable, at least not acknowledge her subjugation by an inferior species. It’s an irony that is not lost on several characters who have heard the ‘resistance is futile‘ assimilation mantra in the past and probably take some quiet joy in the reversal of fortune.

A well-paced, fun entry keeps things moving at just the right momentum. Our heroes (and the Borg Queen) seem to be in trouble again at the end of the episode, but one suspects they’ll be on their way again in plenty of time (literally) soon after the third episode airs next week… 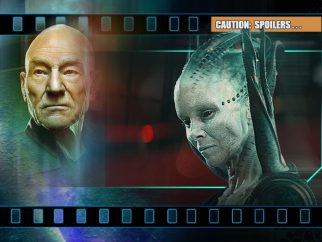 Harry Bosch continues his ‘Legacy’ on IMDb-TV in May…