What Lies Beneath: Has Snowpiercer’s revolution come full circle?

The trains are slow but the events move quickly as Wilford and Layton each try to strike 'The First Blow'...

When a provisional assault on Snowpiercer fails and costs Layton a number of hos own carriages, a new plan has to be made, but that will rely on them on locating their target. A cat and mouse game between Snowpiercer and Big Alice continues around an icy railroad hub, each of the trains running ‘dark’ to avoid detection by the other. Wilford wants to confront and destroy his enemy, yet may have to settle for a cut-and-run approach.

However, when events on Snowpiercer signal an opening, Layton puts into place an urgent gambit that will make Wilford choose between his train and his paramour, Audrey.  But even if Layton can turn the tables, what will he be prepared to do to make sure their journey isn’t over before its begun?

“I’ve come to think this train demands a lie.”

There can be few regular viewers settling in to watch this week’s Snowpiercer who could have predicted the speed at which events unfolded. It was entirely reasonable to expect that the cat-and- mouse game between the two trains (one controlled by Layton, the other by Wilford) would have been kept on (literal) track for a large amount of the season, building bit by bit to some epic confrontation that would round out proceedings and set a different course for the already-confirmed fourth run. So to have not only the trains but their ‘captains’ go head to head was a genuine surprise, doubly-so for the quick turnover in Snowpiercer’s power-play and Wilford beaten, sliced and now firmly (for the moment) behind bars.

It was almost too quick. While it’s highly unlikely that Wilford is a spent force – Sean Bean is far too good in the deliciously serpentine role for this to be the endgame and the show is far from done – there is something of an obvious and deliberate shift. What has, recently, been a chase scenario has pivoted to something quite different and a situation that echoes some of the earlier threads of the series: a claustrophobic clash of agendas, priorities and attitudes that can only come from cramming very diverse people into very small spaces.  If the Wilford/Layton conflict was a revolution, what comes next is that old maxim noting you don’t only have to win the war, you have to win the peace thereafter.

The exterior world-building continues to impress with excellent VFX shots of the train yard, while the interiors remain as confined yet complex as the characters. Tellingly, Snowpiercer started off not just as a tale of social politics but with the central lie that Wilford was on the train and controlled everything. Now, with the sadistic Wilford a very real presence onboard yet currently humbled, Layton’s tenure is as much framed by as grand a lie on the unsuspecting passengers. With the tenuous help of Asha (Archie Panjabi), plucked from years of solitary existence in the frigid mountains, Layton spins a tale to reinforce his conviction that Africa is one of the key places shaking off the Earth’s freezing conditions and their final destination. His version of the wider world, which Asha is playing along with for the moment, is that she originally came from that warmer zone and can speak first-hand of the safer home for humanity. It allows him to win a crucial vote of confidence… but at what cost? Layton doesn’t like the social-engineering of the original construct but seems to be entirely justifying engineering a story to manipulate the social structure of those he leads, rather than truly trusting them with a democracy he’s promised. Basing their fate on a gut instinct is dangerous enough but having a cabal of co-conspirators all of whom might be compromised in the days to come speaks to even greater risks, especially so with those others who will likely feel justifiably betrayed when (and not if) the deceit is ultimately revealed.

There were gruesome scenes along the way, including some ice-cold torture from Kevin (the sadistic ‘Smithers’ of this show) inflicting some dreadful atrocities in the name of his master, Wilford. (Farewell, then, to ‘Strong Boy’). It’s the kind of actions that have you quietly wishing Kevin an equal nasty and karmic demise… and we don’t have to wait too long for that either as LJ Folger skewers him in the aftermath of Layton retaking the train. (This time let’s hope his demise is permanent!). Annalise Basso as Folger is one of those cat-nip characters that you love to hate in a different way. There’s something darkly impressive about the way she can unapologetically instantly pivot her allegiances in the name of self-preservation – not doing things because they are right or wrong, but simply what will grant her the best chance of survival at the right moment. She’s… reliably unreliable.

The quieter scenes between Pike (Steven Ogg) and Ruth (Alison Wright) are also impressive. They were from opposite ends of the train and the social structure but have found a kinship and mutual respect built on what needs to be done and their ‘leadership’ roles. Neither is innocent and both have a certain amount of blood on their hands – and may do so again – but the respect and loyalty that others have shown them and the risks they have taken for those others really marks them as people to root for in the long-term.

There’s a lot to play for going forward and it’s impressive when a show can wrong-foot you… so you have no idea what’s coming next. It’ll be good to see Roche (Mike O’Malley) back in circulation and there are promises that we haven’t seen the last of Melanie (Jennifer Connelly) though whether that’s a bait-and-switch and just in flashbacks will be the crux of the matter… 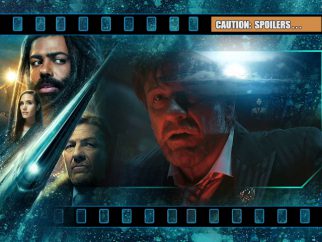 And this year’s Oscar nominations go to…