Boba Fett, the Mandalorian, Fennec Shand, Black Krrsantan and a ragtag group of allies have been planning their strategy against the Pyke Gang, the family intending to extend their powerbase on Tatooine… but the bombing of Garsa Fwip’s club means they have no time left. Fett has acquired assurances of non-intervention from various other ‘interested parties’ but it becomes clear that not everyone will stick to such agreements. With the results of Cad Bane’s gunslinging in ‘Freetown’, it also appears that badly-needed back-up may never arrive.

Cornered and with few options, it appears that the odds are never going to be in their favour and that their chances of winning or even surviving are crumbling faster than the buildings around them, but sometimes salvation comes at the last moment… and in very big and very small packages.

Unlike some, I’ve never had a huge amount of love for the character of Bobba Fett – but nor have I any loathing or hate. For me he was an unremarkable supporting character in a massive movie, a kind of elevated, stylised henchman, ultimately fortunate enough to have a distinctive name and a perhaps unintended collectible-variant action-figure. But the decades-long passion of a certain section of the fan-base combined with a largely blank-slate when it came to any real character inside the helmet made Fett the kind of ideal, fresh-start opportunity that Lucasfilm were looking for when they needed another Disney+ series.  There was a lot that could be done when you only have an armoured template, rather than a detailed blueprint, so there were many ways to go. And since the announcement of that show, I haven’t wished it anything but success – I didn’t hate-watch to see it fail, quite the opposite… the potential to be fun was obvious and the talent and money invested in that pursuit showed clear intent to create something good or better.

Despite wanting to applaud the finale, there’s just too much to ignore that hobbles the result, defying even luke(sic)-warm expectations, coming in with something that often looks lovely but feels strangely amateur in all but the high budget for VFX shots.

The introduction of Grogu in the first third of the hour, jetting in on R2D2 airlines after obviously foregoing his training, may settle the question over the foundling’s career-decision and how much more of the Mandalorian series would take place within this show, but that early appearance totally ruins the building of supposed tension within the episode. In what would have been a far more effective shock entrance as a game-changer in the middle of the climactic firefight (with perhaps the merest of subtle hints ahead of time that an off-screen Peli Motto needed to speak to Mando urgently about something?) we instead get that dramatic moment squandered for a comedy beat and it’s obvious from then on what’s going to happen and who will come in to save the day.

Temeura Morrison, a solid actor, was given conflicting windmills to tilt at throughout the run…. was his Fett a ruthless bounty-hunter who wanted to take over Jabba the Hutt’s criminal empire for himself and kill anyone who stood in his way, a lone warrior learning the ways of the wilderness or a Robin Hood-esque hero who didn’t like killing and just wanted to be liked and provide for those nice villagers? The series – given all these variations to choose from, could never decide and didn’t have enough time to fully develop any one of them without diluting the others. The result was a neutered character and one who literally stumbled more than he soared and grumbled more than he grappled. The multi-talented Ming-Na Wen was given the occasional martial-arts, close-quarter set-pieces to deliver (which she did admirably) but the rest of the time the script reduced her into a henchperson and ‘right-hand-woman’ who was frequently better at pragmatic decisions than Fett himself. With the audience waiting for her potential to be realised and offered breadcrumbs as a banquet, there simply wasn’t enough development to showcase her or prove worthy of her involvement. They deserved better than the scripts offered.

But the pacing of Disney+ shows – often dazzling in other departments – has always been an Achilles heel, vainly trying to tell stories in a way that encourages loyalty and interest without too much padding along the way. Those Fett flashbacks to the Tusken Raiders and their arc within the story were interesting and stylish but uneven and ultimately wasted after being built-up so much and then discarded, people we’d invested in being casually massacred/fridged off-screen. Then two (of the seven) episodes of The Book of Boba Fett (arguably the strongest of the run) were devoid of all the regulars and actually just The Mandalorian in all but packaging… showing a fundamental problem and fault-line within the main ‘body’ of the show.

Pacing in an actual singular episode has rarely been worse than this finale… the result being what feels like a generic and rather uninspired first-draft of a needed climax.  Things happen not because of the natural flow of story, but because there are required set-pieces scripted to occur however we get there – the result is not an organic world-building episode, it’s just a conveyer belt where things happen or stop happening for the sake of a visual. When something is happening to Character A in a crowded scene, little happens to anyone else. They spit out some dialogue or snark and then turn to watch something happen to Character B… ad infinitum, providing covering dialogue as much as covering fire. Positioning and choreography is just… well, more than disappointing – it’s shockingly bad, especially from a pull-out-everything scenario that an endgame deserves. Groups simply line-up to be shot and when they break cover they actually run together in a straight line IN the line of fire (there’s literally four spread-out but quick-cut clips that look like the same sequence of our heroes running away down a straight street from the machines that couldn’t possibly miss, but do!). At one point, one of the two good-guy support shooters on the rooftop says ‘Distract them!‘ as they line-up on the bad-guys below. Huh? The good guys talking are right next to each other! It’s impossible for one to distract… only to do nothing or actively draw their fire to both of them!  And I’ve never seen an episode so full of obvious and clunky ‘reaction’ shots.  The Super Destroyer Droids look daunting and formidable but are equally inconsistent. On a visual level they’re great to watch, but one is destroyed with relative ease and the other takes almost everything thrown at it before finally staggering to defeat. As the townsfolk and assorted players gaze out of frame with furrowed brows for pick-up shots, you can almost hear Rodriguez shouting “Look scared! Now, look concerned! Now, cheer!”

Look, I genuinely like Rodriguez as a film director, but his Boba Fett episodes have felt extraordinarily lackluster. Rather than create something extraordinary and Desperado-like, he’s simply seizing the opportunity to blatantly homage his favourite vintage movie-moments rather than deliver great action in and of itself.  The supposedly frantic ‘chase’ in The Streets of Mos Espa was a half-speed let-down full of silly ‘gags’, the divisive ‘Mod’ bikes *shudder* all coming after a over-reverential nod to Ray Harryhaussen’s legendary stop-motion techniques. This week? It’s an unapologetic recreation of Willis O’Brien’s work on King Kong, with a Rancor taking the great ape’s place. It might have worked as a singular moment, but the homage shamelessly goes on and on and on with the Rancor lovingly rendered in CGI, seemingly changing size from shot to shot and until you’re almost shouting ‘Yes, okay, we get it! Now… put the creature out of its misery… or us!‘ Yes, fine, Grogu calming the creature with a ‘The sun is going down, big guy‘ Force-induced sleep and then curling up alongside is kinda cute, but…

Other connective tissue aspects are equally fragile and frivilous.  Actors such as Jennifer Beals and Danny Trejo have appeared in what seemed more than cameos but were then forgotten or discarded. (Anyone thinking that Beal getting all blowed up in last week’s epiosde was a clever ruse to forestall her being revealed as a big bad… nope. R2-D2’s taxi-service for Grogu avoids more costly-motion-capture Luke (and what would have to have been a pivotal involvement in events that had to be avoided) but still feels as awkward as it is convenient. Finding out in the closing credits that Marshal Cobb Vanth (Timothy Olyphant) isn’t really dead, just mostly dead and being nursed back to health in the Bacta-Tank is also a bit of a hand-wave rather than a swerve. (Having him apparently killed seemed like a waste of his character, but this feels like a ‘having-your-cake-and-eat-it’ cheat in story-telling so he can be removed from the story but used again). The gunfight with fan-favourite bad guy with Cad Bane was well-rendered, but his apparent demise would have been far more effective if he had been around for longer, rather than being simply introduced at the tail-end of the previous episode. And, at the end of this episode smiling villagers scurry are around thanking our ‘heroes’ for their victory, apparently not even noticing that most of their homes have been destroyed in the process. Only the Jawas, with fresh debris to scavenge would have any room for applause.

Again, all the above may sound like a manifesto against the show… but there’s lots of ‘moments’ to like – but as a whole, it just falls so far below the basic expectations when you consider how great it should have been.   I really wanted to like the show, even love it and there were certainly moments that linger in a good way, but despite the prestige and the legacy touches, it has just seemed like a well-financed tribute act – accessing all the props and employing all the talent and yet having nothing (or too much) to say and settling for running around, kicking some Tatooine tyres.  Lucasfilm, Jon Favreau and company clearly have cutting-edge technology and an innate love for the galaxy far, far away… but it feels like the show got the greenlight before anyone knew what they wanted to do with it and – in the end – there’s nothing here that’s truly nailed down except the easter-eggs… a dark tale told too lightly and all executed with the casual targeting prowess of a storm-trooper.

Going forward, I’d welcome Fett, Shand and company back as guest-stars in other of the myriad Star Wars shows on the horizon, but unless there’s a major rethink and a clear sense of style and purpose, there’s no way they’d support another season of their own title. 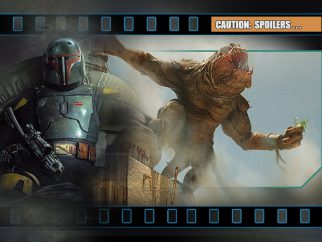 What Lies Beneath: Has Snowpiercer’s revolution come full circle?