Keeping up with these Abbots is still a thrilling experience in this delayed but worthwhile sequel to the 2018 thriller...

The Abbots have thwarted the specific creatures that were attacking their homestead, but at a heavy cost. As Emily, Regan and Marcus – along with Emily’s newborn son – decide they have to leave what is left of their home, the question is, what awaits them beyond the valley? Grabbing essential supplies they begin a slow and careful walk from their sanctuary. But they haven’t got far before they encounter more of the creatures and though they are saved by neighbour Emmett, he initially doesn’t want the responsibility and danger the family bring. He’s already lost his own family and doesn’t want to go through that again.

But when the radio picks up a song that Emmett says is repeated every time each day, it’s ironically the hearing-impaired Regan that picks up its true message and importance.

Even as she determines to follow her own course, the dangers around Emmett’s makeshift sanctuary are escalating and will mean Emily and Marcus will have to make their own hard choices about survival…

*spoilers – for this and the original film*

The original A Quiet Place felt like a hushed and held breath of fresh air on its release in 2018. With nary a word spoken for its first act, it went straight to the heart of the ‘monster’ movie, sold on the tension and terrain of predator and prey rather than look-at-me CGI. It was essentially a masterclass in ‘feel don’t tell’, giving us an animalesque adversary that was detailed in its threat but whose origins weren’t explained (we’re dropped into ‘Day 89’ after whatever originally happened) and with the characters unable to verbally communicate or provide the kind of exposition that more clunky scripts are wont to do, just in case the audience ‘don’t get it’ (The audience, almost always, does get it, they just aren’t always impressed by it).

Singular awkward footsteps, an errant nail and a broken twig were all suddenly a risk factor to be navigated in a world where the slightest sound was the great leveller . Front-and-centre sign-language demanded that the audience learn a new syntax to go with the old-school scares. And it worked, in dividends.

A sequel seemed not only inevitable but desired, but the question was whether it could live up to the original. There’s some truth to the fact that this follow-up, delayed for well over a year (since ‘Part Two‘ became one of the earliest casualties of the 2020 covid reshuffle) feels slightly more in the vein of traditional Hollywood formula, splitting up its post-nuclear family to face independent post-apocalypse threats. But if it feels a little less ‘original’ by default, – echoes of the Jurassic Park kitchen sequence, the Simmonds/Murphy arc feeling like a nod to The Last of Us (but executed just as well) and nods to post-apocalyptic tropes of communities either devolved into savagery or too complacent to live –  it still manages to execute its ongoing central conceit and premise with substantial flair and style. It’s still family vs fiends without all the backchat… and that’s a solid-sell in and of itself.

‘If it feels a little less ‘original’ by default, it still manages to execute its ongoing central conceit and premise with substantial flair and style –  family vs fiends, without all the backchat… and that’s a solid-sell in and of itself.

After the ‘Day One’ flashback at the beginning which encapsulates the ‘Well, that escalated quickly…‘ maxim, things are far less frenetic but no less tense. After the story splinters the characters from each other, it cuts between those characters and the specific threats in their paths, sometimes frustratingly, but usually to great effect, often giving us simultaneous pay-offs.  Krasinski, returning as director after ***further spoiler alert*** his on-screen death in the first film, is already demonstrating the potential for a solid career behind the camera and knows just how much to crank the tensions before releasing the set-pieces. If the film plays to a formula, then at least its a potent one.

Millicent Simmonds as the Abbots’ daughter Regan made a huge impression in the first film. Though Emily Blunt and John Krasinski were the star-power couple on which the film was sold (and who provided a lot of the familial heart on which the story worked) the young hearing-impaired actor was key, holding her own against bigger names in the acting department and providing the narrative key to the film’s climax.  This time, with Krasinski’s on-screen duties confined to a opening flashback, Emily Blunt’s maternal instincts as Evelyn hold as strong as her shotgun, but it’s Simmonds who undeniably bravura performance that steals the show, playing the latest addition to Hollywood’s roll-call of tough young women taking on monsters (Ellen Ripley, Sarah Connor etc). Yet Simmonds and the script never tip the character into overt superhero territory. Yes, thanks to the original film we now know the alien apex-predators’ main weakness, but the sequel essentially says “Fine, but what are you going to do with that knowledge?” There’s good decisions and bad decisions made in that regard, but Regan is simply a normal person in an abnormal situation, one who has been through heartbreak and hell and has realised she genuinely has uncovered a chance to do something important – from which she won’t be persuaded or turned away. (Off-screen the eighteen year old is just as dynamic – she has been snapped up by one of Hollywood’s leading talent agencies WME and used 2020 to champion a range of clear covid-masks that helped those with hearing disabilities cope with the pandemic communication more easily).

Cillian Murphy’s role is largely to look intense and slowly warm up to protecting his neighbours, especially Regan, but he does so with the needed intensity. Noah Jupe is fine as Marcus, Regan’s sibling, but is largely confined to the guardian and bad-decisions role. Though seen in publicity imagery, Djimon Hounsou ‘s role is so minimal his character doesn’t even have a name, much less a real role, which seems like a waste of a strong actor and more of a pacing decision to extend the film by a few minutes

Minor quibbles? There are times when the lack of sound work amazingly well – again, strong choices from Krazinski – but a few when you genuinely wish the voices were just a little louder so you don’t think you may have missed some key information. (See it in a multiplex with Dolby Stereo or a similar cutting-edge sound system to get the best effect). The extended revelation that the monsters can’t travel across water offers up the same questions as Mel Gibson’s Signs –  in that Earth is a pretty poor choice for an otherwise superbly dominant predator.  (That being said, it’s nice to have a monster that’s not given a ‘personality’, just a killing method. It’s not smart, it’s just lethal and built for it). There’s a strange easing of tensions when Regan and Emmett get to the island (why are they relaxing and not running full pelt to the radio station to start their broadcast plan?). You know this isn’t going to end well.  It’s worth saying that the ending, while resolving immediate crises, feels a little abrupt and certainly suggests a ‘Part Three’ could happen.

But those are minor quibbles and for the most part, the film does exactly what it needs to do and does it well.  A Quiet Place: Part Two is pretty much the first salvo in a return to cinema (the film is now out on the big screen but will also have a streaming window starting this time next month) and becomes the first film to pass the $100 million mark this year and likely to pass the $200 million in a matter of days. A third film set in the ‘Quiet Place‘ universe (though not, technically, a Part Three) has already received a greenlight for a 2023 release and is set to be directed by Jeff Nichols (Take Shelter, Midnight Special).

A film about an apocalypse being the possible salvation of a pandemic-hit industry and a movie about a Quiet world that makes great use of sound?

Now that genuinely feels like something to shout about…

A Quiet Place: Part Two is now in US cinemas and will be available on demand next month… 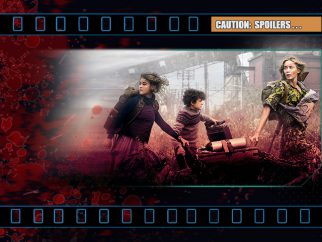