Based on a solid novel, Netflix's 'The Silence' adaptation suffers not just from the shadow of 'A Quiet Place' but a basic lack of originality...

When a caving group finally manage to enter a vast series of underground caverns, they think they’ve made a significant breakthrough, but instead they’ve initiated an historical breakout as a previously unknown breed of winged creatures pour out of the new opening and out in to the wider world.  And they are hungry. The creatures are blind from their evolution underground but efficiently hunt through using sonar and sound and it’s not long before they are cutting a swathe and a swarm through the American heartland.

Deaf student Ally Andrews (Kiernan Shipka), who lost her hearing three years before in a car accident – is preparing to deal with the usual trials and tribulations of a new college and a burgeoning romance with a fellow student. She is not preparing for the end of the world. But as the full scale of what is happening becomes apparent, she and her father ( Stanley Tucci), mother (Miranda Otto), brother (Kyle Breitkopf) and family friend John Corbett realise they have to get out of the noisy city as soon as they can… but can they do it quietly and where will they go?

Around this time last year while my wife and I watched A Quiet Place  – which we both thoroughly enjoyed – she recalled she’d read a book  with a similar premise several years before. It was about a world where humanity had to keep silent to avoid a sudden invasion of predators from a recently opened cave system – but it wasn’t until the opening minutes of new Netflix offering The Silence, that she was able to confirm that the tome she remembered was Tim Lebbon’s 2015 novel and that this was, indeed, an adaptation of such. As she’d also liked the book, expectations were raised and we settled in.

Though the acclaimed The Silence book predates A Quiet Place by several years, the tv movie (filmed in late 2017) trails after the imposing Oscar-winner and loses that previously-owned original real estate and finds itself inevitably judged in its shadow. If timing was The Silence‘s only problem, it could be forgiven as merely unfortunate, but frankly there’s a litany of deafening stumbling blocks that make it far inferior not just to the source material but other examples of the genre.

In an episodic or mini-series setting, the provided plot could have moved more organically and developed its themes and characters at a novel pace, but here in a streamlined ninety minute movie the story feels more like a decent if predictable pilot episode, quickly checking off a list of cliff-notes and un-coordinated touchstones… and all ones that seem achingly familiar at that:  An inevitable car crash derailing an escape, a race for antibiotics, a family member prepared to sacrifice themselves… a threat from a very human kind of monster and rumours of survivors heading to the ‘icy North’ where the monsters can’t follow. Tick, tick, tick, etc etc. The main cast – Miranda Otto,Stanley Tucci and Kiernana Shipka – are all fine actors but do little more than go through exactly the motions and actions you’d expect from every single post-apocalyptic plot-point you’ve seen play out before. The supporting characters fare far worse…Ally’s boyfriend hovers on Instant Messenger; a clearly unhinged preacher with a serious speech-impediment simmers with all the makeshift malevolence a cardboard cutout can muster; his shuffling flock hang about like Walking Dead meets Deliverance day-players reading to invade and an anonymous homesteader gets even shorter shrift… (The moment Tongueless McPriestyFace holds up a sign asking if Ally is fertile is meant to be chilling, but its almost laugh-inducing in its sheer ‘boo-hiss’ remit…).

Nor does the world-building really work, the tv movie is never sure if the apocalypse is a disaster or an inconvenience – wanting both a slide into the total devolution of society and gone-crazy tribal enclaves (in less than a week) yet announcing that CNN is still broadcasting from a ‘secret bunker’ and wi-fi is still operational.  (Yay – Genuine ‘Breaking News’ for a change!)  The ‘real’ world at the beginning of the film has the depth of a Lifetime movie about school peer-pressure and seems there only to introduce Ally’s generic maybe-boyfriend, who is shoved off stage thereafter (and confined to brief words of long-distant support by emojis).

Full kudos to the cast for learning convincingly formal sign-language, though the film seems to waver on how far it leans into that – minutes of scenes pass where you’ll have to guess what’s been discussed (don’t bother searching for subtitles) and then several scenes occur when signing might have been better than the actual spoken dialogue. Genuinely-deaf actress Millicent Simmonds was great in A Quiet Place. Here, Kiernan Shipka has the hand gestures down-pat but not so much in her instinctual body movements and reactions in the few times the story actually pays any attention to her disability. Echoing the complaints of the deaf community who criticised the production for not casting a deaf actress, for whom there are limited opportunities, it’s unfortunately true that I’m not sure there’s a single scene where I’m truly convinced she’s anything other than an actress pretending to be deaf ,which somewhat rubbishes director John R. Leonetti (the far superior Annabelle) and his ill-judged comment that Shipka has an ‘…almost innate sense of what it’s like being a deaf person‘.

The other niggle, though perhaps a minor or even petty one, is Netflix launching The Silence within a few days of bringing back The Chilling Adventures of Sabrina. There’s a fair to middling chance that though utterly different in tone, you could easily find yourself watching a Sabrina episode and then immediately turning to this and noting that Kiernan Shipka is the star of both. Which is totally fine, but then within a few minutes, Ally’s mum walks in and… wait an unholy second, that’s Sabrina’s Aunt Zelda (Miranda Otto)! Again, it’s a minor niggle, just a coincidence and one that in itself is easily overcome, but it’s a moment that lifts you out of the experience when it should be planting roots, which is a shame.

The CGI creatures are more lovingly rendered than the script, their individual physical appearance making more sense than the sheer numbers required to inflict the global damage they do and produce some moments of tension, at least on a Jurassic Park / raptor level with touches of Alien incubation. But the film often relies on their pixel-sharp teeth and claws rather than cranking up the real tension of their mere presence.

All in all, Tim Lebbon’s original book The Silence sings while Netflix‘s adaptation merely parrots creaky lyrics like a tribute act… and the on screen result falls somewhere below the superbly judged, tight and minimalist A Quiet Place and the more famous-face-and-trope embracing seeding in Birdbox. A superior book becomes a middling tv movie which embraces a few good ideas and squanders the rest. It might have been interesting to explore some aspects in a longer episodic form but here we have nothing but willpower and the suspension of all disbelief to hold them together… and sadly, The Silence doesn’t become a sound investment… 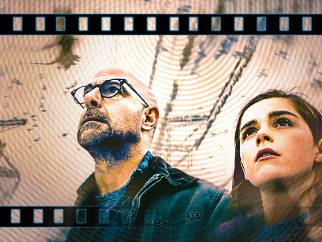 Star Wars IX trailer gets a ‘Rise’ out of fans…