'A Quiet Place' may be something to shout about, but in this new horror outing, no-one can hear you scream...

A group of people slowly make their way around the ramshackle remains of a small city store – its staff, inhabitants and a majority of its stock now long gone. It’s soon clear that this isn’t some opportunistic theft, but a family on the wrong side of something recent but truly apocalyptic – that this is a vital mission to find food and supplies. But even for such an activity, they are being unusually quiet – the family using sign language and visual cues to work together. They are avoiding making any unnecessary sound – but why?

It all becomes clear when a toy rocket, taken from one of the shelves, starts to emit what would be a normal toy sound – but in this new world, it’s a siren call for creatures who apparently navigate with some devilish sonar.  It does not end well.

Nearly a year later and the survivors have set up at a farmhouse. The family have set up all sorts of safeguards, but their attackers are still around and can hone in on any shrill sound. The father spends a lot of time in the basement, quietly scouring the radio-waves for any signs of lie beyond the occasional beacons that rural communities light across the fields. But he’s yet to find any real way of defending themselves that isn’t down to luck, lightness of footfall and holding one’s breath.  But his wife is now nearly full-term with a baby due and they know full well that such infants are far from quiet. Their existing children want to help, but are they ready to put their survival skills to the test?

In a world where silence has become the key to survival, things are about to get very dangerous for the family and one little slip could doom them all…

While it’s tempting to think that the script for A Quiet Place might be paper-thin – the lines of actual dialogue for the entire film would barely fill a page – it’s probably more accurate to think it is lengthier than the average outing, given that it would likely be full of descriptions and directions – an operating manual from which the cast and crew of the film take their cues and handle everything with nerve-shredding aplomb. The film may not break any boundaries but it navigates them all with a style and wit from which others could learn a thing or two.

Krasinski, here playing the father of the group, is primarily known as a comedy actor (The Office and in a career pivot, soon to be the lead in the television adaptation of Tom Clancy’s Jack Ryan) has been quietly building directorial resume with smaller projects over the last few years, but this is his first for a major studio (Paramount). With acting/directing double-duty on A Quiet Place it’s clear he’s been studying hard and it’s entirely to his credit that he’s learned the best on-screen scares are often the ones generated by tension and anticipation rather than climax and pay-off. It’s a sign that a film knows what it’s doing when it can generate such tension out of everyday objects and lack of action (rather than lack of momentum). Though there are fast-paced moments when there are Alien-esque terrors, they’re best when they emulate more the finale cat-and-mouse of an early Ripley in the dying moments of the original than the kick-ass heroine and franchise-friendly action-fest that those sequels became. Instead, A Quiet Place uses its CGI sparingly, the acoustic beasties allowed to hover just beyond the camera’s frame for much of the story, reaching in with gnashing teeth and scalely talons to punctuate proceedings.  Here, you won’t be screaming ‘It’s behind you!‘ so much as cringing over a dangerously sharp, solitary nail on a cellar stairway as it sits there like an upturned sword of Damocles waiting for an inevitable foot. Not since Tom Cruise’s singular bead of sweat threatened to derail the first Mission Impossible has a scene been able to slow things down to ramp things up.

Emily Blunt, Krasinski’s real-life wife, is equally good, showing a well-balanced sense of desperation and maternal instinct to keep her children safe. You don’t doubt the pain, both physical and mental as she tries to deal with past loss and future problems.

It would have been easy to cast some flavour of the month teen as Regan, the couple’s deaf daughter, so it’s good to know that a genuinely deaf actress, Millicent Simmonds, is allowed to essay the role. She’s a confident performer who balances her character’s everyday frustrations with her survivor’s guilt and such is the strength of her physical performance that you’ll forget that you don’t hear a single word from her throughout. Noah Jupe (The Night Manager, Wonder) also manages to capture the awkward nature of adolescence, wanting to act as a grown-up but not having all the experience to do so.

The lack of sound may be a ‘gimmick’ in some respects, or at least the ‘hook’ but as recent film Hush (and the Buffy episode of the same title) taught us, in the right hands, it increases possibilities and dramatic obstacles (and even occasional humour) rather than takes them away. The characters have had to create workarounds for their everyday life: sign-language, visual alarms and cues and a buddy-system to keep them safe, but there’s no way to totally isolate themselves from the creaks and clatter of everything.  It’s amazing how much is affected when you have to think about mere vibrations. There are moments when it can be frustrating to the audience, but for the most part, the deceit holds up.  There’s no real explanation for this monstrous incursion which may be for the best, though it might have been helpful to get a little more of an idea of the wider scope of things beyond the valley in which most of the story is set.

As with last year’s surprise hit Get Out, this is a film that’s not revolutionary in its content, but one that knows that there’s serious effective horror to be mined from a sense of helplessness, taking the B-movie staples and yet making the audience care for them as they try to navigate a suddenly savage environment. There’s certain similar ground here to the somewhat ill-fated Mel Gibson / M. Night Shyamalan project Signs. Eschewing the ‘let’s blow up recognisbale buildings’ formula, both switch their focus from the urban wastelands to rural communities and feature mid-western families under-siege from something otherworldly. Equally there’s an argument that their inherent weakness is that the internal logic wavers a little bit in favour of suspense. In Signs – spoiler-alert – the invaders are allergic to water (why did they pick a planet that’s 2/3 of that weakness?). Here the creatures navigate by sound but over a year into their encroachment, it doesn’t seem anyone’s seriously used that against them, which would seem an obvious go-to.

One of the new wave of steadfast and sure suspense movies from talent previously known for their acting, it looks as if the genre is getting some of the new blood it deserves and the old school frights it needs.

After its notable cinematic debut, it hits DVD / Blu-ray this week… 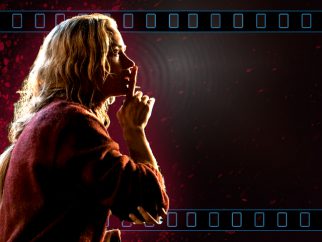