As a massive corporate merger threatens to upend the investigation connecting Alasator Pharmaceuticals and the River Murders, the ViCAP team realise that they can no longer quietly gather evidence in the hope of eventually having an air-tight case. There seems no other option than informing Ruth Martin of their off-the-books activities and to face Joe Hudlin head-on to see if they can shake his self-assured demeanour.

As the dialogue continues in the offices above, Julia Lawson feels she has no choice but to try salvaging the files that are about to be permanently shipped out of reach, but as her efforts are discovered, plans are put in motion to silence her – has she already risked too much?

And as the stakes are raised, Alastor’s owner Nils Hagen decides its time to apply specific pressure…

Years ago, director Sydney Pollack told me that if his feature adaptation of The Firm had stuck to the plot of John Grisham’s original novel, there would have been a solid hour of running-time devoted to photocopying.  Much of this week’s episode of Clarice feels like it has a similar remit – it  involves files, faxing and fuck-yous to middle-management and the rest is largely office politics, power-plays and corporate intimidation. That’s not to say some genuine tension isn’t created in the cat-and-mouse efforts for each side to navigate around the other, merely that it’s mostly paper-cut sharp, walk-and-talk dialogue on display rather than the down-and-dirty aspects of some episodes.

Notably, Kal Penn’s Tripathi is back from his extended family-duties, an absence with hand-wavery character reasons (and apparently based on real-life contractual limitations) that always felt awkward but largely dismissed in a couple of lines of dialogue. With Penn apparently confirming he’ll be in all these last three episodes, there’s the return of some nice asides and banter between him and Lucca De Oliveira’s Esquivel.

Once again Clarice  – who seems to have learned very few lessons this season – wanted to fly solo into the monster’s den but, thankfully, Krendler puts his foot down and demands she has back-up from Tripathi and Esquivel – which is good because by the end of the day she needs it. There was a concern that the brave Julia would go too far to aid our ViCAP team and get herself killed for her snooping around boxes of incriminating documentation. As noted before, that would have simply substituted one carefully-avoided drama trope for another, but thankfully – though it seems things are about to devolve into gun-toting chaos – the team and their informer get out of the stand-off and potentially deadly ‘security issue’ with no  actual bullets flying. In fact, it’s Julia’s smarts and quick-thinking that might well save the day and the case entire.

The stench of toxic masculinity hangs over all the otherwise sterile offices we move through. Raoul Bhaneja’s serpentine Hudlin has already proven a thug with an expensive suit and an expansive ego, but that eager sense of self-importance and intimidating bravado perhaps points to him being a dangerous instigator rather than the true ‘evil’ behind the corporate throne he orbits. Alastor’s actual owner, the elderly Nils Hagen (Peter McRobbie) is the kind of man who knows his Greek mythology and its implications and admires blood-red abstract art as it hangs on his wall like a dripping metaphor… and yet has a tellingly dismissive attitude to women en masse, even the River Murder victims. He might lack the sheer physical power to personally act on his whims and priorities, but you get the feeling he has no problem with getting people to act on his behalf. Tyson Conway, Hagen’s son has seemed to be of a better personality and morality – though I’m not sure if that’s a mis-direct – but by the end of this episode he too is distancing himself from a potential connection with Clarice (an element that’s been somewhat undefined so far, anyway) and confirming his familial allegiances. Elsewhere David Hewlett essays Herman, the kind of  FBI division boss who can fake everything including sincerity and who promises Ardelia all sorts of comfortable caveats that both know is a smokescreen and buffer-zone against her incoming discriminatory legal defense.

Towards the end there’s more indications that Clarice’s memories of her loving father  may be open to question. The implications here are not entirely specific, though gathering apace but one can infer enough for it to feel genuinely creepy. Frankly, there feels more than enough existing story-arcs to work on than play too heavily into yet another strand and with the possibilities of a second season pick-up suddenly in doubt, it might not be wise for the series to introduce any more plate-spinning it won’t be able to complete… 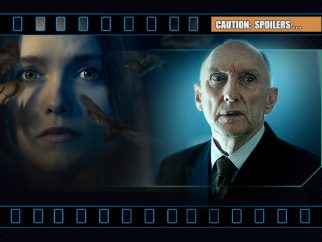