Wilford and Layton start to make their moves, but how far is each prepared to go to get the upper hand?

With Mel’s latest communication not arriving on time, both Wilford and Layton realise that their respective time for action is growing short and each put options in to play that are risky and dangerous, especially with either side having more information than the other may realise.  There are difficult decisions to be made, for personal safety and for the wider lives aboard the two trains and it seems no-one’s hands will be totally clean when the smoke clears.

Just how far is each side prepared to go to pre-emptively protect their own?

There’s definitely a sense of foreboding in the latest episode of Snowpiercer, a feeling that real trouble is bubbling under with everyone’s agenda about to boil over… but it’s the (relative) clam before the storm – a lot of posturing and talk about action until that action actually appears in the final act and dying moments.

Josie (Katie McGuinness) is still below a lot of bandages (and prosthetic burn effects) and is definitely putting her heart and soul into the cause, enduring huge amounts of pain to make sure she’s wide awake enough to hear anything of Wilford’s plans. The moment she is being operated on, but is fully conscious, is the stuff of nightmares. But Josie’s scenes also bring some emotive, less traumatic moments with ‘Icy Bob’ (actor and Deadpool stuntman Andre Tricoteux), Wilford’s cold-infused soldier. There was already a sense he was a Frankenstein’s monster of sorts (and a more fantastical nod in a series otherwise quite down to frigid earth) but here we see more of that analogy play out as it turns out that there’s a more thoughtful soul underneath – one who might actually keep secrets for Josie, even if he’s not fighting for Snowpiercer itself. Miss Audrey (Lena Hall) gets to spend more time with Wilford, though her somewhat predictable subterfuge does lead to whatt may or may not be a crisis of conscience late in the day. Equally Mickey Sumner’s Beth Till also finds her emotions and talents strained as she finds herself in a harder and harder emotional place during her investigations of the attacks on the Tailes.

But this week’s most effective character of choice turns out not to be Josie, Audrey or Till – Josie’s own turn for narrating the opening monologue later diverting into her more plot-driven role  as a spy. Instead, it’s the quiet gathering of information that Zarah (Sheila Vand) is doing across the board that sets off our radar. Once a very cursory character, Zara is now establishing herself in her ‘hospitality’ role but networking in a way that’s making her privy to a lot of secret information and able to whisper things in the ears of those who might need a ‘push’. It’s not clear if this is all for a good cause or  given her support of actual murder, if there’s a Lady Macbeth aspect of her manipulating things for her own good rather than the collective whole. We’ll see how that works out.

The actual killing of Terrence (Shaun Toub), the underworld mover-and-shaker and a character who seemed ripe for further development, is something of a surprise. It seemed far more likely that Pike (the ever-askew Steven Ogg) would fail in his mission and create more distrust and power-shifts within the train with Terrence shifting allegiances. There’s a shock-value to the method of death, perhaps some further narrative to be mined from the previously-traitorous and opportunistic Pike having an emotional consequence  to it all… but it seems more like a plot-development to cast further shade on Layton’s moral standing. Now he’s not just lied to the train about Melanie’s success but also sanctioned murder. That’s even before we get to hints of cannibalism back in the days of being a ‘Tailie’ and the fact that his innate distrust of so many people is fracturing his leadership skills.

The slaughter of most of the ‘Breakmen’ at episode’s end is brutal and bloody but in the moment it wasn’t clear who the assailants were. The hooded aspect  of the attackers points to it being the people who have also been attacking the Tailies  – ie: part of Wilford’s plan to sew chaos. But in the confusion there was also an argument that it was Snowpiercer security  pre-emptively taking down a perceived threat of Wilford using the Breakmen  themselves (but security having deniability in the aftermath.) The Breakmen largely seemed loyal to Wilford so their demise is going to cause wide distrust and the pointing of fingers at others – as well as weakening some of the brute force aboard Snowpiercer.

Though next week looks to be filling in Mel’s perspective of past and recent events as she’s  ‘Many Miles from Snowpiercer‘, hopefully all will be clearer soon. 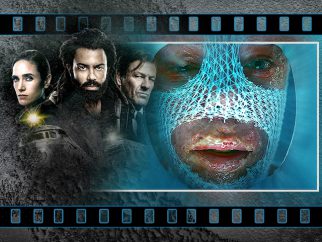