There's more grisly goings-on in the streets of 19th Century New York in season two of 'The Alienist'...

After uncovering the truth about high-society links to the killing of young men in late 19th century New York, infamous psychologist (or ‘Alienist’ in the era’s venacular) Laszlo Kreizler, writer John Moore and the fledgling police service’s Sara Howard have had mixed fortunes. There names have become well-known, enough for Sara to leave the police and start up her own investigation agency, but also to win them continued contempt from some areas of the law and the rich and powerful who see them as an annoyance.

But Lazlo’s struggle to clear the name of a young destitute mother whose baby has vanished while she was in a sanitarium fail and she is sentenced to die by the electric chair, pleading with him to find the fate of the baby that many believed she had killed. When another baby is stolen from the secure home of a Spanish diplomat, the parents seek out the discrete advice of Sara who decides to bring Kreizler and Moore on board to help. But when word gets out of the child’s abduction and an infant’s body turns up in a toy store, any hopes of keeping the investigation quiet evaporate and now a series of different agendas come crashing toward the trio’s efforts.

It’s clear that whomever is taking the children has a specific reason, but there are many people as invested in stopping the investigation as there in solving it…

Adding to the likes of recent high-quality murder mystery period-dramas such as Penny Dreadful: City of Angels, Perry Mason etc, we now see the return of The Alienist. Set in the the New York of the late 19th century, every penny and dime, dollar and cent of the budget is on-screen with almost seamless CGI and high-end set decoration working together to present a lost world that’s recognisable in minute detail. Cityscapes that would have been impossible to create on less than a blockbuster feature-film budget just a few year ago are sprinkled throughout and yet it’s the street-level detail that also impresses.

The main story is predictably uncomfortable, dealing with the kidnapping and killing of infant children and a link to a high-society doctor willing to perform favours for the elite, but the trail leads through all levels of society – from those in positions of great influence to those who have their own empires of dirt closer to the drains that the flotsam and  jetsam of society ignore at their peril. Like some of the other shows mentioned above, the drama is a magnifying glass to examine the changing and sometimes non-changing parts of the world around us, then and now… we’re constantly reminded of the diffident racism, blatant sexism, the casual brutality and the overt class-system which dictates the way many of our lead characters interact with each other. Power often corrupts and we see plenty of examples of such power being wielded by those who seek more of it and more profit. It’s more grim, less technicolor than contemporary dramas and characters demonstrate it all without fear of reprisal, but it sometimes makes uncomfortable viewing when you spot modern parallels.

It’s true that for all its production values and talent involved, the first season of The Alienist – based on the main plot-points of the original 1994 book by Caleb Carr and produced as a series when previous film attempts had failed to progress into production – sometimes moved a little too laconically through it dirty crime-ridden streets – always rich in texture but often slow in momentum.  This year’s story is not so much an outright sequel to the first season as a closer adaptation of the follow-up book, Angel of Darkness, published in 1998. Perhaps wisely, TNT‘s broadcast strategy is to run two episodes each Sunday over four weeks, which may help with the pacing for viewers.

Daniel Brühl  (who will soon reprise his role of Zemo in the upcoming The Falcon & The Winter Soldier) continues to give us a Laszlo Kreizler who is the sort of intuitive psychologist to whom Sherlock Holmes and Sheldon Cooper could give tips on better bedside manner – prone as he is with an almost pathological bluntness to speak without thought of the emotional impact of his words. He’s an observer of human nature and far from emotionless… but often with an inability to process anything other than in the scientific level one might write a thesis. In some ways he’s the smartest person in the room, but in many ways not. That accolade should probably go to Dakota Fanning’s Sara Howard who has most of the best lines in the first couple of episodes and handles bullies with a tenacity missing from many of the men in her orbit – indeed she’s arguably the second season’s most valuable asset. Luke Evans as John Moore sometimes get the short straw in getting the upper-hand in his scenes, but he plays the principled writer as a man of integrity, determined to do his best, often having to act as the barometer to his impulsive colleagues.

Fans of the original books will see various differences in the plotting, but the heart of the books remain and though sometimes too somber for it’s own good, this second run remains interesting and involving – slyly referencing some of the investigative and scientific practices that would later become common-place in law enforcement. . Though he continued to write other characters in other settings, Carr has only written two novels in the Kreizler series, so it will be interesting to see if TNT continues to visit the characters and time-period again after this run. It’s an expensive, time-consuming show, but one likely worth the investment. 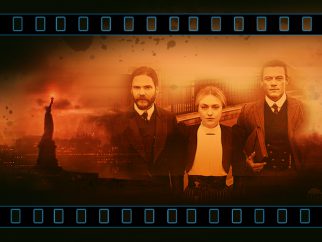