Social/Engineering - The 'Engine Eternal' threatens to derail from a clash of internal and external problems...

In the wake of the trial Melanie realises that the reactions to the verdict could tear the train apart on a social level. But that could become a literal catastrophe when a minor engineering fault escalates into a situation that could derail the 1001-carriage transport and her knowledge of the train’s design becomes imperative. Meanwhile, Layton has escaped the ‘drawers’ but his hunt for Melanie and the answers she has for him will have to wait if everyone is going to survive…

While a majority of the preceding episodes of Snowpiercer have deliberately steered away from the ‘train’ aspect of the premise and more towards a study in class-systems, the series finally remembers that it’s on a moving vehicle and gives us a developing problem with the mechanics. Perhaps a good metaphor for an equation about the ‘sum of its parts’, a minor problem failing gear system threatens to cascade into a bigger issue and derail the train… and it becomes a fairly generic race against time to rectify the problem – one which precariously hangs just out of reach under one of the carriages.

It’s a strange choice to have Jennifer Connelly’s Melanie be the person who has to do the literal heavy-lifting.  So far, she’s come across as the capable, steady-hand, but with a strong eye for social engineering rather than the actual, physical boiler-plating.  At the start she shows her ice-cold hand in trying to diffuse signs of a Third-Class rebellion, playing hard-ball with Miss Audrey (Lena Hall) when a work-stoppage is threatened. Her decision to threaten the dissatisfied ‘Thirdies’ with swapping some of them with people from ‘The Tail’ shows why those rear-end carriages are most useful – as a deterrent and warning to those further up the train). It’s great that she’s been given more to do and is being shown to be multi-faceted and physically capable, but narratively it really doesn’t make a lot of sense as we’ve already been introduced to several characters who would have been better suited and more logical choice. (We know she’s had a hand in the design of the train, but it’s still questionable to risk her life).  It’s also not a huge surprise – in fact, something of a trope, for everything to be saved with mere seconds to spare.  It’s all decently executed but as we aren’t likely to lose Melanie nor the entire train, it’s fairly obvious that it’s going to be resolved and therefore doesn’t generate the tension expected.

There are some interesting developments as Layton (Daveed Diggs) avoids discovery thanks to his intimate circle of associates but finally confronts Melanie about the people being stored in the ‘drawers’ and finds out that far from those people being outliers and threats being conveniently kept out of circulation, the names on the list of occupants there is actually the people Melanie has deemed essential to survive in a worst-case scenario – with Layton’s name included.  Naturally it’s a conversation that doesn’t get fully explained as the potential derailment is the main imperative and distraction, but it does add another layer to Melanie’s larger plan and strategies beyond her job.

Trouble Comes Sideways better illustrates the combination of internal and external threats to the ‘engine eternal’ and though it seems formulaic in many ways, it continues to lay down the tracks to a more dove-tailed second half of its first season. 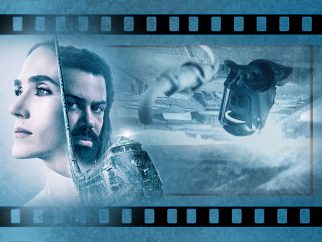