As the ambitious 'City of Angels' bows out, was it the show we expected or the one we deserve?

The reconciliation of the Vega family is cut short as Lewis brings word of Diego’s lynching – sadly, knowing full well the chaos and violence that it will bring.  As the news hits at the Crimson Cat, Fly Rico tries to find the words to placate the crowd, but Rio seizes the moment with her cry for vengeance. Though it seems reason may win the day, Magda’s machinations are not so easily thwarted and her other aspect, Elsa, manages to assist in inflaming the chaos… with Peter and his family catching the brunt of the violence when they are trapped in their car.

By the time morning comes and outright rioting fades, there are casualties scattered across the city.  But in the wake of events, can Molly and Tiago ever hope to be together, can anything stop Townsend’s plans for the freeway and what terrible dreams does a young scientist have for his next project?

As the ‘Day of the Dead’ begins, it seems Santa Muerte’s presence is imminent…

Early in 2020 we had Watchmen, running its almost cosmic through-line across race-relations through the decades and now we have Penny Dreadful: City of Angels with its saga of whispering spirits, manifest destiny and endemic corruption in places of power. It’s telling and tragic that a year like this needs and warrants such timely tales.

With this new, more ambitious and arguably superior incarnation of Penny Dreadful, showrunner John Logan has created a triumphant masterclass in slow-burn tensions and study of the human monsters that sometimes overshadow their demonic counterparts. It’s clear from the finale that the story of 1930s Los Angeles is far from over and on the basis of the quality we’ve seen thus far, it seems inconceivable that it won’t get a second season to continue the telling of it.

However should the show not return for any fickle reason, Logan makes sure that he leaves us with a battle-cry lament and a singular line of dialogue that will undeniably echo beyond the screen. Some will argue that the show wears its politics on its silken ‘chicano’ sleeve and, yes, there have been scenes where the subtext has overtly become the text, wearing its gang colours with pride. But the show-runner and his dialogue speak less about sheer ‘capital-P’ Politics and more to the fragility of basic decency and the ease with which opportunism comes. One could argue it highlights weaknesses or strengths of character to varying degrees but the larger truth is more about recognising the difference when the moment demands it.

The riots, in the wake of Diego’s death, smoulder for a few minutes, teetering on the edges of rhyme and reason before exploding into chaos. They start the episode rather than thread through it as expected but the aftermath is predictably dangerous. Though this was written and filmed months ago there won’t be a single viewer that doesn’t see comparisons between the real-life protests, anger and violence of recent weeks. Anyone watching can offer their thoughts and prayers for peace, the hope that things will simply work out without tragedy and turmoil and perhaps a pivot towards better angels… while fully understanding the burning resentments and frustrations that spark around the social tinderbox.  We see the manipulation that goes on to stoke the situation and, for the very first time, we see Magda-aspects Rio and Elsa in the same scene, acknowledging each other, though skillful editing means we don’t need any CGI trickery to make it happen. It’s as if Magda has thrown a grenade and is simply counting the seconds until the collateral damage ensues.

Anyone expecting a resolute bow, tying off loose-ends and with comeuppances rather than come-hithers may be disappointed and the show unapologetically feels like it is ending a singular chapter rather than a book or volume (though we finally got an answer to the original murder investigation that kick-started the series and which most of us had long since forgotten, which is one of the show’s few narrative disappointments). Maybe not as ‘epic’ as we were expecting and with unusual beats and pacing it wasn’t perfect but it certainly had a power all its own. The compelling if somewhat downbeat pause of an ending is one that demands that second season. We lose some characters (maybe not the ones we were expecting) to their fate… but there are no real heroes here, only almost Shakespearian winds blowing our ensemble of characters around and watching how they cope. There’s barely a single adult character who survives who hasn’t been morally compromised in some way over the run and with the exception of Magda herself, there’s often been moments of sympathy for even the most despicable  human characters.

Populated with actors who brought their A-game and never disappointed (Nathan Lane has rarely been better, Natalie Dormer proved her worth but the entire ensemble – from veterans to newcomers proved impressive) this was another entry in an impressive year of television drama – always ambitious even when it faltered.. Like a West Coast West Side Story scattered with mystical danger,  Penny Dreadful: City of Angels may not have been the series we were expecting, but it may be the one we deserve… 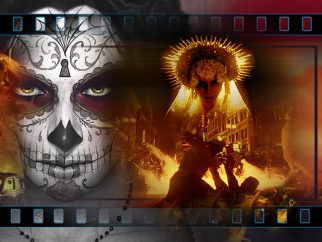