In 'Hide and Seek', the series finally exposes some hidden truths and there are obstacles to Magda's plans...

Magda has begun to draw together the various threads with which her personas have hooked their men… but suddenly they seem to be resisting her wishes. Craft, Townsend and Mateo all seek to carve their own path rather than the one ‘Elsa’/’Alex’/’Rio’ is forging for them in blood and each find ways to try and resist her influence.

And as Lewis and Tiago take time out from their official police duties to trace the Nazi influence now permeating Los Angeles, they discover that the likes of Townsend and Miss Adelaide are more than ready to derail their efforts…

While watching Magda’s machinations has been a consistent through-line and source of enjoyment on the series it’s arguably even more satisfying to see those plans wavering a little and reminding her (and us) that while she exerts uncanny powers, they are still somewhat governed by the will of man. She can suggest, infer, manipulate and influence, but every choice on that road to Hell has to be taken willingly.

This is one of those episodes where everything is subtlely in motion and while many of the various threads don’t have a lot of huge forward momentum, many of them feel like they’re getting due care and attention and some interesting wrinkles along the way. We’ve seen Magda/Natalie Dormer’s many personas keeping the men she’s influencing on short leashes, pushing them one way or another as she positions them for power and influence. But this is really the first time we’ve seen those men push back in any meaningful way. Peter Craft (Rory Kinnear) explicitly defies the wishes of his ‘Elsa’, straight to her face, in keeping Maria on as maid and also in standing up for himself at the Bund meeting. It turns out Peter’s sympathies with the Nazi cause are more to do with his belief in the purity of race rather than killing ‘others’. He has strong reasons for not believing in unnecessary bloodshed  – his real surname is Krupp and he hates his family’s legacy of making munitions – and, going against the grain of others in his group, has no wish to take part in some Teutonic holy war. It’s possibly a major miscalculation by Magda as to which buttons to push. Kraft/Krupp may be a Nazi and been the easily-manipulated plaything so far, but it’s interesting how the show has made us feel, in turns, revolted and sympathetic to his position – a mix of great writing and performance by Kinnear. There’s little doubt viewers will have applauded him just a little for this episode’s appearance of backbone.

(But it’s also worth noting that Piper Perabo has her own best scene of the series as Peter’s nearly-ex Linda also flexes some muscle, making it clear to Peter that though he may have her locked away for the moment, she has some influence of her own and at her first opportunity she’s going to make him – and Elsa – pay dearly for everything they’ve done…. and suddenly your loyalty is largely with her and her rightful vengeance).

Townsend is also defying Alex’s wishes as well as taking some calculated risks when he and Kurt (Dominic Sherwood) head to an underground speakeasy where more fluid sexuality is welcomed and protected. The club, with more than a hint of Cabaret – except with a warmer palette of colours – is a fully-formed establishment brought to believable life by subtle choreography and set decoration. Alex herself subsequently lies to Lewis (claiming she is really Alexandra Mahler, a Jew who escaped Vienna when the Nazis invaded). She apparently agrees to help Lewis find out the extent of Nazi influence in Los Angeles and it’s fascinating because we know she can’t be trusted and that her agenda is more likely a way to keep her boss in line should he stray from her designated path.

Once again, the dialogue between Townsend and Councilwoman Beck has the subtext becoming the text with a conversation that positively flows with contemporary analogies to the current administration and battles on the news. And once again, it’s beautifully delivered but arguably just a little too on the nose, feeling like it was sledghammering the point home  – though it’s important to remember this was written and shot a long time before the recent weeks’ events, if not a longer prevailing cultural malaise.

The horror, as it were, is psychological when it comes to the grown-ups, but once again the most unnerving genre imagery comes within the Craft household as Frank (Santino Banard), Magda’s progeny – or extension of her demonic self – causes havoc, terrorising young Tom (Julian Hilliard) and Maria with both his Child’s Play demeanour and some more spooky special effects.

There’s genuine peril throughout the episode and the fear that some of the most beloved characters in the ever-strong ensemble may still not make it out of the season alive, though their steadfast efforts make us root for them all the more. The shoot-out at the end of the episode thankfully doesn’t result in an expected fatality it first suggests, but it’s a nice gangster-like touchstone for a show that’s flirted with that genre throughout (and maybe this means we could see  more of another delight: Brad Garrett’s Benny Berman).

All in all, Penny Dreadful: City of Angels is high quality stuff and Hide and Seek – directed by Sheree Folkson – proves no exception. With two more episodes to go in this run, it’ll be interesting to see how things will dovetail together… 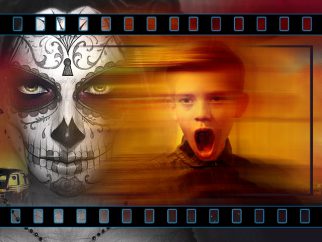