Some visual flourishes aside, the 1001-carriage train is moving too slowly to match its source-material...

Layton comes under more pressure to solve the murders that have taken place further up the train. While genuinely looking at the crimes and factors involved, he also tries to find a way to blueprint the train and send a message back to the tail-end for when the revolution comes.

But the clash of agendas and a raft of familiar faces in new environments means that he has to pick his moments. He has few friends but a growing list of enemies eager to see him fail.

As an avalanche causes a near-disaster, which of the train’s ‘passengers’ will end up pacing the highest price?

It’s clear by the end of the second episode of Snowpiercer that while the name and the concept of the original graphic novel and film continue to be front and centre, the approach is going to be very different. Not bad, but simply that different approach to a common theme, applied with a different set of priorities and sense of endgame.  It’s as if someone saw the scenery of the original and decided to use it merely for backstory. No longer is there that innate urgency of the push from tail-end to engine never knowing what awaited you… now we dart around the carriages exposing the inequalities from the start and settling in for a more sedate posturing on the nature of class, littered with a few dead bodies. Snowpiercer the film was a journey with extreme momentum, Snowpiercer the series is a slow detective story aboard a speeding train with its eye on an entire canvas rather than one moving point.

It’s that special kind of vibration with the world literally shifting beneath your feet, that’s missing from a show that should hum with it…

All the time, it feels like the show wants to be seen as edgier but can’t quite commit. There’s flashes of decadence but rarely anything truly shocking – the nudity is more camera-angle chaste and the more lurid mainly lip-service. Physical violence is quick but brutal and often saved by imagery rather than intensity (the punishment of an arm being exposed to the frigid cold outside and then its brittle stump smashed apart is more memorable than any fist-fight). Character-moments are fine and there are key scenes where its shown just how far some members of the tail-end will go to protect their own. The idea of a perfectly-balanced if ruthless eco-system is nice as a concept but not always straight-forward in execution. When an accident exposes the interior and freezes a carriage full of cows, it’s said that the meat-supply has been drastically-depleted and the tail-end will have to have more rationing. That makes good dystopian drama and angst but doesn’t make sense if there’s a 1000 carriages and only one has been damaged – or else speaks to a huge inefficiency on a train we’re told thrives on such.

But while production-designs largely play well to the differences that template-proportioned-carriage environments can have when varied elements are applied (light, colour, use and amount of tenancy that encompasses farming, night-clubs, dining-cars and living quarters), people do a lot of standing around and talking about a possible serial-killer whose victims are separated by carriages and time. With the exception of a few exterior avalanche/wasteland shots and calls of ‘Prepare to brace!’‘ (also the title of the episode) there’s little that makes the high-speed train’ setting stand out, which it should. Almost exactly the same story could just as easily be set in an enclosed post-apocalyptic tower-block with any horizontal push switched to vertical. Both could manage good drama among disparate inhabitants, but it’s that special kind of vibration with the world literally shifting beneath your feet, that’s missing from a show that should hum with it.

As previously-noted, this is all acceptable stuff, decent as a high-concept drama and watchable with moments of delight, but what could be an exceptional ticket-to-ride is instead a fairly pedestrian venture relying on touches of abstract prestige… 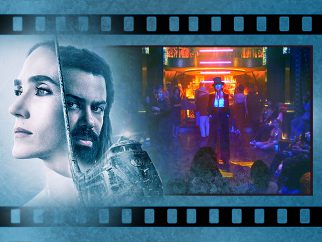