The 'Penny Dreadful' spin-off heads to bed, bad and beyond as it reaches its half-way mark...

In the wake of the grisly murder of a police-officer, the city is fraught with friction and further violence. As Tiago and Lewis try to balance  questions about their original case with trying to track down the latest culprit, Tiago has no idea that the previous day’s death was at the hands of Mateo, who was defending their sister’s honour. As Magda puts pressure on all the men that her various counterparts control, she takes every effort to ensure their loyalty and seems to be succeeding.

Tiago, trying his best to believe the best of everyone may be starting to realise some of the lies he’s been told. He will have to make different choices to uncover the truth… but what is the truth and how can a story change in its telling?

There’s plenty of lust at the top of Children of the Royal Sun, this week’s entry of Penny Dreadful: City of Angels, with Tiago and Molly doing the deed in her love-nest, while across town, Mateo finds himself measuring up (quite literally) to Rio and Fly Rico…and Peter and Elsa consummating vigorously on consecrated ground.

We’re at the halfway point of the show’s first season (with a renewal already confirmed) and it’s proving a big draw on its production values – 1940s Los Angeles captured perfectly with great window-dressing and great, subtle CGI backdrops. But there is a danger that however good its political and personal intrigues and the performers presenting them – and all are top notch – that we’re getting a little complacent with its more ethereal elements. Dormer’s multiple roles remain effective and impressive as Magda cuts her path through the agendas and passions of those she seeks to influence, but they’ve become so effective that the very conceit of them all being the same demonic presence (and  a show-reel for the same multi-faceted, skilled actress) is now almost an afterthought to proceedings – which, in some ways, is just as it should be. But it does mean that if you take away those transformations, what we have left is high-class, superior soap opera, heavy on passion and period politics but light on the supernatural: a novel idea leaning towards novella levels of betrayal and vice. With, once again, Santa Muerta herself a no-show, it feels like a different show than the pilot promised.

Daniel Zovatto’s Tiago may be lucky in love (at least putting doubts aside about Molly’s past while he plays hooky from work)  but is even more conflicted when he realises that Mateo (Jonathan Nieves) is the murderer he’s searching for. He is faced with confronting another brother and this time refuses to pull the trigger, which may be an act of mercy or a fateful mistake.

Kerry Bishé is also a power-performer giving us two nuanced versions of her Molly – playing to the separate needs of both Tiago and Josefina at different times. In a post-coitus tale of her younger life, Molly relates a positive-outcome from a long-lost stormy night that embraces Tiago’s innate views of human decency, but when she talks to Josephina, the tale of that same night becomes a lesson about human opportunism and abuse and how to move past it. It’s notable not just for Bishé’s skill in disparate delivery, but also in how it makes the audience begin to doubt the angelic songstrel’s intentions: is it just about the life-lessons that need to be heard or does Molly’s easy-deceits carry more dangerous weight and implications?

Nathan Lane still manages to do countless wonders with single lines. Seeing  the huge shrine to Santa Muerta at the back of Tiago’s homestead by Tiago’s mother Maria (Adriana Barraza) he offers a dry “Not Jewish, then?’ that perfectly captures his difference in faith and sense of wry humour but delivered with no disrespect.

It’s a solid episode, evenly balancing a gallery of strong performances that also include Rory Kinnear as the conflicted Peter Craft, Jessica Garza as Josefina, Amy Madigan as Miss Adelaide and Lin Shaye as the sage Dottie Minter. Even Michael Gladis as compromised councilman Townsend gets a dance-number. It’s intriguing and glossy… but as we pass the halfway mark with simmering intensity, will the story keep vigorously stirring the pot or start to bring it to a boil? 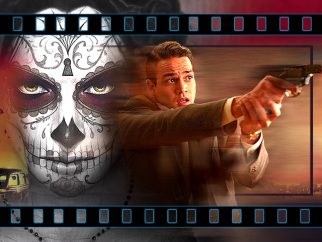