It’s been several years since Jack McEvoy wrote best-selling books based on two of his investigations of killers working below the police radar. Those took him from regional reporter to the heights of the LA Times, but he now works for the crusading website FairWarning  looking out for consumer rights. He enjoys the worthy, revealing work but also misses the adrenalin, fame and rush that his other reporting once brought him. But when Jack is confronted by two police detectives, his fortunes change. He’s suddenly a ‘person of interest’ in the death of a young woman who died from ‘atlantooccipital dislocation’ – or in layman’s terms: a severely twisted neck.

Jack knows he had nothing to do with the death and suspects the police know that too – after all his own encounter was just a one-night-stand over a year before – but he decides to look into what happened. It seems the woman had suspicions she was being stalked but McEvoy starts to piece together a more surprising connections of events. There are several victims who have died in similar ways, though their deaths were attributed to accidents… and each of them recently used the service of a DNA-testing site. Is that a coincidence or is a killer somehow managing to specifically target his best victims using supposedly confidential information about their preferences, behaviour and genetic make-up?

Realising that the investigation could be far more wide-ranging than the usual content of the FairWarning site, Jack reaches out to his old  girlfriend and colleague Rachel Walling, whose last partnering with Jack left her booted from the FBI – but  she’s still an excellent profiler and Jack may need all the help he can get to convince the police there’s a killer on the loose….

With the mixed news that there won’t be a Lincoln Lawyer tv series and Bosch is likely to finish (on a high) on television next year, it’s always good to have a new Michael Connelly book on the actual shelves, especially during the current ‘interesting times‘.

Connelly’s novels are rightly popular, but Fair Warning is a story that feels particularly contemporary and immediate, taking recent topical subjects such as hereditary/genealogy and the lack of regulation for that industry and also the misogyny highlighted by the #metoo movement. It also acknowledges the attacks on the media  from those in high office who question their innate ‘integrity’ and the fundamental changes in journalism as it moves form print to online. (Indeed, I suitably received my review copy of the story from the publisher in electronic form while a COVID-slowed postal service kept the physical novel in limbo). If that isn’t a metatextual comment on new media, what is?

Fair Warning is also a change of pace. If Bosch novels are precise and methodical procedurals with a momentum more suited to a series format (one reason the Amazon Studios show of the same name has been so good) then Connelly’s latest tome feels more like a return to the faster plot of some of his earlier novels such as Blood Work and The Lincoln Lawyer, stories that move along at a far more brisk pace and were ultimately adapted for the bigger screen. Connelly worked the crime beat himself before becoming a best-selling author and it’s clear he’s enjoyed revisiting that point-of-view and flexing that journalistic muscle, even if the landscape has changed.

While Bosch is a seasoned detective with a fairly strict, if practical, moral code and Mickey Haller is the smart but morally-flexible lawyer, McEvoy essentially hovers in the middle ground. Frankly he’s not as smart as either – or quite as likeable, but he’s quick on the uptake, intuitive and ready to improvise and extrapolate with a couple of notable ‘big’ stories in a career that’s covered several decades. Connelly has traced the character’s career-arc, placing him in the occasional ‘cameo’ but visiting him around once a decade – we’ve seen him go from regional journalist in the 1996 debut The Poet to being part of a more corporate identity in 2009’s The Scarecrow and it has also proven to be a barometer on the wider media. But there’s consistently a feeling that Jack himself is getting by more on stubborn attitude, indignation, luck and some useful coincidences rather than the set-apart-level skill of Bosch and Haller. McEvoy’s people-skills, particularly with Rachel, need serious work, he’s somewhat immature for a guy who must be approaching fifty and there are time he needs others to uncover what he’s overlooked. Though the tale is told mostly in the first-person style, one could argue that Jack isn’t actually the hero of his own story, just a participant trying to control his own ebb and flow. He’s a poster boy for sheer tenacity rather than journalism as a whole.

It’s interesting that Connelly has placed McEvoy and some of the action with real-life narrative anchors. The online institution of the title is an actual non-profit site with the same remit of exploring and exposing stories of interest to the consumer and owner Myron Levin, who features quite prominently here, is the real-life proprietor, all used with permission. But if that slightly blurs the line between fact and fiction, there are pros and cons to the result (perhaps not least that anyone looking for that site may now have to work their way through hundreds of book reviews first!) Connelly is a master storyteller and king of the procedural and Fair Warning, the novel, tackles important issues for a modern audience  – who are often complacent and compliant to give up their private information for the most transient of benefits. But in truth this ultimately feels less like an intricate mystery and more a rollercoaster wake-up call and rallying cry for a valuable and crusading institution – one that Connelly actively supports (he’s on the real-life FairWarning‘s board).  However the finished book is undeniably a good page-turner with some surprises, the concept is interesting, the research is solid and the shocking lack of real-life existing genetic protocols and confidentiality loopholes will make you queasy… to the extent you’ll be having second and third thoughts about ever sending off your chromosomes to anyone.

Without spoiling the ending, there will be those whom it will satisfy and others that might like to have seen a resolution that plays out differently – your personal mileage will vary. But the novel achieves the mission of telling a good story and leaves you wanting to see more of some of its characters in future entries. Indeed, beneath a generic cover image that says little about the story within its pages,  Fair Warning is also one of the Connelly titles in which you can see the author planning further ahead and using the current pages to align some of his characters for where he actually wants them to go next.

It’ll be interesting to see that murder beat continue, hopefully before another decade has passed…

Fair Warning by Michael Connelly is published by Orion in the UK and Little, Brown and Company in the US on 26 May 2020. 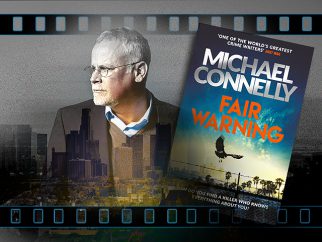