The new Michael Connelly thriller arrives, with the author bringing three of his familiar characters together...

Decades ago, when Harry Bosch was still a rookie detective his mentor was  John Jack Thompson, a man who taught him some of the earliest lessons of his career. Now, years later Thompson has just passed away – but his widow tells Harry she has a ‘murder book’ of an unsolved case from decades before. The file, the metaphorical bones and details of an investigation, should never have been removed from the police department, but Harry agrees to take a look at it and see why Thompson took a personal interest in it and asks Rene Ballard to help follow-up some of the leads.

But the file raises more questions than it answers.  If Thompson was interested in solving the case, why does it seem he never worked on it after taking the file – and if that wasn’t his motive, what was?   It’s something that both Bosch and Ballard want to find out, but they each have other – more official – investigations to undertake.  Ballard is still an active officer, called to numerous crime scenes that take her time and Bosch may be off the force, but he’s taken an interest in one of half-brother Mickey Haller’s active cases and lawyer undertakings.

But with so many diversions and potential conflicts-of-interest, will Ballard and Bosch be able to keep their wits about them when every single detail could make or break their cases?

There was a time when reading a Harry Bosch novel usually meant one main or possibly two intertwining stories, the veteran detective often dealing with a major case and some demanding aspect of his personal life.  Reading the latest book from Michael Connelly, it’s clear that such simple, carefree days are gone.

Given his close involvement with Amazon Studios‘ Bosch adaptation, perhaps it shouldn’t be a surprise… a tv series has to spin more plates at the same time and helping pace the multi-tasking narratives is clearly a newer challenge that Connelly has enjoyed. The Night Fire, published this week, is positively bursting at the seams with separate cases split between Bosch and the more recently-introduced protagonist Renee Ballard, a younger detective but one with the same sense of drive. There’s the main cold case file – one possibly stolen by Bosch’s mentor, the suicide of an eleven year-old girl, a transient burned to death in a suspicious tent fire and a judge murdered in a car-park with an apparently iron-clad prosecution case against the suspected killer… and these are just some of the threads that wind within the pages of this latest tome.

There’s a case to be made there’s too much going on and that a season of tales don’t all need to be squeezed into one novel as they seem to be here. One of those above cases drops off the radar despite the feeling it’s going to get picked up later and as nice as it is to catch up with Bosch’s daughter Maddie, a few brief mentions of a stalker on her campus seem surplus to requirements and  lead to nothing, getting resolved ‘off-camera’. However the main threads are (as ever) satisfyingly presented, intriguingly teased and mostly resolved and some dovetail nicely with each other with just the right amount of literary convenience.  Bosch’s half-brother Mickey Haller, the ‘Lincoln Lawyer’,  has a return appearance, making a significant contribution to the direction of Bosch’s own mission to make sure justice is really done. There’s also a feeling towards the end that Connelly is setting up something dramatic for a future storyline and antagonist, but it will be interesting to note if a brief epilogue curtails or enhances that opportunity.

A best-selling writer and utter master of the procedural, deftly balancing plot and pace to show how hard the job can be for tenacious, honest, hard-working law enforcement… without making them angels…

But ultimately, Connelly has maintained his status as one of the best crime writers around by a variety of talents beyond being able to just spin a tale. He knows the genre well (once being a crime reporter, himself) and largely resists needless stunt ‘twists’ except when they serve to make a story better  paced (rather than merely surprising for the sake of it). He also allows his characters to evolve, slowly learning from past outings, rather than going through case after case by rote. Ballard is a fresh addition to the Connellyverse (Is that a word? It should be) and allows some welcome fresh perspectives from which to approach the stories. And Bosch himself  is now noticeably older – walking with a cane after an operation and with possible foreshadowing regarding aspects of his future health, not to mention bristling a little when Ballard teasingly calls him ‘Dad’. (Though it’s good that Connelly has given us a relationship that foregoes the usually obligatory sexual-tension and keeps the characters as respectful partners for a common cause rather than anything age-inappropriate). In fact, the author purposely gives them their own sometimes unattractive fault-lines: both have their foibles and tendency to provoke others and that sometimes makes their job harder than it should be.

However, The Night Fire proves why Connelly’s audience continues to grow. A best-selling writer and utter master of the procedural, deftly balancing plot and pace to show how hard the job can be for tenacious, honest, hard-working law enforcement… without making them angels.

As ever, picking up the latest Connelly story  is a necessity for all discerning crime fans. 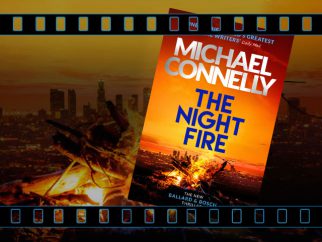