After lengthy negotiations, Lauren Cohan's 'Maggie' will appear in the next season of 'The Walking Dead'...

Whiskey Cavalier has been picked up to series at ABC which means that though Cohan will still be returning to AMC‘s The Walking Dead it is likely to be in a ‘recurring’ role at best with both productions working out a shooting schedule to suit.

Whiskey Cavalier’s premise is described in releases as following “…the adventures of tough but tender FBI super-agent Will Chase (codename: Whiskey Cavalier), played by Scott Foley. Following an emotional break-up, Chase is assigned to work with badass CIA operative Francesca “Frankie” Trowbridge (codename: Fiery Tribune), played by Cohan. Together, they lead an inter-agency team of flawed, funny and heroic spies who periodically save the world (and each other) while navigating the rocky roads of friendship, romance and office politics.” 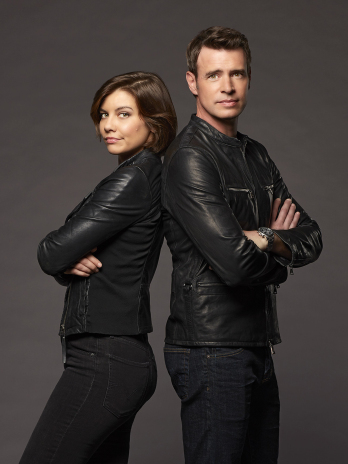 Despite much consternation and questions as to whether Lauren Cohan would be returning to The Walking Dead as ‘Maggie’ for the ninth season of the hit zombie show, it appears that a deal has been reached – though it’s not entirely clear if this will technically be defined as a  formalised central or recurring role.

Cohan and her management team had been negotiating terms of her new contract – her previous deal ran out this past season – with a position that she should have more pay parity with the likes of fellow stars Andrew Lincoln and Norman Reedus. In the Robert Kirkman comics on which the show is based, Maggie is most definitely one of the core characters and though the television series has been edging her character in the same narrative direction, she has not been quite as centre-stage in recent episodes. The season finale left her very angry at Rick’s decision to let Negan live and plotting her own revenge.

She apparently rejected an initial contract offer and the rumour-mill was fueled by the news that she signed up for and filmed a pilot for a new action/dramedy show Whiskey Cavalier alongside Scott Foley for ABC.  No formal decision has been made as yet on whether that pilot will definitely go to series. Sources indicated it would be possible to schedule workloads around each other, but given Maggie/Cohan’s popularity, it certainly put pressure on all parties to work out their next moves. Her TWD co-star Khary Payton had previously posted ‘Pay the woman!‘ to his Instagram feed.

The Walking Dead‘s ninth season is due to begin shooting next week with an expected broadcast in October.

Black to basics: ‘The Predator’ snares a revamp…