In the latest 'bonus' episode we find Daryl having seven years of dog-day afternoons...

Daryl and Carol, both have their reasons to get out from the camp and to scout the surrounding area for hostiles. In recent times their unique bond has been stretched as both made questionable decisions, all of them with consequences that they are finding it hard to ignore. They come across a cabin that Daryl remembers from his time away in the wake of Rick’s ‘death’. During those lost years, Daryl’s contact with the others was limited but he did discover another loner named Leah and over a long period of time the two formed first an uneasy trust and then perhaps something more.

But what happened to Leah and will the memories open old wounds for Daryl?

Daryl and Carol are two of the most beloved characters in the Walking Dead universe so it’s a bit of a disappointment that an episode designed to revolve around them and their undeniable chemistry ends up far less interesting and eventful than one might hope. Given the week’s format and the covid protocols it was filmed under there’s no sign of any other regulars, but the familiar faces are fine. Reedus emotes his signature role in the prepper-hunter way that only he can and Melissa McBride is always good in her scenes and doesn’t disappoint here, though she’s under-used an little more than an occasional foil and punctuation for Daryl’s story.

At least in the short-term any of the so-called ‘revelations’ and ‘key’ moments really don’t have any obvious consequence.  We learn through a myriad number of time-changes – starting seven years ago and working irregularly forward to the ‘present’ – what Daryl was doing when he was away from the others in the wake of Rick’s ‘death’. Daryl and Carol occasionally meet up but it seems that they are now on different roads – she with Ezekiel at The Kingdom and Daryl existing on the fringes as a more nomadic survivor. Most of the time, we’re told Daryl was still out looking for Rick’s body (and – unsurprisingly – not finding it) but even a committed friend/brother like Daryl would surely have given up the task after years had passed and any ‘remains’ were likely to be long gone, even if/especially if he’d ‘turned’).

Daryl’s searches bring him into the orbit of a woman who – at least at the start – likes the solitary, distant life as much as Daryl. They survive an early encounter with each other, but subsequently keeping their just-tolerant distance, only slowly (over months and years) making any allowances and then striking up a purely pragmatic cycle of checking each other’s welfare.  We slowly learn that her name is Leah, another lone survivor after numerous heartbreak and death.

Over the years viewers have questioned Daryl’s sexuality given that he’s  rarely attempted any kind of romantic relationship (which hasn’t stopped the Daryl/Carol ‘shippers who have become more empowered by the news of a spin-off with the couple planned for 2023) and it feels like the episode is built to suggest otherwise, that Daryl did indeed have a romantic relationship, until now off-camera. The problem is that the episode -like the characters – has problem committing to a consistent stance. It infers, rather than states, suggests rather confirms. In short, it’s unbelievably coy for an outing designed to be a ‘must-see’-marketed statement.

Lynn Collins (Bosch, John Carter X-Men: Origins – Wolverine) is fine as Leah and would be a welcome regular if a large chunk of her story wasn’t squeezed into one somewhat contrived, if open-ended episode, a disconnected, diffident interlude rather than a new chapter.  As an introduction (if that’s what it is) it’s interesting, but at this point it feels like an incomplete retroactive insert. Just as Daryl (after moving in with her for ten months) gets called out by Leah for spending so much time away on his searches and he finally decides to commit to her full-time, she vanishes and their cabin is left in disarray, possibly after an encounter with walkers, maybe other hostile humans and we have no more idea of her fate than Daryl does. By the time the credits roll, we don’t know Leah’s fate. (It was reasonable to think from elements in most of the running time – a glimpse of a grave etc –  that we’d ultimately see her death and that would inform Daryl’s later decisions about relationships and re-establishing connections… it would be like post-apocalyptic fridging,  but we don’t even get that).

It’s all meant as a powerful emotional beat and impetus for more stories, but the problem is that it feels like a retroactive insert, we’re just left in the awkward position of asking a) why Daryl – months later – isn’t trying to find her as hard as he tried to find others; b) if we’re supposed to believe that Daryl and Carol accidentally stumble onto Leah’s cabin when Daryl must have known where it was and c)  why we’re being asked to care about a character that we told Daryl cared deeply for but that we’ve never seen or heard about before this week. One can only hope that we do see her again, either in the main show or the aforementioned spin-off, but it still feels very artificial and another notch in the over-stuffed generic tragedy column because it’s hardly likely to be the ‘Daryl, Carol and Leah’ show.

There’s good performances throughout, though Melissa McBride, as noted, doesn’t have a lot to do and Daryl’s hair stays the same for seven years. The episode is certainly another fractured turning-point in Daryl and Carol’s already fragile friendship, but ultimately this still feels like filler, albeit with a nice  Dances with Wolves vibe throughout. The one pay-off we do get is where Daryl’s dog came from (and why he’s named ‘Dog’) and strangely, that all feels more important a connection than anything else. (Am I the only one who would have preferred a TWD version man-and-dog a la  I am Legend?) 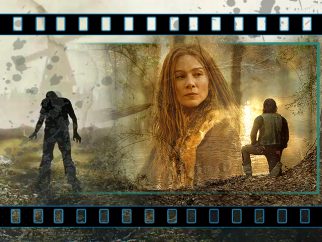 Kung Fu: The Legend Continues to continue at The CW…