Gabriel and Aaron find shelter... but will they find salvation in a bleak extra episode of 'The Walking Dead'?

Gabriel and Aaron are near the last-leg of a scavenger hunt for much-needed supplies for nearly two weeks. They’re using a map provided by Maggie, but so far they have almost nothing to show for their troubles, except bruises, near-misses and a significant amount of mud.

While arguing about turning back they come across a seemingly abandoned factory that isn’t on the map and it ultimately provides them some shelter and refreshment. But as they play cards an set the world-that-was to rights, neither is aware of the imminent danger that is closing in.

It’s a danger that won’t just pit them against an outside force, but possibly against each other…

Smaller character-study episodes of The Walking Dead – and, indeed, any show – are often a mixed bag, some able to really bring characters and performers to the fore and give them more room than an ensemble may often provide, but some others cab be self-indulgent or expose the weaknesses or reasons for the change of pace. Thankfully, One More is of the former variety – bringing in a number of strong performances, real peril and not feeling too much like a COVID-restriction-caused diversion. And, without doubt, the latest episode of The Walking Dead is one of the most nihilistic in some time, essentially typing ‘bleak’ in capitals, underlining it and then circling it with a Sharpie. If you think early imagery of skeletons – long dead, but still huddled together as families like some macabre memento-mori, lost-in-final-sleep floral arrangement – is the most unsettling thing you’ll experience, then you’re in for a rude awakening.

Robert Patrick takes on the role of Mays, a survivor who has been quietly watching Gabriel and Aaron since their arrival and seizes his chance to gain the upper-hand by seizing Aaron’s. Patrick (of Terminator, X-Files fame) relishes the persona of a grizzled cynic who seems convinced that his ‘guests’  and outsiders are just symptomatic of the evils that lie beyond the walls. Mays says he even killed his own brother for stealing meager rations from him… and it’s difficult for Aaron and Gabriel (even with his dog-collar on) to argue virtue over violence against their captor when only hours before Gabriel himself was essentially making the same case – that evil people are now the norm. But it’s the ‘Deer Hunter‘ like test that Mays puts them through to prove his point – Russian Roulette with both Gabriel and Aaron having reasons to not kill each other but also to live for the sake of their families – that truly cranks up the tension. Even by Walking Dead standards it’s all pretty grim and there’ll be blood before supper-time.

Seth Gilliam continues to make a real impact as Gabriel Stokes, a person of faith operating coldly and pragmatically in a post-apocalyptic wasteland. The character, almost the exact opposite of Mays, wants to believe that mankind can be good, but sees little evidence (while Mays simply doesn’t believe in humanity to begin with). But the fact that Gabriel will act in unexpected ways when called for still has the power to shock. Even as Mays teeters on possibly coming around to a more accepting way, it’s Gabriel who strikes Mays with the killer blow (with Aaron’s mace, no less) and explains that there was no way they could take him back even if the redemption was genuine.  Ross Marquand as Aaron also impresses as he holds his own against Gabriel’s reasonings having fundamental differences but having his fellow survivor’s back.

The next beat in the significant spoiler plot-point is that though Mays’ story may be true in most aspects, his brother is actually still alive (and also played by Patrick) and chained up in the secret loft area above the factory – where he appears to have been for a long time. But just when you think the show might be having its theological cake and eating it – both killing off Robert Patrick but letting him joining the cast as a big-name regular – the brother decides to kill himself. It’s a pretty brutal ending after a brutal middle (though bless my wife for blinking several times in the bleak aftermath and then salvaging an atomic-weight of hope from the depressing outcome, saying ‘Maybe they were triplets?‘)

We end with Gabriel and Aaron deciding to finish their hunt with that ‘one more’ location but it’s very clear that both have been fundamentally affected by events and choices, though perhaps not in the same way.

Probably one of the best entries of the extended ‘covid’ season so far, bleak one minute, funny the next, One More suggests The Walking Dead still has power in its pace and stride… 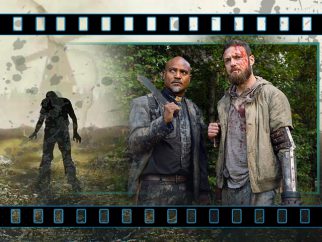