In the thicket of it - John Connolly's latest 'Charlie Parker' story is lengthy but earthy in its excavation of the truth...

Deep in the Maine woods a body has been uncovered with forensic teams quickly establishing that the remains are of a woman who died in childbirth. There’s no indications of what happened to the baby or how the infant or mother came to be there.  Miles away, a white supremacist’s van goes up in flames providing a moment of satisfaction for the person who lit the match. Elsewhere, two figures are the tip of a spear from a group intent on their own survival with efforts that are closing in on an ancient secret and a final chance of revenge against not just individuals but possibly the entire world.

And in the bedroom of a young boy who has only the slightest misgivings about his origins, a toy telephone begins to ring with a message from someone undeniably calling lost-distance…

All of these events and the decisions that brought them here will have far-reaching and devastating consequences and as the threads pull together, Charlie Parker once again finds himself on a collision course with the agendas of others and drawn into the firing line of people who don’t take prisoners, only pleasure in the pain they inflict on others…

To say John Connolly writes novels is a little like saying monks sometimes draw sketches in bibles  – it somewhat misrepresents and under-sells the investment of time and the potential wonder of the result.  To read Connolly’s words is more akin to following an exquisite but turbulent stream of dark thoughts as they wash through a landscape of history, morality, theology and adventure, tilting towards each of those dramatic shores through to its climax.

The expanding world of Charlie Parker, the foundations of which began in Every Dead Thing  way back in the heady days of 1999 and now bring us to 2018’s sixteenth book in the series, continues to be a nuanced one, mature in tone and execution. Over the many books featuring the haunted detective there’s been a balance of elements. In a ADHD culture full of glistening vamps, cable-company zombies and formulaic cops and robbers outings, Connolly has given us a world – and fantastical, grotesque glimpses beyond it – that feels both anciently old and contemporary fresh. Recent entries have looked ever more closely at the sacred and profane deals going on in shadowy, ethereal corners of the homeland, made all the more unsettling by they weave into the mundane and monstrous acts of which a normal human being is capable. The word ‘gothic’ is often used as pop-culture punctuation, but here the style is applied with suitable care and attention to the everyday world it is set alongside.

There are some novels you can, indeed must, read from start to finish at one sitting. The Woman in the Woods  is not one of them. Instead it is an excellent read to be savoured, steadily imbibed over several days, illuminated by a burning fireplace and lubricated by a good whiskey…

Plots unfold like incantations, but olde world magicks aside, there’s guilty pleasure fun to be had with Connolly’s gift for acerbic dialogue.  Louis and Angel – Parker’s right-hand-men, protectors and the closest thing to genuine friends he has – are fantastic creations and the deep, loving relationship the two men have is made all the better by their shorthand sarcasm. The book finds Angel sidelined in the aftermath of serious surgery and with Louis and Parker attempting to keep thoughts of possible mortality at bay as he lies in possible recovery. As the main story of the  discovered corpse and those who are searching for a lost child form the backbone of the book, Connolly uses the Angel/Louis relationship to turn the knife between funny-bone and heart without ever feeling too sentimental.

There is genuine foreboding here and a nagging sense that the body-count will reach deep into the reader’s loyal psyche before the final page – which is something that should always be high praise for a thriller.  That’s not to say that Connolly’s latest is without a few obstacles. This is not a entry-level tale -though not essential, it will play much better to those with at least a few novels worth of character-play.  While the author has consistently given a memorably beautiful lexicon of rich language to the dark antagonists who dwell as outliers of Charlie Parker’s world –  the sinister forces that regularly swoop in to his world to cause chaos (or is it the other way around?) – The Woman in the Woods  finds Connolly often using words and language that will have even the most learned reader reaching for a dictionary. There are times it feels like a perfectly suitable affectation for the timeless nature of a character, but others when it bleeds into other parts of the book and feels just a little like a slightly indulgent flourish based on the true love of letters.  Basically, is Connolly showing a vermisitude of perspicacity with his prodigious pentameter or just, well, building intrigue and having sadistic fun? Either answers works just fine, but it certainly it does add to the page-count that runs close to 500 prose-filled pages and nearly 120 chapters.

There are some novels you can, indeed must, read from start to finish at one sitting. The Woman in the Woods is not one of them. Instead it is an excellent read to be savoured,  steadily imbibed over several days, illuminated by a burning fireplace and lubricated by a good whiskey… in a room where you’ll be checking the locks more than once. In life, it’s the years not the mileage…. in books it’s the quality of the spine, not the page count… and Connolly’s latest dip into darkness is as pliant and strong as ever.

‘The Woman in the Woods‘, by John Connolly, is released today in hardback the UK by Hodder and Stoughton and will be released in the US by Atria in June. 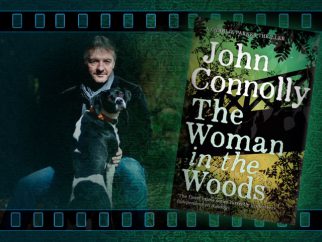