A little light exorcise for the Insidious franchise, but the spirit is still willing...

New Mexico, 1953, and a young Elise Rainier must cope with her ability to see the undead with the regular punishments her abusive father dishes out for each ‘transgression’. When Elise’s mother is killed by something lurking below the house, the family bonds become even more strained and as the years pass, Elise is forced to flee the house, leaving her past and her younger brother, Christian, behind.

In 2010, using her gift/curse to help others who are haunted by beings from a world beyond our own, Elise is contacted by a man claiming there’s something sinister within his home. It turns out that his house is the one in which Elise grew up and she initially refuses. But one way or another, Elise must face her past, her estranged family and the truth of events all those years ago… however there are many kinds of secrets lurking within the past and walls of the house… and not all of them want to see the light of day…

Insidious has managed to incorporate basic old-school frights into a franchise with an interesting mythology – the first two films genuinely complementing each other when viewed together and adding to the story rather than just tacking on some surplus-to-requirements efforts to rake in some extra money.

The fourth film is a perfectly decent if journeyman entry – far less essential or necessary than the first two installments but executed well enough to make the most of a limited budget. That’s not to say that its positioning – setting it in different time periods all before the first film – doesn’t slightly mute the danger the main characters face. You know that the main cast are relatively safe given their appearances later and so the emphasis is less on real peril and mainly on providing the usual chills and ‘behind you!!!!‘ moments that have worked well in the past. Your appreciation of this latest chapter will largely rest on you willingness to go with that format.

Though Patrick Wilson and Rose Byrne were the initial above-credits names for the first two entries, it’s Lin Shaye’s Elise Rainier who has successfully anchored proceedings since and she once again brings an earthy charm and twinkle to the otherwise tormented exorcist….

Though Patrick Wilson and Rose Byrne were the initial above-credits names for the first two entries,  it’s Lin Shaye’s Elise Rainier who has successfully anchored proceedings since and she once again brings an earthy charm and twinkle to the otherwise tormented exorcist. There’s been something of a drip-feeding of Elise’s back-story and how she came to be the conduit for things that go more than ‘bump’ in the night and The Last Key, which may or may not be the actual ‘last’ film, fills in some significant blanks of her journey as we visit the house in which she grew up and the tragedy that set her on her mission.  Bruce Davison is drafted in to play the older Christian and gives him far more wounded gravitas than most of the rest of the ensemble.

The touches of humour are hit and miss, sometimes a good way to punctuate the darker moments but Elise’s goofy assistants – Tucker (Angus Sampson channelling Danny McBride) and  Specs (Leigh Wannell – also serving a co-screenwriter) –  run the risk of overplaying their light relief remit. On the way to the denouement there are, of course, some Scooby-Doo-esque leaps of logic to make things work – this is, after all,  not high brow dramatics, more mainstream frights. The house is conveniently situated on country road on a hill close to a local prison’s Death Row (where, yes, the lights dim any time the nearby electric chair is used) and with a mass of apparent tunnels beneath its basement – which must be a bugger for real estate values and the story has to spin on its heels to suggest why  Kirk Acevedo’s character really take the risks he does. The plot contrives to keep some of the characters in the firing line but the effective use of lighting, editing, a few skewed p.o.v. scenes and the earnest performances keep things rolling along for a suitable one hour and forty-three minutes. However the last act feels like something of a let-down, too comfortable in its template and not fully playing out the dramatic potential of exploring Elise’s troubled childhood and the way it will haunt her in the years to come.

In the end this is lightweight dark chills, perfectly suited for fans of the franchise and for a comfortable night on the couch, rather than hiding behind it. One wonders if there will be more attempts to extend the Insidious brand, but this might prove the best place to offer last rites.

Insidious: The Last Key is released on DVD this week… 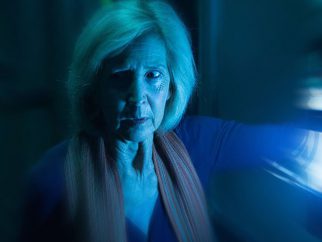