It’s 1997 and in Burdon County, Arkansas, a young black woman lies dead in the undergrowth, just the wrong or right side of a property-line, depending on your view. While there are those who want to catch her killer, there are others who recognise the similarities to a previous unsolved case and who would rather that the past stays buried. Because Burdon is a county in the midst of transformation, of unprecedented investment that could transform everyone’s lives… and the last thing those with any amount of power or financial interest want is another scandal that could wreck any imminent deals.

That is unfortunate, as former NPYD detective Charlie Parker cares little for such priorities. In the wake of losing his wife and daughter to a terrible serial-killer, he is still on a mission to track down everyone involved and his arrival in Burdon – to see if the crimes are connected to his quest-  is about to complicate matters for everyone. However while Parker isn’t there to make friends, he seems exceptionally good at making enemies and despite all efforts to the contrary, he may be the only hope of finding the truth and lies that lie buried just below the surface…

The previous book in the Charlie Parker series was the ambitious, door-stop-sized The Book of Bones – a contemporary tome that reflected all aspects of Connolly’s superior writing style, yet still often felt like two strong stories welded together with some irregular connective tissue that never quite sat comfortably alongside each other. Even some devoted fans found themselves wading rather flying through its many pages, though the journey – as always – was worth it.

The Dirty South is, in many ways, the exact opposite in structure. Though containing all the flourishes of the author, its narrative is more stripped down to the bones of essential story-telling: a small-town crime and a detective story built among the ruined agendas of its disparate townsfolk… and such characters are the flotsam and jetsam at which Connolly excels. It’s mostly set in 1997 the earliest days of Parker’s post-tragedy existence (the loss of his wife and child, depicted in Every Dead Thing, still fresh in his mind) and almost devoid of the sinister otherworldy elements that have shaped the rest of the series to date. In that sense after a book that was organically attached in every way to the mythology of the series, we now have an entry-level story that could prove to be the most accessible chapter for newcomers in a long time.

Connolly loves history and with The Dirty South we have the chance to fill in some details of Parker’s own as we witness a man still hungry and somewhat directionless… he’ll go wherever he needs to find the answers he wants and leave without a glance in the rear-view if he’s disappointed. But like any good story, he’s the x-factor in the mix that stirs things up and even when his actions are ill-advised, the reader understands enough to know his intentions. In the early chapters Connolly sets that up so that it might be in everyone’s interest if Parker moves on, leaving the local chips to fall where they may – but it’s that ongoing friction that proves the most interesting to the reader and which, in some ways, fuels Parker himself. He wants a larger more cosmic justice for the people who personally wronged him, but while he doesn’t wear a badge any more – and he’s not quite yet the worldy force used by otherwordly interests – he still bristles at general injustice and needing to know answers. Connolly also populates the pages with interesting adversaries, dangerous because of the varying amounts of local power they can wield – and knowing that sometimes a big fish in a small pond can be more of a threat than the bigger ocean. As ever, however dark the waters he swims against that tide.

At nearly 450 pages it’s not a short read, but its pacing is better and there’s a momentum and wit that carries the story through. The only quibbles are that Connolly’s signature love of language, flowing like some ethereal force through much of his books,  sometimes makes several of The Dirty South‘s plentiful rogue’s gallery and law enforcement ensemble sound similar to each other and there are a couple of occasions where you find yourself asking if the people in a small town in Arkansas would use certain lyrical phrases or make the worldly references with quite the ease they do. But Connolly deftly channels the period, mixing overt and casual racism in the communities with historical insight on the wider political machinations of the time – and with the reminders of how far technology has come in the two decades since… there are no smart phones here and an internet that’s far from the global outreach of today. There are politics, but they are the smaller ‘p’ variety with tenuous links to the capital variety and it’s interesting to see how the story shifts in a way to make unusual allies and enemies as we progress. The acts of violence that kickstart the mystery are undeniable, but the ways in which people are compromised by position and circumstance is more fluid and while Parker ultimately remains a righteous force, he’s as much his own worst enemy as a threat to others. Long term fans of Parker will recognise their ‘hero’ and his sometimes questionable methods, but Connelly also makes sure this is clearly an earlier version of the same and not as fully-formed in his quest as he will become in the previously penned stories.

The Dirty South was originally due to be published in the spring, but like many titles its release date was pushed back by the COVID virus and the ability to launch properly. It deserves as much and should make Connolly’s army of fans happy once more and quickly find its place on various best-seller lists. 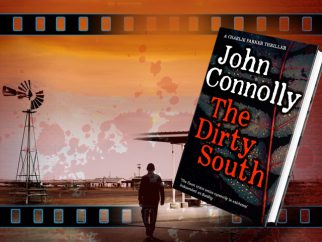