An overt 'Limitless' concept with a limited script, Netflix's latest is earnest and fun but familiar...

In New Orleans there suddenly appears to be a new drug in town – but it’s like no other. If it doesn’t kill you outright, the glowing pill will give its taker five minutes of a super-power. Tied to the user’s unique DNA, the ‘gift’ appears to channel some almost animal-like qualities that some use just get an adrenalin-rush and others use for more nefarious purposes. The police are aware of the power-shift in the area and the extraordinary tales of off-the-wall crimes, but all too often investigations and reports are being mysteriously shut down.

Frank (John Gordon-Levitt) is a cop trying to keep tabs on the drug but not averse to sampling some of the merchandise – which brings him into contact with street-level dealer Robin (Dominique Fishbank). When Frank and Robin face their own separate consequences to their proximity to the drug, they are both put on a collision course with a man nicknamed ‘The Major’ (James Foxx) ) who is rumoured to be the source of the drug.

Project Power is one of those efforts that is quintessentially Netflix… productions that are far superior (A-List names, budgets etc) to standard television movies and fully entertaining yet not quite having that unique selling power hook of a full-on cinematic effort. That niche admittedly covers a significantly diverse raft of content that ranges from decent enough (Bright) to better (Extraction), to full-on impressive (The Old Guard) and Project Power falls in the middle. The somewhat unimaginatively titled two-hour action-thriller taps on the current superhero trend and gives it a twist.

The visuals are impressive for a non-cinema-release: A man with his body in flames having a lengthy magna-punching fight, a chameleon-like robber running through the streets and blending with his background, a woman turning to ice and  a drug-dealer ‘hulking’ out as his body swells to twice its size… all beautifully and effectively rendered by a VFX department given permission to get everything they can on a decent budget. But almost every one of Project Power’s story beats that frame them – however well executed with those visuals –  is creakingly familiar, almost as if someone discovered an Eighties/Nineties formulaic action-movie and realised that they could now bring its most ambitious action scenes to life but choosing to not update the central story.

The premise of artificially-granted and somewhat random superhero powers (with a risk-factor and limited lifetime guarantee) feels a little like the Strikeforce Morituri comics of the 1980s. (The Marvel-published title dealt with humans were outfitted with special abilities to fight an alien threat, but not knowing what the power would be and with the side-effect of the processing guaranteed to kill them at some random point within the year following receipt of their ‘gift’). Project Power‘s abilities can be just as deadly to their user, though there’s not an absolute best-by date hanging over them. But there’s a broader logic that doesn’t work as we discover who might have been responsible for hooking people on the high they get from the power-boosts. ‘Secret testing’ might work for a film/tv show like Limitless where a drug’s effects are more cerebral but simply doesn’t hold water when the results are so conspicuous here that even the cops have become complacent in encountering the extraordinary. The potential and inevitably conflicting powerplays between interested parties wanting a piece of the action are largely down-played and reduced to dark and sinister ‘show-and-tell’ displays and the ‘big bad guys’ are of the boo-hiss 2D variety.

Foxx fully commits to his desperate father role out to rescue his daughter ™ as much as any he’s done and nearly overcomes the scripting problems… and the same is true for Gordon-Levitt who plays a maverick cop who isn’t averse to breaking the rules ™. But the moral and ironic implications of a cop taking drugs to boost his abilities to fight the illegal use of those drugs is really brushed aside after the set-up  and he goes ‘rogue’ because he can’t trust his superiors (who don’t trust him) . Essentially the potentially interesting world-building aspects are ignored in favour of basic gunfire, VFX and explosions, which is a shame. Relative newcomer Dominique Fishback is perhaps the biggest revelation, more than owning most of her scenes and able to give her petty drug-dealer-only-in-it-to-pay-for-family-medical-bills ™ some emotional weight. The moments where she unleashes her more subtle ‘super-power’ of rapping are fun and meaningful and there’s more edge here than anywhere else.

However all due kudos to directors Ariel “Rel” Schulman and Henry Joost (probably best known for their documentary Catfish) for making good use of the New Orleans locations without succumbing to the ‘greatest hit’ backdrops that even bigger Hollywood movies depend on.

Ultimately, a decent two-hour action-fest that should placate those jonesing for some superhero action during the COVID months and perhaps only guilty of settling to growl when it could have roared… 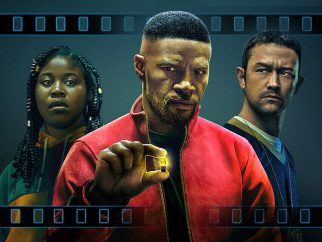