Judged in its own right 'Agents of SHIELD' was great fun - as a support act for the MCU it was often frustrating...

After years of fighting alongside each other, after being a force for law and order and then driven underground, after fighting on earth, for it and beyond it and  after traversing the time-stream and trying to sort out their place in a wider Universe, the Agents of S.H.I.E.L.D. finally face their past and their future together… but in one last desperate gambit across the timelines, who will make it home and what will await them?

Marvel’s Agents of S.H.I.E.L.D. the first string of Marvel‘s modern bow to appear on television, was never quite the show I expected or initially (no pun intended) wanted it to be. Announced back in 2013 with much Comic-Con acclaim, it seemed the concept was a strong one: a show about the trials and triumphs of a team of Nick Fury’s soldiers – the people who didn’t have actual super-powers but supported the characters who did. Like the ‘Damage Control‘ concept of the comics, these were the guys from the background brought to the foreground, the connective tissue between the big-screen outings.  But though that seemed to be the pitch, that’s not really what the show became. Yes, it picked up elements from the movies and expanded them out in a way that a movie-theater outing couldn’t contain, but it was far less military and organisational than you’d think. It was if we were pitched NCIS and presented with NCIS: Los Angeles… more than enough there to be a fun and a recognisable as part of the brand but with a mission statement and presentation that seemed far more free-wheeling… a situation that expanded as the show worked its way through the seasons.

The selling-point of the show being the tv part of the Marvel Cinematic Universe was inherently problematic… especially with the need to avoid spoilers from shifting release dates and essentially being largely reactive to the big-screen adventures in the same way that the stories in the comics had to be shuffled around annual ‘event’ stunts. AOS did it most successfully be weaving in its own events surrounding the Hydra infiltration of SHIELD revealed in Captain America: The Winter Soldier but for the rest of the time it was often  oblique references and asides to theatrical events and the occasional cameos (Samuel L. Jackson’s Nick Fury, Cobie Smulders as Maria Hill and Jaimie Alexander as Sif… certainly not bad, but hardly the heavy-hitters of the Avengers we might have hoped for over seven years). By the time that the Thanos/Snap factor finally threw out that ‘shared universe’ factor, it was already becoming obvious that the MCU and the Marvel Television Universe were distant relations at best.

Ironically, for a show created to be part of the MCU, by the end of its run, there’s an argument to be made that (some dialogue and obligatory references for fans aside) you could watch the entire last run and not be aware of overt links to mainstream Marvel  despite half the cast now being super-powered-up in their own right. And, again, while their freeing from wider continuity might be liberating, it didn’t feel so. There are some pleasant near-misses that could have been bonafide hits. Because while it’s great to see Agent Sousa again (the stoic Enver Gjokaj being a hugely under-estimated actor who has excelled in all the supporting roles he’s played) there was no Agent Carter. We have the wonderfully sardonic  Patrick Warburton but no Samuel L. Jackson. We have Thomas E. Sullivan as Nathaniel, a paper-thin bad-guy and Malick offspring instead of a Red Skull. Instead of going it alone and being totally different OR digging in and celebrating the MCU in style ( full-on side-glances of Marvel‘s history with hours of footage into which you adjacently could slip our tv heroes with VFX and good editing) the show sat somewhere between the two… funny and entertaining enough for a standard tv show but always feeling like missed opportunities for something special on the way out the door. No Asgard, no Chitauri , no Skrulls… all of which could have been fitted in with a little celebratory flexing of continuity but nods to its own history. That would be completely fine for any other show without such unique access to broader archives, but the result was not so much the ‘greatest hits’ than a well-honed band confined to B-sides. Good in their own right, but robbed of potentially primo material.  Just imagine Chris Evans or Mark Ruffalo walking by with a single line…

Clark Gregg as Phil Coulson was the pillar -as actor and character – around which much of the best elements were built. Killed off in the movies, revived in the series pilot, he was the heart and soul, retaining a balance of wonderment and world-weariness even as Coulson’s fate and role consistently changed (being killed as often as South Park‘s Kenny that by the end it’s a punchline not a dramatic point). Chloe Bennett as Skye/Daisy/Quake (depending on the season) was initially the viewer’s eyes into a world-saving career she’d never envisaged and developed into a strong female lead of the ensemble show. Ming Na Wen’s Melinda May was always impressive, able to rise high fight-choreography demands and still keep a dry sense of humour. Elizabeth Henstridge as Jemma Simmons as Iain De Caestecker as Leo Fitz were the British boffins, made for each other but which the show found more and more ways to separate to increase the angst factor (with Fitz largely missing from the final season until he came on to explain everything). Other characters came and went or arrived later  (Henry Simmons as the stoic Mac, Natalia Cordova-Buckley as Yo-Yo etc) but it was always an ensemble show, one of its strengths.

And yet, judged alone and not as part of something bigger, AOS was often a delight – despite all the connective-tissue intentions, AOS regularly ended up settling for just plain good old fun with the budget it had… and there are far worse fates on primetime tv. Certainly I have no problem in declaring myself a fan of the show and the people involved.

Happy to take chances and  press a reset button of sorts every year with its long story-arcs, Tetris‘d into whatever shape needed… witness Hydra, Virtual Reality, Future Shenanigans etc… the show was eventually Marvel/ABC‘s equivalent to The CW‘s Legends of Tomorrow (which came later, but with which the final season of AOS had even more in common thematically as they started time-travelling through the past, trying to put right what once went wrong).  Throughout the seven years there was a sense of the show wanting to ‘entertain’, to laugh as well as set up dramatic moments and if it didn’t set the screen alight on a regular basis, it was still a reliable source of adventure, a cosmic romp.  The final episode had a lot of running around an alien spaceship (that brought back memories of the Death Star) and some Back to the Future explanations were needed to get our heroes back to the proper timeline – all functionally-executed in fine form to resolve in time for the credits but not necessarily in a compelling manner. Finally Fitz and Simmons not only got their well-deserved and much-delayed happy ending, but also a daughter (perhaps reflecting showrunners Jed Whedon and Maurissa Tancharoen’s own story of conceiving against the odds). The whole metatextual element of  ‘this is our last mission together‘ comes true but seems shoe-horned as there’s really no narrative reason for the friends to separate off other than someone told them they would.  (It’s the kind of thing you shouldn’t think about too much). The finale’s  ‘goodbyes’ (or rather ‘reunion’) worked as a series book-end for those of us who stuck with the ride throughout and it was pleasant and heartfelt if not epic, a celebration of itself, rather than Marvel. The final word of the series, complete with familiar flying car, sums it up… “cool“.

But as Marvel enters a new phase with Disney + projects (Loki, Falcon and the Winter Soldier etc) and its big-screen ‘Phase Four’ if cinemas ever re-open, SHIELD‘s time to lay down its double-edged sword seems legitimate. Seven seasons and out feels ultimately right… it would be good – and worthy – to see some of these characters pop up in other projects, especially in big-screen outings or the occasional one-off special, but given the arms-length factor of the MCU-relations, I wouldn’t hold your breath. 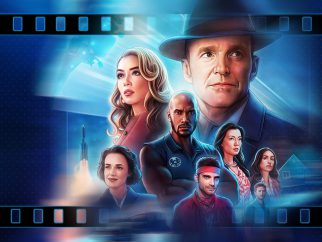